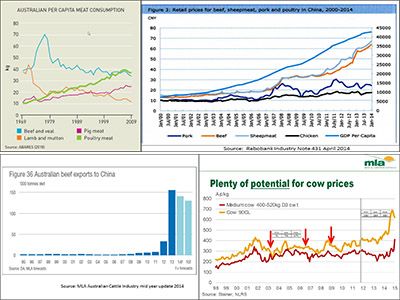 As meat prices for humans and dogs increase beyond the average Australian’s affordability, its consumption will reduce. But what if that affordability was artificially manipulated by excessive exports of Australian meat?  This article and graphs are about beef dog treats, but they can be extended to most of the main meats in Australia, including lamb, pork and eventually Kangaroo.

What if massive meat and beef price hikes were caused by a few people getting rich from the meat created in Australia because of exporting it? Meat that should be available at reasonable prices for Australians?

THAT IS THE CURRENT ISSUE.  To back up this assumption first see that beef consumption in Australia has not increased much since the 1980’s so ‘over-consumption’ by Australians is not the issue.

The blue line on the graph below shows that since the mid-1980’s our beef consumption has been steady if not declining a little, at 40 Kg per person per year. 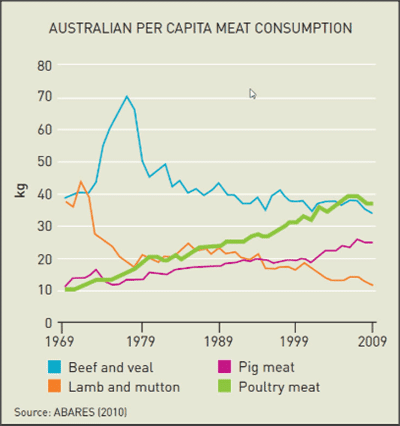 Here is my ‘beef’

When farmers experience drought or a major weather event that devastates farms,  farmers typically receive cash and other assistance from the government that ALL Australians contribute to via tax and other government collection mechanisms. That is the Australian way.

However in ‘good times’ there is NO restriction on how much meat farmers can export overseas.  They don’t always have to pay back cash given to them in hard times, AND they also have no restriction of where they sell their food MADE ON AUSTRALIAN SOIL.  And as a business, it is tempting for them to sell to the highest bidder.

If Australia made a lot more meat, or if the growing world demand was less, this would not be a problem. But with the increasing wealth of massive countries like India and China, overseas demand is causing havoc in Australian meat market prices -, particularly BEEF.

Its far from a ‘level playing field’ when many cattle stations AND abattoirs are owned or part-owned by foreign individuals or companies. This can strongly influence the decisions to export as a top priority as they already have connections overseas and are selling to their friends there.

To give you an indication of how desperate for meat (and wealthy) some Chinese (middle and higher class people) have become, consider how much Beef prices have increased in China.  The prices have soared because demand has soared.

THIS is not the main issue, the issue is that high prices (high demand) mean they will pay more to import meat from places like Australia.

Over the last several years we have experienced a substantial increase in beef RETAIL prices in Australia NOT connected to drought or any internal issues. 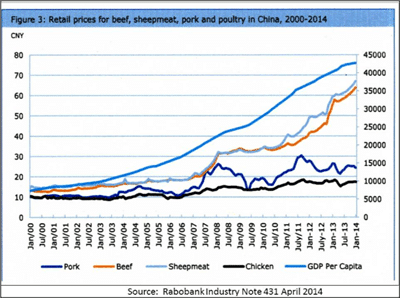 This is simple economics of supply and demand, but with an export twist. If a massive population country has many middle class people who have surged in wealth due to their countries export growth (China and India) and our farmers can sell meat to them at a higher price than they can get if they sell meat only in Australia.

That is fine, except that the cost of meat such as beef to Australian’s has increased substantially over the last few years making it unaffordable for many Australians.  Meat grown in Australia, that used to be grown for Australians to eat, is now being sent overseas and inflating local prices beyond what many can afford.

The Australian beef exports to China graphs shows a HIGH increase in Australian exports since 2013. the graph only goes to 2015 but I am sure that 2016 continues the trend (as witnessed from my local butchers and supermarkets).

And it’s true that many other countries are exporting to China but China’s extreme demand is outstripping global supply. The minuscule money (compared to many other industries such as mining etc) that beef exports add to the Government revenue (after concessions and tax minimisation strategies of large farming companies) compared to many Australian people receiving meat food price stress, is a real problem in Australia that is being neglected.

Exporting our meat and missing out on eating that meat ourselves and our dogs is ludicrous.

If overseas demand has increased sharply then local supply in Australia has had to decrease (for a relatively static cattle head number in Australia).

This spike in demand is artificially increasing Australian beef prices. I say artificially because most countries have restrictions either on foreign ownership (much more than Australia) or they manage to protect their food supplies better.

If you are wondering what kind of price increases have occurred in Australia for beef :

Ironically this graph and its upbeat title are from an industry association extremely happy in increases in prices. Shame its an Australian food staple that many people now can’t afford.

I appreciate that the current government loves ‘free market forces’ and being ‘open for business’, but just like lowering tariffs on cars imported to Australia destroyed the local car industry,  having ‘NO tariffs’ (or some kind of quota restriction) on exporting meat overseas means that meat prices rise beyond the affordable for many average Australians.

What does food security in Australia mean for beef 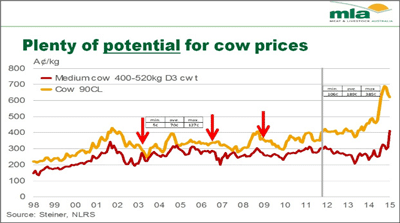 “Food security encompasses various factors that shape the food supply for individuals, families and communities. While there are many definitions of food security the Food and Agriculture Organization of the United Nations defines food security as when all people at all times have physical and economic access to sufficient, safe, and nutritious food to meet their dietary needs and food preferences for an active and healthy life (FAO 2009).” ref 1

It is said that (Australia) produce enough food today to feed around 60 million people (PMSIEC 2010).  But ‘Ref 1’ does not mention how that will effect food prices if we export much of our meat, or if we well just be left eating grains.

“There is no agreed estimate of the number of people experiencing food insecurity in Australia. Estimates of its prevalence by the National Health Survey 2004–05 range from 2 per cent in the general population to 24 per cent in some risk groups, including Indigenous Australians and people living in disadvantaged areas (ABS 2006). ” ref 1

Prices of Dog Treats in Australia with high meat exports

However people often buy our healthy dog treats because they are meat based. And most dog treats in Australia are Australian origin.

A major side effect for dog owners is that foreign ownership of cattle stations and abattoirs and higher export amounts is causing higher dog treat prices in Australia, or outright shortages.

And for most people hooked on commercial dog food for their dogs, meat based dog treats are about the only way that their dogs get decent meat into their diet. Meat being important for a species that is 90% carnivore (domestic dog)

Not having some kind of legislation on how OUR meat is exported, nor having any restrictions on how much should be kept in Australia, means that farm owners get very good prices for their cattle. But the general public (Australians) can’t afford meat for themselves or their dogs.

Perhaps its time that the Australian government started looking after all Australian’s people, not just a few select interest groups that keep them in power.