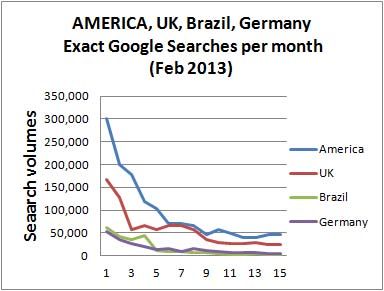 This 2013 Dog Industry report is an analysis of the online trends for America, UK, Germany and Brazil. We concentrate on these countries because America and UK have two of the largest absolute numbers of dog ownership in the world, and Germany and Brazil are both large population countries.

The core analysis of this report is 2013 data compared with 2011 data. We can see how the dog’s associated search terms on Google have changed in each country and compare between countries.

Google data is used as it is the highest used search engine and data on Exact searches per month are readily available. Note  previous analysis used three month averaging so only the most current trends could be analysed.

However as seasonal trends occur for dog terms (different types of searches in different seasons) a six month average is used to compare between the different years, and avoid any seasonality bias.

It was found that Eight of the fifteen top dog associated search terms in 2013 were the same as the previous period.

On average the eight terms decreased in search volumes by 26%

The major change in the list seems to be in the specific breeds that were included this time for instance new entries were Labrador retriever 59K, Yorkshire terrier 48K, cavalier king Charles spaniel 44K.

The overall drop of 26% in search volumes for the terms that were on both lists is a significant drop.

It is possible that the protracted recession in America has dampened people’s enthusiasm for searching (or purchasing) dogs. It is noted that “puppy” (-9%)and “puppies”(-35%)  both experienced  considerable decreases in search volumes.

Twelve of the fifteen terms were the same as the previous period.

On average the eight terms decreased in search volumes by 11%

Compared to America the search changes in regards to words and absolute volumes changed much less.  This might be attributed to the UK having a much higher search per capita value than America.

Three of the top four terms in 2013 were related to re-homing of dogs (“rspca”, “dogs trust”, “battersea dogs home”) this is a very positive rank increase in the already high humane bias of the UK list.

Brazil is a relatively low dog search per capita country and is included because of its large population size (for a good comparison to America statistics).

Eight of the fifteen terms were the same as the previous period.

On average the eight terms decreased in search volumes by 15%

The leading term “Rottweiler”  was not even in the top fifteen terms for the previous period.

The top five search rankings are taken up by specific dog breeds. Three of these were also in the top five in 2011.

It appears that it is a sign of a low search market (per capita) that has dog breeds as its main search terms.

The FIRST non breed term was pet (down 33%) and in rank ten “black dog” not previously ranked in the top fifteen terms.

Only the first six terms were over 10,000 searches per month. This is very small for a country of population  197 Million people.

The total search volumes for the fifteen terms were 2013 (242,667) UP  from 2012 (130,400) a 86% INCREASE in search term volumes.  It is noted that Brazil was starting off a low base, and the increase could also be contributed to a rapid rise in Google usage and Computer usage in general in the country.

Eight of the fifteen terms were the same as the previous period.

On average the eight terms decreased in search volumes by 9%

Similar to Brazil the top five terms were all specific dog breeds. Labrador, golden retriever, Rottweiler, Yorkshire terrier, cocker spaniel. Four of these breeds were also on the 2011 list.

It is noted that Germany like many all the countries in Europe did not fit the general (search volume per capita V Average wealth curve).  That is, the relatively low dog associated search volumes for such an advanced and economically viable country is unexpected.

Similarly having specific dog breeds dominate the top search volumes like Brazil (much less economically well distributed) is surprising.  Likewise the increase in search volumes is also surprising as it is not likely to be attributed to increases in Google usage or internet usage.

It is noted that Both the USA and UK have massive dog ownership and very large dog searches per capita. In line with economic issues felt around the world both the UK and America decreased interest in dog related searches.