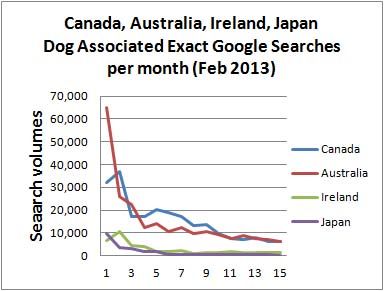 This 2013 Dog Industry report is an analysis of the on-line trends for Australia, Canada, Ireland and Japan. Out of these countries Ireland then Australia has the largest amount of dog associated searches per capita.

Canada’s profile is similar to America’s but Japan has very few searches. Like the previous report you will see that many of these countries had a decrease in Google searches about dogs from 2012 and 2013. If you want to see specifically how these types of search queries and their volumes changed, then keep reading.

Google data is used as it is the highest used search engine in most countries and data on Exact searches per month are readily available. Note previous analysis and reports used a three month averaging so we could view the most recent trends. However, as seasonal trends occur for dog terms (different types of searches & volumes in different seasons) a six month average is used to compare the different years in this report and analysis.

In Australia, It was found that TEN of the fifteen top dog associated search terms in 2013 were the same as the previous period.

On average the TEN terms decreased in search volumes by 21%

Except for the humane dog terms (RSPCA, pet insurance, pet rescue, lost dogs home) that all occur in the top ten in 2013, there is a prevalence of terms about puppies, suggesting a healthy interest in maintaining the dog population.

Australia seems to be continuing the trend for developed countries with big dog populations (per capita) in that the list is relatively stable in terms of words searched. The drop in volume is of concerns as if anything Google market share and computer usage would have risen during this period.

Canada was included in this analysis because of its proximity in location and culture to America. In previous studies, it was also found to be a very high dog ownership and dog associated search (per capita) country, only slightly behind Australia.

TEN of the top fifteen dog associated search terms were the same as the previous period.

Unlike other cost other countries FOUR terms actually had an increase in search volumes.

The unique signature of Canada’s dog associated search term profile having many specific dog breeds in it continued. NINE of the fifteen terms were specific dog breeds. The top three in 2011 were German shepherd (14k), Pomeranian (13k), golden retriever (14k).

It is remarkable that Canadians love to search for specific breeds so much (compared to other developed countries). In 2011 only four of the top ten dog associated terms were specific dog breeds, while at the start of 2013 six breeds made the top ten. It is noted that a high occurrence of specific dog breed searches in the top searches is usually the mark of less developed countries.

Ireland has only a human population of 4.5 million, however in dog associated searches (per capita) it is only just behind the UK (the highest per capita search country in the world).

So like the UK it acts as a predictor for current trends. However it should be noted that just like AMERICA this country has suffered considerable economic issues in the last few years.

TEN of the fifteen top dog associated search terms were the same as the previous period.

On average the TEN reoccurring  terms decreased in search volumes by 25%.

Like the UK, much of the leading dog associated search terms are about humane dog considerations or purchasing dogs. In the Ireland top ten of 2013 the first four are dogs trust, done deal dogs (a dog sales website), dogs, and ‘dogs for sale’. The same four, but different order as the previous period.

The total search volumes for the fifteen terms were 2013 (42,832) down  from 2011 (68,597) a 38% DECREASE in search term volumes. For a country that prides itself on looking after its dogs, and with a high dog ownership, this slump in search term activity does not bode well for dogs.

Japan search terms have been analysed as more of a curiosity than anything else. With limited accommodation space and high cost of living the Japanese spend very little time searching for information on dogs. Their absolute number of search volumes for the top fifteen dog assoicated terms are even lower than Irelands!

For Japan, ten of the fifteen terms were the same as the previous period.

On average the ten terms decreased in search volumes by only 11%, but of course this is coming off a very low base.

Besides Japan having quite a few generic terms in its main searches for both periods, such as dog, cat, pet .. it also has some curious ones not found elsewhere very often: black dog, hot dog, green dog, the dog.  This might be a translation error or something to do with things other than domestic (live) dogs.

Decreases in dog associated search volumes were also found in large population countries analysed in a previous report (America, UK, Germany, Brazil).  Because this is based on Google data, there are several systematic things that could affect the results are: a decrease in Google market share, a decrease in computer usage or a change in the way Google accounts for its volumes.

For the developed countries it is unlikely that there would have been such a major drop in Google usage or people decreasing computer usage. It is noted that Google data includes searches on their search engine plus on other people’s websites, and that each of these components  have been rumoured to contribute half the total volumes. However that should not affect the absolute values and drops witnessed in this report.

It is likely that the protracted global economic downturn in the four countries analysed here has had something to do with the decreased search volumes.

You will find that the four countries analysed that a decrease in dog associated search volumes is likely to mirror a real life downturn in dog interest and ownership. When money becomes an issue, dogs are often considered to be a luxury item. If this means that more responsible owners are left owning the remaining dogs, then this would be a good thing.