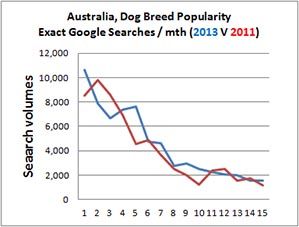 In this dog breed list analysis, we compare Australia, Canada, Ireland, and Japan not only with each other but also with the previous year for each dog breed rank.

In Australia the top three breeds in February 2013 were German shepherd; golden retriever and Labrador, but there were eight new breed terms in the top 15 dog breeds from the previous year.

Did your dog make the 2013 top fifteen dog breed list??

We use Google Search Engine Exact searches to calculate dog breed popularity because it’s the most popular search engine on earth (over 80% global market share).

The tables use a six month average of monthly Google searches on Google (and its partners) up until Feb 2013 and Nov 2011, for the ‘exact’ dog breed terms shown. Dog breed terms that are the same for both time periods have a ‘% Change’ in the 2013 column. Dog breeds that didn’t reoccur from 2011 to 2013, are shown in red font in the 2011 column.

The order of the terms is the order they occurred by most popular in the latest month of the lists. Whereas the vol/mth values may seem out of order, by comparison to the ranking, they show how the dog breeds ranked in Feb 2013 and their longer term position (vol/mth value).

The top five dog breeds in each period were:

This top five comparison is quite telling itself. You can see that German shepherd, golden retriever and labrador made the top five each time.

Eight terms in 2011 were about various dog breed puppies, and only six were in 2013.

Puppy versions can be important for forecasting short term growth in those specific dog breed purchases. In 2013 the puppies on the list were: German shepherd; golden retriever; labrador (two versions); beagle, border collie and pug.

Canada is a big dog loving country and in dog breeds actually increased its top fifteen dog breed searches by 45%.

The top 5 in each year were:

Eight dog breeds (out of fifteen) were exactly the same term in both time periods.

In 2013 you can see that in February the Shih Tzu actually came in as the third most popular dog breed, but in the whole six months up until February it was the most popular dog overall. Yet in 2011 it was not in the top fifteen at all

The Rottweiler managed fifth position in 2013 with an average of 13,450 searches up to Feb 2013 BUT it wasn’t even on the top fifteen list the year previously.  A similar thing happened in Australia – more credit to the rottweiler marketing machine!

In 2011 there were three ‘puppies’ versions of dog breeds near the bottom of the list and in 2013 there were NO puppy dog breeds on the list.

There was only one new dog breed in the top five in 2013 it was the shih tzu with 2,100.  Which is pretty impressive as its volume searches show that it was the number one breed for the previous six months in 2013 and it did not make the top fifteen in 2011.

The list was fairly stable with NINE dog breeds appearing in both years in the top fifteen.

The breeds that dropped off the list from 2011 were:  cockapoo, husky, english bulldog.

Google has approximately 30% market share of browsers in Japan. The Japanese are also said to  have a population of 128 million people and ten million dogs, but their main 2013 dog breed search term was under 1,000 searches per month?  The ALL LANGUAGES option was selected on the data file, so there should be no language issue reducing the volumes.

As you can see  all FIVE of the terms were the same in the top five for both years, just the order was different. Like other countries the previous search term for labradors was [labrador] but now it is listed as [labrador retriever].

In 2011 only eleven dog breed terms were listed in the google ‘dog associated’ searches. And in 2013 it had increase do 13 however there still weren’t enough terms to fill out the top fifteen list.

With these very low volumes statistically the data may not mean a lot. However you can see that there is great stability in the top five terms over one year, that suggests these dogs are strong favourites within the country.

The volume changes of total searches for the dog breed list over the previous time period were:

In Australia & Canada  the Rottweiler was one of the main new entrants.

In Canada the shih tzu was top ranking for the six months leading up to 2013, but not in the top 15 in 2011. In Ireland the shih tzu came from off the list to top of the list per volume of searches in 2013.

Japan has very low searches for dog breeds – the top search is under 1,000 searches on Google  per month (in any language). Japan had great stability in its top five positions with the same five breeds in the top five for both time periods.