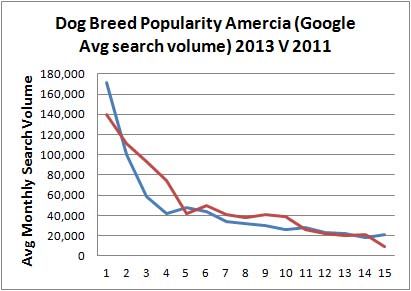 A lot of people want to know how popular a certain dog breed is, but its great to see how that popularity has changed from last year too. In this article, we compare America, UK, Germany, Brazil not only with each other but also with the previous year for each dog breed rank.

Google Search Engine searches (number of unique exact searchers) are used to calculate dog breed popularity because it’s the most popular search engine on earth and its data is easily comparable across countries.

The tables show a six month average of monthly Google searches on Google (and its partners) up until Feb 2013, for the exact dog breed terms shown. If a dog breed exact term is represented in both years, then a % Change value is shown. For the dog breeds that don’t make it from 2011 to 2013, these are shown in the 2011 column in red font.  The 2011 data is a six month average up until Nov 2011.

The very obvious characteristic of this breed list change is that only SIX of the dog breed search terms in Nov 2011 remained in the top fifteen list of 2013. You can see that the ones absent in the 2013 list have no % Change value, and the ones in 2011 but not in 2013 are shown in Red in the 2011 list.

Seven of the dog breeds between position six and fifteen in 2013 are “puppies” variations of the breed.

In fact a dog breed + ‘puppies’ search is so trendy, that after the fifteenth dog breed on the 2013 list, the next EIGHT dog breeds are “puppies” variations.

Most of the terms that were repeated between lists had a decline.

The shih tzu was not in the UK top 15 list of 2011, and in neither list for America. In 2011 the only mention of shih tzu in the UK was [shih tzu puppies for sale] and it had a volume of around 12,000 (not in the top 15). There must be some serious marketing or organisation searching going on for this term to come from next to no searches in 2011 to be on the top of the UK list.

In the UK, the major dog breeds lost from the 2011 list were near the bottom of the list and were for “puppies for sale”  variations. The highest term lost from 2011 was the fifth term [cockapoo] (26,283)

One of the most fascinating aspects of the list is that at the bottom of the UK 2011 list there were in 13th position: [boxer puppies for sale] 9,600 and 14th position  [husky puppies for sale] 8,450.   However in 2013  the first mention of a boxer variation is [boxer puppies] around 5,400, which is 35 ‘dog associated’ terms below the fifteenth highest dog breed AND  the first mention of husky is [husky puppies] even further down the list.  YET,  in America both the Husky and Boxer are firmly still in the top 15 of their most popular dogs.

Germany is just across the channel from the UK, but it could not be much more different in its search habits for information on dogs.

Germany has near 90% market share by Google for search engine usage, so the massive drop off and thin tail of terms in the Google dog associated searches, and dog breed lists drop off volumes is just a function of the populations search habits in Germany, not a reflection on Google. Note the data reflects searches for all languages in Germany too.

While the top term in Germany has near twice the searches of the top term in the UK, the fifteenth term on the Germany list has 1,100 searches compared to the UK’s 9,967   Thus overall the UK search a lot more on ‘dog associated’ information on Google than Germans do.

Like the UK, a few of the dog breed terms lower on the list in 2011 were “puppies” variations. which in 2013 have been replaced by the adult dog breed versions.

The very curious part of this UK dog popularity list is that in 2011 German Shepherd was eighth on the list with volumes of near 1,000. Most other countries have this breed in their top three searches, even though the dog was created in Germany! On the 2011 list, there were also variants near the bottom of the fifteen such as [german shepherd dog], [German shepherd puppies] these had very low volumes too.

In 2013 in Germany, the [german shepherd] is thirteenth ranked dog breed with only 1,500 searches.

The shih tzu in 2013 is ranked sixth with 15,350 average monthly searches, while in 2011  it had under 100 searches per month. So it is massively rising in both the UK and Germany but not America.

A big thing to note about this list is that the Rottweiler and the shih tzu which are number 1 and 3 respectively on the 2013 list, were not in the top 15 in 2011.

You can also see that after the second placed breed in 2011 the search volumes dropped of very fast, yet in 2013 The drop off doesn’t happen until fifth place.

The lower part of the 2013 America list has “puppies” versions of dog breeds.

In the UK:  the shih tzu came from below fifteenth in 2011 to top of the UK dog breed list with 34,333 average searches over six months.

In Germany Four of the top five dog breeds in 2013 were also in the top five in 2011. There were a lot of searches in germany in 2011 for “pupies” versions of dogs but very few in 2013. The rottweiler  from below 15th position in 2011 to third in 2013(23,833). This is great for a German origin dog, but bucking the trends of most other countries, the German shepherd was well out of the top five list at thirteenth position.

On all country lists [labrador] of 2011 seems to have been replaced by [labrador retriever] however Brazil had both terms in the top 15.

The [cockapoo]  has disappeared from most countries lists since 2011

Brazilian dog breeds increased from 96k to 219K a jump of 128% – largely helped by increased computer usage in that country.