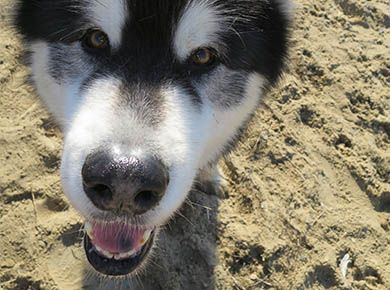 Lately in the dog parks my conversations about homemade dog food take an interesting turn. Its a conversation that is usually as intense as their love of their dog – but usually its because they HAVE to hold onto their belief, science doesn’t get a look in.

For instance did you know that only 3% of people in Australia make ‘homemade dog food’ for their dogs. And the usual reason is that they THINK they are providing better nutrition for their dogs. A noble cause and one I am pursuing too.

Some people will say they hate all the additives in bought dog food (but buy any old dog treat for their dogs). A few people I meet say that they think their dogs are allergic to the grains in the dog foods, so they either buy ‘non grain’ dog food, or make their own dog food.

Did you know that ‘non grain’ just means that they substitute a potato or other vegetables so that it is still at least 70% vegetables. THIS is about the same amount of NON-MEAT content as found in most manufactured dog food. So the value is mostly in marketing not in nutrition.  And the most expensive kibble on the market has 50% dried meat in it.   Yet our dog treats have 80% plus or 100% for most of our range … hmmmm.

If you look up information on dog food allergies, you will find that there are a very small amount of dogs that are actually allergic to a specific grain or meat. That exclusion dog food diets are the best way of finding what the problem food might be. But they are costly one way or another and most people don’t bother doing it correctly, hence they get unreliable results and assertions.

Why would you put vegetables in your dog’s diet?

There are a few people who suspect that grains are bad for dogs, and know that they are only putting dog food as a cheap filler. But what is the difference between grains and vegetables? Both grains and vegetables have plant protein (not readily bioavailable – easy to use for dogs). Both have carbohydrates – sugars that dogs don’t need because they can get their energy from meat and fats in meats.

The one value I have found in vegetable matter in a dogs diet (carnivore) is the indigestible fibre to make a dog’s stools more solid. This helps the health of my dog’s intestine (since I don’t feed him the whole animal that would naturally provide him animal based fibre).  THAT it the ONLY reason I include a little bit of kibble in my dog’s raw meat diet.

The problem for a lot of people doing a homemade dog food diet is that they don’t get the calcium and phosphorous amounts or ratio right (like you will if you include the right amount of raw bones, or cooked large dog treat bones) and they don’t include enough Omega 6 and Omega 3 in the right ratios, or from the proper sources.

You will find that manufactured dog food has the right ratio of Omega 6 to Omega 3 (typically 7 to 1), but this is just a ratio, not useabiliy. Dog food Omega 3 sources are almost always from Flax, which is in the wrong form for conversion to a useable form (DHA and EPA components as found in salmon fish oil). Flax Omega 3 (ALA), means that by the time it is converted to the right chemical compositions there is very little left, so you will get a dog with a shiny coat (because of the Omega 6) but if it has a skin allergy, it will not be helped due to the lack of Fish Oil Omega 3.

Fish Oil is not included in commercial dog food because it is more expensive than flax and it will go rancid if exposed to oxygen. That is, when you open the dog food packet and leave it exposed, so flax seeds keep dog food unspoiled, not nutritious. THIS is what happens when you don’t use animal sources of food. This is the price of convenience.

While going grain free might seem like a great idea. NOT going vegetable free is still meaning your carnivore dog (with the same digestion as their wolf ancestor) will still not get enough meat protein, fats and the right amount of calcium (via raw bones or properly dried large dog treat bones).  Dogs are fed only a certain amount of kilojoules per day (for their exercise, age and weight needs), and whatever you use with vegetable matter, limits the amount you can use from meat products (that have the nutrients their bodies can readily use).

I know this because I have studied dog nutrition via nutrition books and science articles with peer review (not from blogs). I have spread sheeted the nutrition a dog gains form various forms of meat, grain and vegetable mixes, and I have properly constructed a mainly raw meat, offal and bones diet for my dog that exceeds even the affco standards for dog food. But using bioavailable sources.

Note aafco standards only work on amounts of nutrients, not the source – they conveniently don’t mention the source, which is how conveniently much of the vitamin and mineral shortfall from whole food ingredients can be made up from pharmaceutical companies… but that’s another story.

My dog’s diet IS the healthiest dog diet on earth, but I know that from my research and scientific study of the data available. NOT because some corporation sold me a bag of grain, or because I just add a little bit of random meat to a whole mix of veggies (good enough for us omnivore humans).

DOGS ARE CARNIVORES (if you want to pick hairs they might be 90% carnivore, but they are NOT 30% carnivore). Vegetables are nice to look at in their bowl, have carbs (sugar) and many dogs will eat them all up, but some dogs eat poo too. Don’t consider a dog eating something you put down as them knowing what is best for themselves.

A high meat percentage dog treat is often better than many grain or vegetable based commercial dog foods on the market, and certainly better than any other type of dog treat you can buy.

Blog
Comments for this post are closed.
Previous reading
Healthy dog treats are perfect supplements for commercial dog food
Next reading
Why you should choose Kangaroo meat for dogs as dog treats all the time?