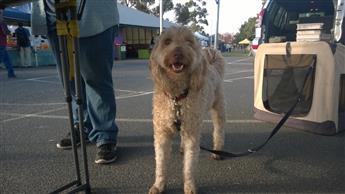 I have been doing Fresh food market stalls for about three years now and over the last few years I have seen more markets close and have high stall turnover and struggled to break even than I ever thought possible.  So you might ask why do it or why are the markets going so bad.

Dog Treats in Australia and the Market supply demand equation

Ever since the 2009 GFC things never have been the same I am told. Everyone is holding onto their money. But if that was true people wouldn’t be buying cars and houses or general white goods, and those sectors are still relatively healthy.

The issue with DEMAND in Dog treats at markets is purely a numbers game. If one in four households own a dog, and there are 1000 people through the gates that might mean an average family size of 300.  If 1 in 20 of those groups wants to buy treats then there will only be 15 sales.  If on average they buy two small packs of dog treats, that doesn’t cover the cost of the market even, let alone wages.  Markets just need more visitors!

Dog treat DEMAND at fresh food markets Versus the supermarket

In Australia I read about people banging on about buy Australian, buy organic, buy local. But this mantra is backed up by TINY numbers of actual people doing what they say.  IT is a hell of a lot more convenient to shop at a supermarket and make the corporation and shareholders rich and get substandard food, than make the effort to go to a weekend market.

If people loved fresh food markets so much, they would attend them regularly and tell their friends. They would do it on cold and hot days, because market stall holders pre pay to be there regardless of the weather.

If a market stall holder can’t make money, they stop going to the markets, and markets die, The closure of so many fresh food markets over the last few years proves that people cant be bothered.

This is the single biggest issue I have found with all markets.

Market operators like making a large profit. They don’t care if stalls turnover at the market, as long as they can get a sufficient number of stalls to make their money.

The usual model is that market owners set up shop in a primary school. Give a gold coin donation from market goers to the school, and in return expect the school to give brochures to the students, who take them home to the parents who are loathe to be free advertising machines.

These brochures rarely end up distributed to sufficient homes of people who are bothered to act on it. Market owners tend to be very lazy and blame the school and the stall holders and don’t change their own efforts until the markets is almost dead. Then they just move onto a new market and repeat the mistakes.

Social media campaigns are either very light and free, or if paid for, also very limited funds are spent.

I am often told that there are too many fresh food markets on in Melbourne. And if you look at how many are held over a month, you might find TEN per weekend. But that is MELBOURNE WIDE.  Each suburb mostly attracts visitors from that suburb or nearby. There is plenty of room, if advertising was high enough and people bothered to go to the markets.

Melbourne is a big geographic region, so there should be plenty of room for ten or fifteen markets per weekend, but each one seems to struggle to stay alive more than two years.

Then there is the one dog treat company that has about sixteen markets sewn up with their presence, so they charge massively higher prices than anyone else (including us) and get away with it! They were just lucky to be first in at these markets and now they are keeping their spot.  You can’t fight against the incumbent when usually only one dog treat stall is allowed at each market. That is a fair rule, but not prohibits any other dog treat company from selling at the main markets.

Apathy by the public, domination by one or two dog treat companies and poor advertising by most market companies means that fresh food markets in Melbourne are massively under supported and regularly fold.

Under supported markets have random stall holders turn up, so the people that do visit don’t stay loyal as they don’t know who will be at the market next week.

Market companies overcharge stall holders (usually $60 plus for the five hours you are there) so stall holders struggle to break even unless they put up their prices massively , which discourages purchases (unless the clients are unaware of the real price of treats they can pay elsewhere online (such as at our shop).

Markets are a very unregulated industry, but one of the few ones where small businesses without a massive advertising budget can try and get exposure.  The above reasons are typical of why small businesses (who sell fresh food products) are failing in Melbourne.