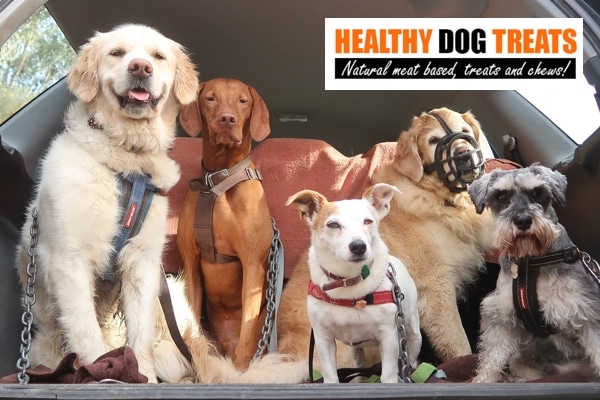 Previously we reviewed Dog Food Advisor articles for PUPPIES and MATURE dogs.  The reason we did this is that we know that carbs are not vital to a dog, and most dog food includes 70% carbs to increase corporation profits, not the health of your dog.

However, chances are you have a dog somewhere between the puppy stage and adult stage (up to but not including mature aged dogs).

We now review what recommendations they make for dog food for these dogs, and what we believe are more important for your dog’s health, including the types of treats that provide BETTER nutrition than most regular dog food.

Since almost every dog food on the market includes greater than 50% grain or plant matter in it to keep costs down, you should not be surprised that the links that the reviewer provides to amazon (and they get money from) also include a LOT of plant matter.

However, we will also look at their guiding principles for small dog food, and how it differs from regular or larger sized dogs.

It should be noted that IF there is anything special about small dog, dog foods (of the commercial variety), as opposed to regular or large breed commercial dog foods, it might be because all domestic dogs are evolved from wolves, AND the original ‘domestic’ dogs were closer to wolf size.

This means that ALL small dogs are the furthest removed from the wolf, in size at least.  However, it should be noted that the general digestion principles still apply for small dogs, as they still have proportionately short intestines and high acid stomach levels (when digesting food) etc.

ALL small dogs were evolved by ‘man’, by successively breeding smaller dogs in a litter with smaller dogs as they went on – and this changed critical things like activity levels and how long the smaller dogs stayed in puppy stage compared to the wolf and larger dogs.

The DFA blog suggests that small dogs are considered those under TEN KG.

Like all of the better commercial dog foods the advisor recommends those that mostly have MEAT as the first few major ingredients.

Truth being that not all grains, or all plant matter are created equal, in nutritional content OR digestibility (bio availability) for a dog. So the tag “GRAIN FREE” is more a marketing term to extract more money from your wallet or purse.  NEITHER general plant or GRAIN are as good as Muscle meat for a dog.

One thing that they do note is that most small dogs have a higher metabolism in general than larger adult dogs. NOT true for all small dog breeds, as some where bred to be purposely very sedate so that the owners could have an easy life.

Amazingly many of the small breed recipes include up to 20% fat.

If you regularly feed a dog a steak with 20% fat on it, you should not be owning a dog.  High levels of fat lead to obesity and often pancreatitis.  Fat is about 2.5 times the energy level of protein or carbs, so if you are trying to maintain a dogs healthy weight wasting the energy content of the food on general fat (instead of omega 3)  is a very wasteful thing indeed.

It appears that they are happy to award high honours to dog foods that have some meat as the first few ingredients, are small pellet size (so the dogs can get easy purchase) and are radically high fat levels.  Some with or without grain, but all have LARGE amounts of carbs for no healthy reason.

One thing we can safely agree on is the high quality and QUANTITY meat content in dog food makes it better. Yet NONE of the ones reviewed are anywhere near HALF that of our jerkies.

Be aware that dog food labels don’t require any maker to put the meat content (dry) on the label, so most get away with 30% meat or less. But we know that dried meat jerkies have 50% or higher protein content of the whole treat, so seeing a low protein value on an ingredient analysis of dog food is proof of low meat content.

Our meat treats are 100% meat, and meat you can see the grain in so you know it’s a whole meat. Not hidden low quality meat or pretend meat (soy TVP that you find in many wet cans of food). 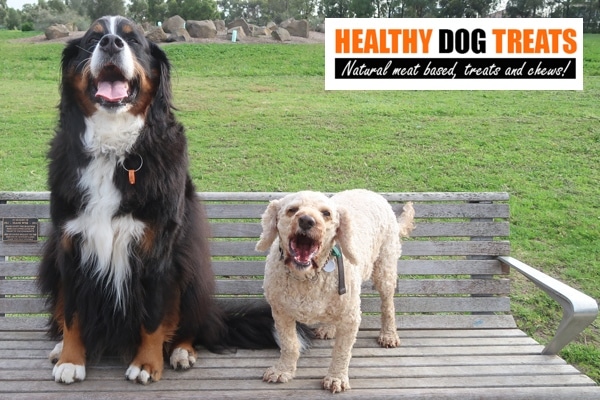 If small dog breed ‘dog foods’ have a few meats as the first few ingredients followed by a LOT of plants, and high fat content, what do they suggest Large breed dogs should get that are any different?

They say that there are two types of large dog food “One designed for adults’ and another for ‘large breed puppies.“  They say, the large puppies need higher levels of protein and calcium/ phosphorous to support bone formation. We say almost EVERY dog needs MUCH higher protein that is provided by regular commercial dog food.

They note that “Large breeds puppies (like labs, goldens and German shepherds) don’t reach adulthood until 12 to 18 months. Yet giant breeds (like Great Danes and St. Bernards) can weigh over 100 pounds and take up to 24 months.”  That is the time that you can change over to regular commercial dog food according to them.

This is a double-edged sword for commercial dog food companies. Yes, they put oil and other things on top of their pellets to encourage over-eating to sell more product. But they also know that a large breed dog getting bloat and dying is a bad look for their brand. SO, they compromise and make soft large pellets for large breeds to eat.

These are easily consumed and often swell in size in the dogs stomach so large breed dogs often need main meals in several sittings.

Because the pellets are made up of finely milled grains or plant material to get through their extrusion machines, these grains easily stick to your dog’s teeth, requiring you to brush them or buy more fake tooth stick made by the same companies.

Ironically if you feed a dog an animal-based diet, the meat doesn’t include carbs and doesn’t stick to your dog’s teeth to corrode them. But if there is any debris from other foods you add, things like roo jerky, beef jerky, roo tendons etc can act like a natural floss to remove loose material from the tooth. Naturally.

Some large dog food recipes include “ glucosamine and chondroitin … to supports bone and joint health in these larger sized dogs.”

You will note that the amounts added are often TRACE amounts when compared to the real natural sources we sell like shark cartilage and Green lipped mussels. Don’t rely on your dog foods to give sufficient amounts of Omega 3, glucosamine or chondroitin.  Dog foods are made for low cost and not as a health benefit. If you are feeding a commercial large dog food diet, ensure you add proper NATURAL animal-based products as well.

They say that one of their top reviewed large breed dog food includes“ the perfect amount of fat and calories to help maintain a healthy weight for a dog of this size. “

Most roast beef or roast pork or chicken from your supermarket will have fat levels around 10% or less  (when you cut off the obvious big slabs of surface fat.  MANY of the commercial dog foods have much higher, because fat is cheap and makes the pellets more palatable, so they can sell you more.  Extra fat means less calories can be provided from protein, since meat is full of quality protein for carnivores.

Another review says that a product is “a higher quality food with an abundance of animal protein and nutrient-rich vegetables like spinach, kale and broccoli.”  You will be hard pressed to find any scientific articles that give you genuinely important reasons to add ANY plant matter to your dog’s food.

This is because commercial pellet dog food is typically packed with very high amounts of EXTRA minerals and vitamins (see your ingredient lists for the sperate types they add) just to reach the excessive affco minimum amounts on these types of nutrients.

While meat won’t have all of the excessive ‘minimum vitamins and minerals’ SUGGESTED by affco, the extra amounts that dog food companies dump into the product to conform to that voluntary standard makes using plant matter to supply “nutrient-rich” matter, completely redundant. It just adds cheap bulk.

Most of our clients buy and our dog treats because they know they are healthiest for their dogs. But if you are not convinced of that, even just buying our meat-based trets to supplement the low protein amount in commercial dog food …  can only provide a positive effect for your dog.

If you have a very rare dog breed that can’t have protein, or they have congenital organ damage that precludes this, these are the only exceptions to dogs that SHOULD have more meet than commercial dog food will provide.

Blog
Comments for this post are closed.
Previous reading
Kangaroo is becoming a critical dog treat, not just because of its price.
Next reading
DOG FOOD: The Top 10 Best Puppy and senior age food TRUTHS