HEALTHY DOG TREATSBlogBlogKangaroo is becoming a critical dog treat, not just because of its price.

Kangaroo is becoming a critical dog treat, not just because of its price. 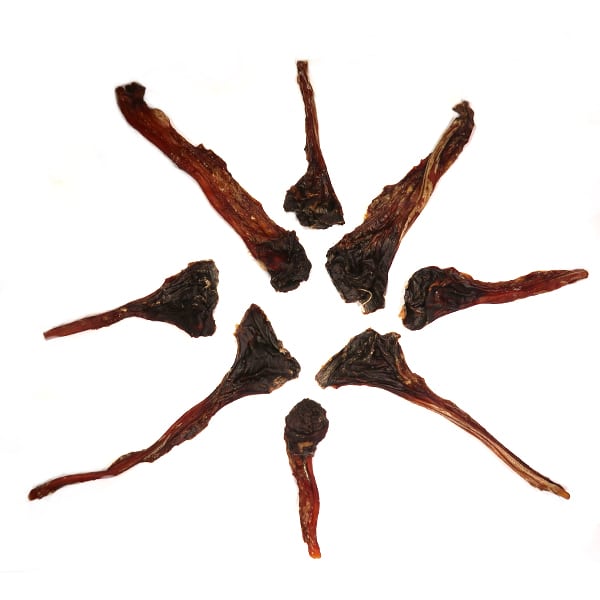 This article looks at how exports have pushed up the price of Beef in Australia (and beef dog treats) and what that means for Dog Owners and the value of the healthier alternative – Kangaroo Dog Treats.

As I have discussed at length in other Articles its not that Australia’s appetite for beef is skyrocketing, it’s our that some of our farmers / corporations are profiteering by selling off many parts of the cow, (including Bully Sticks for Chinese market aphrodisiacs), that is making many farmed Australian meat treats much harder or costlier to get.

Once people realise that this is a valuable resource that would be wasted if the authorized culled numbers are not used for human and dog food consumption, they are better able to understand that its one of the best and healthiest ways of feeding your carnivore based domestic dog.

There are many various cuts and types of Kangaroo dog treat, and basically a specific treat for any sized or aged dog.  From the very soft composite treats like roo balls and sticks, to the many single ingredient Kangaroo dog treats we sell.

The hardest treats are the kangaroo clod bones (legs), but we also sell the world’s best natural dog teeth cleaning option, Roo Lumbar, roo ribs, and occasionally other parts of the roo tail. They have a great honeycomb structure that promotes healthy gums and provide nutrition at the same time as there is plenty of meat between the bones.

THESE are still the best medium dog chewer treats in Autralia, with 100% roo meat and single ingredient options (no filler).

What Kangaroo Offal is important to a dog’s diet?

The trickier area is Kangaroo Offal. I come from a raw feeding (practitioner and analysis) background and understand the vital place that offal provides in a dog’s diet.

Yes it is the original ‘super food’ for dogs, with high iron levels. Protein levels etc. it is also typically much less expensive than the straight meat jerkies (which have recently seen a surge in demand as Aussie dog owners increase demand for this great clean product) … but ‘offal’s are not offal’s’.  Too much of any Roo liver / kidney will be VERY rich for a dog and that is why raw feeders keep offal amounts to under 5% of total energy intake per day.

Yes, you can use just about every part of the kangaroo as a dog treat, and yes, they all have different nutritional bases and textures and chew-ability. But its worth noting that things like Kangaroo Heart are more of a novelty than a great nutritional boost. Unlike Kangaroo Liver (a true super charged organ), ROO heart is essentially MUSCLE MEAT, that will have different texture than roo jerky, but not provide a much different positive increase in nutrition over roo jerky.

The one anomaly in this is Roo cubes, but this is because of its use, rather than nutrition difference. Like all dog treat lungs (like the Beef cubes and Lamb cubes we sell on our site) the advantage in the cubes is that they are very low density, have a great crunch when first bitten into, then safely crumble in the dog’s mouth (like human violet crumble treats).

You are buying any of the meat cubes we sell for ease of eating and the fun of the texture more so than the nutritional boost. And of course, because they are a SINGLE INGREDIENT treat with NO ADDITIVES!   Yes, they have good protein but their main value is being softer than roo jerky for dogs that don’t have a lot of teeth left or are very young or old.

Currently we have about 15 ROO dog treat varieties that can provide something for every dog. We will add to this list over time, but these will typically be niche treats that provide a slight tweak on nutrition, texture or price.  Everyone has their Kangaroo dog treat favourite and will swear by its great value. But we know the incredible clean protein value behind this amazing Australian resource, that is too good to be wasted.

Note that the first time your dog tries ANY new meat or protein source, they are likely to have an adjustment time, as their digestion works out how to best process the meat. They can have loose stools on the first few tries, so we always suggest trialling in small amounts.  If they have loose stools on small amounts forever, then they are a rare dog that might have sensitivities to the meat that they can’t overcome.

MOST dog treat companies don’t talk about this because they are afraid about ‘well meaning’ conservative group back lashes, but without knowledge, some dog owners are unjustifiably scared away from using the best meat you can get for you dog in Australia.

Also discussed many times before, Kangaroo is Organic, lean, High in Omega 3 and the ideal protein source for humans and dogs alike.

Each Australian state monitors kangaroo sub species populations in many sample areas around the state and update their quota amounts based on those populations and environmental conditions (floods, droughts etc). For instance, the 2020 Queensland report (see reference) says that “Quotas are set up to 20% of the estimated population for each species in each zone.”  They regularly survey herd numbers and only included sub species that are in over population levels.

Kangaroos are culled so they don’t over populate (caused by a complex interaction between farm lands, rain cycle changes, predator removal like dingoes etc).  They are considered a ‘pest’ in many regions, and their processing creates many jobs in rural areas.

Typically, less than one third to one half of most state Roo quotas are ever filled, meaning that herds still remain in higher numbers than estimated to be ideal for their and our optimal conditions.  If Kangaroos are not used as Dog Food, they might end up either just buried in the ground or as a much less valued resource like fertilizer. THAT would be the real waste and tragedy.