What are people searching for Dog Treats, really looking for in Australia (google 2020) 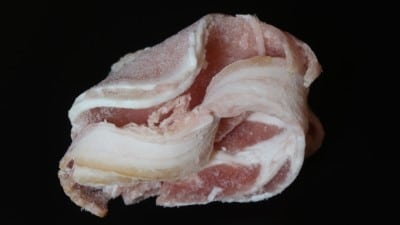 Over the last twelve months, there were only TWO food ingredients that made the top five Google trend searches in Australia related to Dog Treats.

From February 2019 to February 2020, the top two dog treat related searches were

But before we explore the value of bacon in dog food and treats, we should understand that neither of the top two terms are necessarily healthy foods for dogs.  If you want to run ahead, we have produced the top 20 dog treat associated topics on Google in Australia over the last year in the appendix.

Many people think that Bacon and Coconut oil are great things to feed their dogs, but in excess, even in medium amounts, both of these can produce substantial negative health effects on dogs. Before we get to that, lets see what meats are the most popular that are used in dog food and dog treats and why …

Beef and chicken are the major MEAT dog treat ingredients, but kangaroo and Fish, which are much healthier, than these two leading meats, are not used anywhere near as much in dog food or dog treats.

Beef and Chicken are the leading meat-based dog treats (flavours) and major ingredients in dog food, because they are readily available in the human grade food stream, and so the off cuts are typically the cheapest of readily available farmed meats. It’s that simple. PROFIT.

Besides ease of access and cheapness, affco (the voluntary American dog food nutrition organisation) suggests what should be minimum and maximum levels of protein etc have a minimum protein (amino acids) level.  It is simply because almost no mix of natural vegetable protein can achieve these amounts that any meat is used at all. This means dog food makers are typically forced to use at least 30% minimum of the cheapest meat in dog food (chicken and beef).

Concentrated vegetable ‘goop’ is being trialled in vegan dog food (stuff fed to HERBIVORE livestock), but Chicken and beef meats and by-products are the easiest way to reach minimum standards of affco protein amounts, while feeding dogs a little meat, and being able to put a big picture of meat on the front of these packets.

The issue for some dogs is that these common meats can cause allergies (like some grains) and they have fat levels around 10% which is not ideal for obese dogs or dogs with pancreas issues.

Why Kangaroo and Fish Dog treats should be popular, but aren’t

Roo and fish meats are typically the most common ‘wild’ meats in Australia, so are naturally organic.  That means no added hormones or anti-bacterial in the meat, and they are low allergenic and low fat.  And the fat that is in them tends to have higher levels of Omega 3, which is good.

The reason you don’t find them in dog food or supermarket treats that much, is they cost more to produce, and large companies prefer profit over dog health.

So why are there very few pork products in the dog food or dog treat market?

Basically, too much demand for pork in the human market.

There are also religious concerns over this meat meaning that companies wanting to maximise their dog food reach won’t make products that can’t be made halal.

You will find that Healthy Dog Treats sell a few pork dog treat products such as skin and bones, but not a pork jerky. That is because it is just not readily available to manufacturers to use.

The reason that we would not recommend BACON or pork jerky in large amounts, even if it was available, is the same reason that doctors say for humans to restrict consumption of bacon. Bacon is high in saturated fats. Dogs often have difficulty in processing high levels of saturated fats and can either vomit the meat up, or it can cause pancreatitis.  Dogs on a low calory or low-fat diet should not eat bacon at all.

For 20,000 years since dogs evolved from wolves, and for millennium before then when they were wolves, dogs just needed regular meat in their diet.  Back when dogs hunted their own food, they didn’t exist on a diet of pigs, and even in areas where pigs were plentiful, wild pigs would probably not have been easy to catch, so the hunts would have been long, burning off any extra calories that the dogs consumed by eating pigs.

The wild dogs weren’t sitting at home on the lounge, or going for the occasional casual walk, so any saturated fat from an animal would be quickly used up in the wild.

If you find a low-fat pork meat product, be very wary. It is not likely to be low fat because it’s a quality treat, but because it’s been highly processed or rendered at high heat, denaturing the proteins and rendering it useless for health.

The google search that humans make for bacon dog treats on google, is just wishful thinking and looking for something that they themselves enjoy, usually as a rare treat, not something that is ideal for dog’s health

There is a mass of misinformation online about the miracle use of cocoanut oil for human and dogs.  They say it cures almost as many diseases as CBD oil is now heralded as helping.  And just like CBD oil, the miracle boasting articles are tantamount to spam. They are there to make the sellers rich in an unregulated market.

Coconut oil has a LOT of different fats (oils) in them. The problem is that besides the Omega’s they also have a LOT of saturated fats in them.

Some people say to feed to dogs a lot of coconut oil for digestion and general health. All this is typically doing is adding extra energy, Kilojoules, at the expense of extra meat protein that your dog’s actually need.

Some say that coconut oil is great for the dog’s skin, because of its Omega 3 content. However salmon fish oil is one of the highest, natural sources of clean Omega 3 oil, without all of the additional saturated fats and extra KJ your dog doesn’t need.

Buying salmon fish oil and using in the correct quantity and ratio with Omega 6 oil, or buying dog treats high in Omega 3, is a MUCH better idea.

The issue is that if owners land on human food sites, or sites where companies make money from selling bacon or coconut oil to use on their dogs, people will think there are more benefits than negatives.

There are almost no articles stupid enough to warn you about feeding your dog meat. Because meat is the one thing that all dogs need. Most dogs don’t get enough quality meat, and low-fat meat is typically what most dogs need.

It is the lack of quality meat in most dog’s diets that many believe is the cause (particularly in mature dogs) of the myriad of disease that affect domestic dog’s health lately.

If you can’t regularly walk your dog off lead, your dog is already starting behind the ball in fitness and health.  If you then only feed them mainly vegetable-based dog food it is important to supplement that with MEAT in their food, either by raw feeding or by adding LEAN quality meat based dog treats.

Just because it’s a trend in the media or online doesn’t mean it’s a good idea. It rarely is when it comes to a dog’s diet.

Blog
Comments for this post are closed.
Previous reading
Why DIY dog treats can be bad for your dog (Google data 2020)
Next reading
A D.I.Y Summer treat menu for your pooch!