HEALTHY DOG TREATSBlogBlogDo you know the 2 breeds of dog that have a missing gene that means they CANT STOP EATING?

Do you know the 2 breeds of dog that have a missing gene that means they CANT STOP EATING? 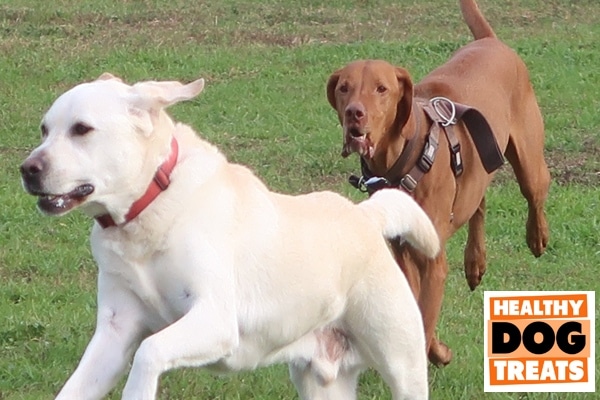 Picture this, one of the most universally loved, owned, and human service dogs has a genetic mutation, that contributes massively (in theory) to their perceived intelligence and bonding with owners. But unfortunately, it is likely that the gene also contributes to its inability to sense when it has eaten enough.

It sounds like the plot of an A grade dog movie, but only now that genetic sequencing technology is so wide spread, scientists have discovered that the breed of dog that has the mixed food signals is the legendary LABRADOR retriever!

While Labradors and their crosses are claimed to be the THIRD most popular dog in Australia (petmarket 2020), Labradors make up a massive proportion of ‘human assistance’ dogs too.

Note, assistance functions are very different from ‘Working dogs’ or the ‘guard dog’ groups. Both of the latter play a major role in specific human help categories and while all three of these groups have important tasks in society, no breed works harder in one-on-one relationships and VARIED roles with humans than the Labrador retriever dog.

From its job as ‘seeing eye dogs’, Australian customs, military etc the Labrador is a faithful, reliable, intelligent, playful dog – but have you ever wondered what might be behind its unique position next to humans in the 21st century? Hint, its just NOT their nose!

FOOD. And the love of food, and the actual, gene deletion, define this dogs’ ability to ‘get enough’ of the stuff. To paraphrase Depeche mode. Labradors JUST CANT GET ENOUGH !

I will now briefly go through the scientific explanation of why labs are predisposed to never gaining satiety, then look at why ALL dogs are food driven, and what that means for their diet.

What the ‘Canine POMC’ Gene has got to do with a Labrador being super HUNGRY!

This science paper  referred to in at the bottom of this article, ‘Highlights’ section gives a perfect summary of the flow of events that causes the Labrador to be SO attentive to humans, thus making it an excellent service dog.

Basically, the sequence of evolution to get to this point is this. Wolves began evolving into domestic dogs 20,000 odd years ago in China. To do this it meant that wolves predisposed to cooperation with humans for food and companionship thrived. Hence “domestic” dogs have ALWAYS had a desire to like humans, and expect that they would provide food, for service and love.

The only caveat to this is the ancient dog breeds, and some of the hunting breeds of dogs that we still have that prefer solo missions (and hence can be more problematic in training).

Why the Labrador retriever MUST have food ! 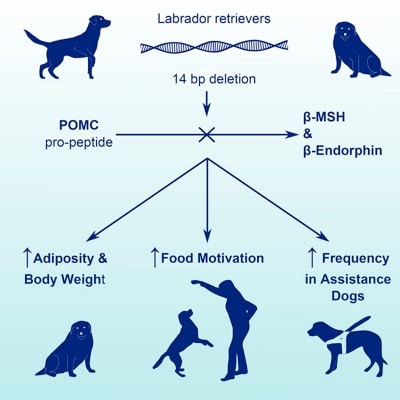 What the above chart is attempting to explain is that :

“Of all dog breeds for which data have been reported, Labrador retrievers have the greatest documented obesity prevalence”. Ref 1 The authors say this can be connected with reduced dog exercise, over-feeding high calorie dog food etc, but for the lab its more complicated that just that.

“There is evidence to suggest dogs are able to influence both the type and quantity of food offered to them by their owners. It is possible that behaviour changes related to the mutation are sufficient to lead to increased food intake (either by scavenging or soliciting owner-provided food).” Ref 1

We (HDT author) see this at the dog park all of the time. Young labs are typically very social and playful, fast runners. But when we offer treats to a pack of different breed dogs, labs are typically at the front and centre to be fed, even if they are not part of our pack. They will put their own personal safety, and social etiquette below the need to ingest food.

Then we see older labs (age 6 plus), who might have slowed down the running, but are just as insistent on getting fed first, on pleading with their eyes, on pawing us to gain attention.  But how is that behaviour different from any other dog you might ask? 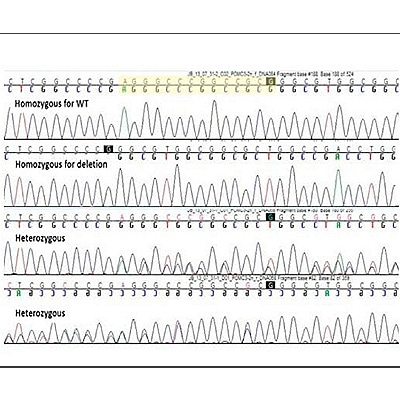 “The gene mutation means The role of β-endorphin in regulating appetite, satiety, and energy balance is less well understood, but it has been proposed to underlie oro-sensory reward in high-need states or when the stimulus is especially valuable.” Ref 1

Perhaps the competition factor for winning food, a finite resource, when there are other dogs in the dog park, to a hyper-excited dog might drive a lab to over achieve in winning a treat. But if the above suggestion is correct, it is likely that the missing gene also goes to the core of SATIETY.

Essentially this theory is that no matter how much food a lab (with this gene missing) can never feel full. It just can’t get enough. (more research is going into proving this as we type).

Why the Labradors missing gene makes it an ideal service dog.

“The particularly high allelic frequency of the POMC deletion in assistance dogs is intriguing. Temperament and “trainability” are the main drivers for selection of assistance dogs, and “positive reinforcement” with food reward is a mainstay of puppy training. “ ref 1

This suggests that because some labs (not all labs are missing this gene), can never be satisfied by any amount of food they eat – then they will always strive to be rewarded with food for completing a service task. They can never get complacent, as food in the wild means literal survival.

Task failure in training for something like customs sniffing out drugs or food, means no treat. With every fibre of their most excellent sense of smell and desire for more food in their belly demands that they become smarter and smarter at positive completion of tasks. They will literally do anything to be rewarded with food.

Why ALL domestic dogs are food driven, and what that means for their brain, body and diet. 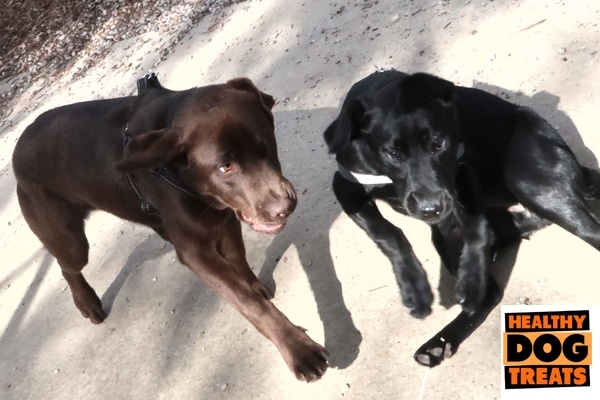 While wolves are often the alpha predator in their specific environments, they hunt in packs, and can go days between feast and famine episodes.  They rely massively on the pack and cooperation between individuals, and the reward is a hardy animal prey meal. They rip the animal to shreds, with different hierarchy of wolves getting different parts of the animals.

But that said, they are mostly in control of their own destiny. They don’t always know when or where their next meal is coming, and it can be a very hard life, but when on the hunt they have a measure of control, and the satisfaction of the kill, and the taste and action of eating the animal releases a mass of endorphins.

Flashforward 20,000 years to the domestic dog. Your dog.

Unless they regularly hunt for live animal food, or act as retrievers and enjoy the spoils of recently deceased animals, dogs mostly get a commercial dog food diet. Either dog can food, dog roll or kibble HANDED to them.

THIS is as far away from the thrill of the chase, and any sense of achievement that any hunting animal can get.

Regardless of the shape (breed) and age of your animal, their primal brain is geared towards the chase, and the reward of the kill.  It is keyed into their very survival.

But your pet dog rarely has a chance to hunt in a pack, it probably isn’t allowed to regularly kill other animals. We know this is actively discouraged in our neighbourhood anyway.

While your dog might not be a Labrador retriever or lab cross, or curly coated retriever it’s very reason for existence (in its primal brain), is still based on the hunt /capture /kill model .  BUT its mental conflicts (its cognitive dissonance) is that it relies on a human for ‘hand outs’, and is NOT allowed to capture its own food.

Not every dog implicitly shows this desire to catch and eat its own food, but some dogs are quite good at giving us good signals. My dog Archie for instance waits for me to leave his bowl … show that I had nothing to do with it magically being full, before he approaches it and enjoys his ‘kill’.

Many dogs just keep the primal urge buried deep in their head, and just eat as fast as they can, in case another dog spies it.

Some people fill treat balls with kibble, but that is ‘more of the same’. More wheat or even worse big brand concoctions aimed at ARTIFICIALLY making your dog eat more. Nothing like they are actually gear biologically to eating (MEAT).

If you don’t regularly hunt in packs with your dog, they will still enjoy the action of shredding the kill (meat jerky) – and this is exactly why jerkies, (full strips of meat, not MDM recombined pieces), are still the most existing most satisfying for any dog.

Big dogs can also handle chewing leg bones of animals, and smaller dog’s things like roo tail tips or roo lumbar, but whichever way it goes, a bio available food source (animal meat), given to the point of satiety is what they crave. If you can add in regular walks and playing with them they will truly be satisfied.

If you own a lab, all we can say (from the information in the reference paper) is good luck with distracting your lab and finding other rewards besides only food. If you own any dog, make sure with the limited KJ you can give them, and keep them fit, that a big part of it is meat based.

Blog
Previous reading
What is the ‘DOG Pleasure principle’ and the 3 things they NEED for TRUE fulfilment
Next reading
Did you know that Offal is needed in dog’s daily diet? Its all about the Natural nutrition it provides.