HEALTHY DOG TREATSBlogBlogTOP dog treats people are looking for in Australia, USA and UK in 2021

TOP dog treats people are looking for in Australia, USA and UK in 2021 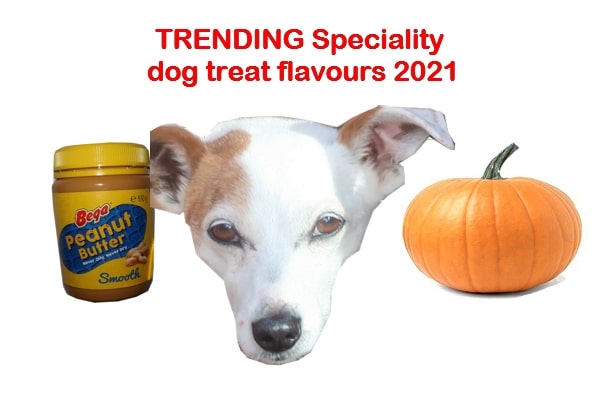 In the last blog we looked at globally and within the major dog treat interest countries if income had an impact on who buy dog treats, and it seems that it does somewhat.

In the article you are now reading, we look at what specific dog treats associated terms people searched for on Google over the last twelve months (march 2020 to march 2021) in each of those countries. And what those specific searches might mean regarding future dog treat trends.

The following table shows the top ten Highest Google searched dog treat associated terms in some of the top dog treat searched countries in the world.

The number to the right of the term expresses the relative amount of times these terms were searched in that county, with all term values being relative to the first term (always shown as 100%). 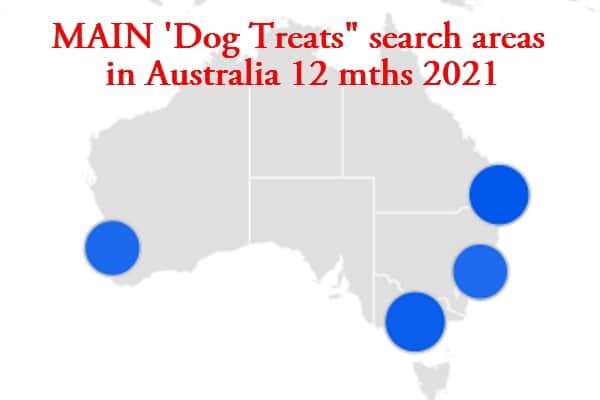 Australia only had enough searches over 12 months for Google to show the top 7 trend terms.

The first and the seventh highest dog treat types of terms were specific branded dog treat products, kudos to their marketing departments.

The Australian list shows that there is still a strong trend for “homemade” dog treats with THREE of the seven terms being of this variety. From my experience on searching for terms on Google, the main homemade treats that are offered up as recipes on google in Australia tend to be biscuit varieties full of grains – exactly the type of treat we are aiming to steer owners away from.

If your dog only gets 30% meat in its main dog food – because it’s a cheaper option for the manufacturer, not because it’s better for your dog, then ONLY MORE quality MEAT in their diet by adding quality meat treats is the best supplement to what they already eat.  Adding more low-quality proteins (for a carnivore base species) is not ideal.

We have also written articles about advice about making your own meat-based dog treats, in how poor economically this process is, since most people are buying meat at retail prices, doing small batches in their domestic oven, and all of the associated health risks if not dried properly.  It’s a step in the right direction compared to baking biscuits for a carnivore dog, but its also fraught with many pitfalls.

So the only non-DYI or branded search terms in the top 7 over the last year in Australia were “bulk dog treats” 64% And “healthy dog treats” 64%  interest.   At least ‘our treats’ are getting a ‘look in’ for the top searches! (if only in name sake)

Being the largest English-speaking high-income country on the globe and one that Australia follows for many trends, looking at what they specifically searched for in dog treats is kind of a big deal.

In Americas case, DYI “dog treats Homemade” was their top term over 12 months.  There was only one other DYI term “make dog treats” 55%

Where it gets interesting was the two FLAVOURS of dog treats that people were searching for that made it into the top 10. “peanut butter dog treats” 70% and “Pumpkin dog treats” 46%.

The most concerning thing about this is that these are VEGETABLE flavors. You will find that often in dog treat they don’t even use the actual natural product. But regardless these are NON-MEAT things to add to a dog’s diet.  Flavors that are often added to wheat to make a biscuit. Things that do not provide brilliant nutrition to a dog. Pumpkin can add good fibre but so can animal products. Its the extra sugar, the CARBS in veggies that dogs dont need. They can get a better use of energy from the Protein in meat, rather than via carbs.

There was only ONE meat dog treat mentioned “chicken dog treats” coming in at number 10 and 36%.  One of the most generic meats known to man, readily available in dog food, and more likely to cause an allergies in dogs than kangaroo or fish (but of course America doesn’t have kangaroo meat treats readily available). Chicken meat also tends to be relatively high in fat in natural state (10%) so not useful for obese dogs or dogs with pancreatitis.

There were NO OTHER SPECIFIC MEAT based dog treat terms in the TOP ten in America over the last 12 months. What a wasted opportunity for people to properly supplement their dog’s diet.  AFFCO has a ridiculously low protein requirement for dog food at 18% – this is why dog food makers can often get by with putting scrap meat into dog food, and only 20 – 30% meat or offal.  Unfortunately, people rarely read blogs with information like this so they go along their happy way feeding their dogs useless “fun foods” or treats full of low value vegetables rather than high quality meat.

The fourth and fifth most popular dog treats terms were:

Of course, the making money trend for CBD additives in treats continues unabated in America. Decriminalizing marijuana usage for humans in several key states over the last few years has normalized the usage of THC and CBD for humans, so they naturally think it’s a good idea to use it for their dogs.  The issues are complex and we have written CBD articles about this topic before.

In a snapshot, if your dog has a chronic pain issue or is epileptic or some other VET diagnosed disease or condition, then they should perhaps consider using CBD as a pain relief, PRESCRIBED by a vet.

We however sense that some owners are using CBD to drug their dogs out of separation anxiety, which if they walked or bonded with their dogs, they might not need in the first place. Secondly CBD or flax seed with virtually no CBD oil in dog treats is highly unregulated and often contains trace amounts of the substance doing very little good except for unscrupulous manufacturers making a quick quid. They might also include THC which can be dangerous for dogs in any quantity.

There of course is now a demand in Australia for CBD dog treats (because we love following American trends), regardless of them being unregulated manufactured, not prescribed by vets, and often having virtually no useful amount of CBD in them.

This is one trend that Australia should seriously consider NOT following, except when prescribed and regulated.

Refreshingly, the UK didn’t have a brand or DIY treats as its main search term, it had “dog treats UK” at 100%.

Also very reassuringly they had “natural dog treats” as their second highest term at 64% of the search volume of the highest term.  “healthy dog treats” came in at ninth at 21% but at least it was there.

The DYI treat searches were also prominent in the UK with:

but at least these were well down on the American high DYI rankings for homemade treats.

“peanut butter dog treats” came in at forth with 41% considerably lower than America’s 70% for the same term.

Noting that this survey of Google search term was taking during the COVID year, it is still curious that the seventh highest term in the UK was “pets at home” – not sure what the intention of that is but they suggest that it is “dog treats” related. They UK also lists that as FOURTH highest search term over the last three months (see table below) at 21%

We compare and contrast the 12-month list above, with the three-month list below. Again, the top term is set at 100% and all other terms given a numeric value relative to the leading searched term in the country.

We check short time periods now and then to see if there are any emerging trends, we should be aware of in dog treats.  For Australia Google says that there isn’t sufficient volume or concentrated interest in specific terms but to give one Branded dog treat up.

The USA table has a full ten terms with a very similar search field to their 12 month values. “homemade dog treats” were still their primary term and the first three terms were the same.  Fortunately, CBD treats only has one term in the top ten over the last three months dropping from 60% interest volume for the 12 month average, to only 33% over the last three months.

“healthy dog treats” has snuck into the American top 10 at number nine and 29% interest value.

‘Natural dog treat’ has risen from second on the 12 month average at 64% to TOP of the UK list over the last three months !

While google only offered up SEVEN terms in the UK for the last three months, FOUR of those were DYI dog treats. It looks like COVID might have bitten the home budget more than expected.

DYI treats (typically mostly vegetables and easy to make biscuits etc) were some of the highest search terms over the last twelve months and the most recent three months for Australia, America and UK.

‘Healthy dog treats’ searches featured highest in AUSTRALIA at 64% over the last 12 months, and even though it only make it into ninth position in UK with 21%  and only into Americas top ten in the last 3 months at 29% it was still present!

THE ONLY specific Meat based query for any country, three months or 12, was “Chicken dog treats” in America at 36% for their 12-month average. Whereas: “peanut butter dog treats” and “pumpkin dog treats” both appeared in the USA 12 month and 3 month lists and it was higher than chicken dog treats.

The ‘CBD treats’ trend continues in America scoring top ten for 12 months and 3 months, but has not rated as highly in Australia or UK yet. Perhaps citizens in both countries are more informed and concerned for their dog’s health?  We can only but hope. It could be great for true diagnosed medical conditions of dogs, but over-used and mis-use are very possible and dangerous outcomes (assuming there are more than trace amounts in the treats or food).

The masses don’t always search for what is good for them or their dogs. We were hoping that meat might feature more prominently in any countries list short or long term, but alas not to be. If you are on this site, you are probably aware of the large range of quality meat products in easy chewing to long chewing categories.

In assortments of nutrition or pre-occupier, even a ‘dental stix’ equivalent category, or perhaps you are after ‘dog training’ treats. Any which way, we have covered your functional reequipments with many unique categories to assist you with your purchase of the most natural AND nutritious dog treats on earth.