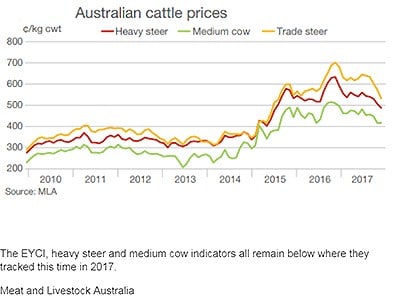 Australia has been in drought for a while now (Aug 2018), but that is only a tiny part of the reason for the escalating beef prices we have witnessed over the last five years.

The reason that beef exports should be important to any dog owner is two-fold.

1              There is a push to feed dogs real food (meat) and if legislation happens to clean up the pet food industry, more meat will be consumed by dogs, and that will put further pressure on beef prices.

2              Even if no more meat is put into commercial dog food, and no one else begins raw feeding (meat) to dogs, The price of meat based dog treats will continue to increase with the increase in exports.

Australia has long been considered a lucky country.  But after we have allowed the govt to ‘sell the farm’ overseas,  and rejoice at increased exports of our beef, it will not remain lucky for long.

The information below is from the MLA, the governing beef organisation that has the main goal of keeping beef (and other farm products) prices high for farmers. The problem is that there are a few little independent farms and ‘farmers’ left. So this article has very little to do with the image of the little battling farmer. With massive station consolidation and corporation buyouts, much of the export profits are going into corporations and their shareholders. In effect, the Australian people are the ones daily paying for those shareholders to become rich. And that profit should not be on a staple food (beef) that disproportionately affects the lower income people of Australia.

The MLA says it best when they say “There has been a great deal of conjecture about the factors that affect beef prices in Australia over recent years, to the extent that there is now a Parliamentary Committee inquiring into this question, and in particular the impact of consolidation in the meat processing sector on meat prices.”

The first graph in this report above shows that beef prices were relatively stable between 2010 and 2013 but have been increasing from 300c/ Kg in 2013 to 550 c/ Kg in 2017.  The ‘down turn’ at the end of the graph is expected to be short term unless the drought is protracted.  Normally short supply means an increase in prices but South American beef exports to America are taking up any short fall in Australian beef prices, suppressing exports to North America and limiting price increases from our traditional export majors. 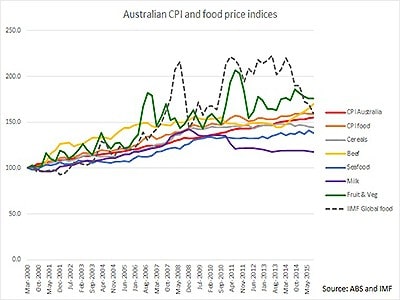 The beef price issue long term is the massive pent up demand for beef in China.  With Chinese owners of Australian cattle stations, and most large cattle stations increasing exports. The complete lack of a cohesive food security plan by the Australian government is putting small interest group profits well above ‘reasonable’ food prices for Australian people (and their dogs),

The graph below goes someway to compare beef prices with other food prices in Australia Versus the consumer price index (CPI). As you will see from about 2013 the CPI remained relatively flat, while Australian beef prices dramatically ramped up.  Yes ‘fruit and veg’ prices have been a lot more volatile, but also include many types of products making up that grouping (eg avocados). And this article is about the causes of the rise in beef prices and the affect of that on dog treats and dog food. 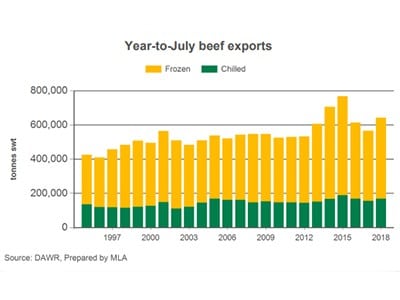 The TOTAL Australia beef export graph  shows that except for 2014 and 2015,

Australia global beef exports have been relatively stable at near 600,000 tonnes swt. But it hides the high and increasing demand for certain countries.

Of this total export amount, North America and Japan take up the lions share. North American exports have fluctuated wildly between 100,000 and 300,000 tonnes swt- due to Australia’s competition with other importers to that country and American protectionism measures.

Japan totals have ramped down since 2005 to only being 150,000 tonnes swt in 2017. So these are not necessarily high growth markets that will put future price pressures on domestic Australian beef prices.

The SE Asia graph (major two countries accounting for 90% of the exports are Indonesia 60% and Philippines 30%) show an increase in Australian been export consumption from 20,000 tonnes swt in  2008 to its current levels around 80,000.  This is a big increase, however these countries aren’t expected to have major GDP increases so their buying power isn’t likely to cause major increases in export opportunities (at least at high prices).

The biggest concern for Australian Beef domestic prices is China exports.  The Chinese exports accounted for only 20,000 tonnes swt from 1995 to 2012  but in 2013 they ramped up to 100,000 tonnes for the next five years. In one year they almost became our second largest export destination of beef.  They might be capped at the moment by current export contracts to other countries, but there is no doubt that demand will soon outstrip supply putting major pressure on Australian domestic beef prices (human and dog food)

China has had one of the largest GDP growths of any large country for the last ten years. Their economy is based on exporting finished goods globally, and as their country’s wealth increases so does the wages of their billion plus people. And unlike Japan and Americas populations, China’s population is still growing much faster in terms of absolute numbers.  With few restrictions on property ownership in Australia, and several cattle stations and abattoirs already in the hands of Chinese ownership, it is likely that Chinese beef exports will continue to ramp up and outstrip America and Japan combined.

The MLA squarely puts previous price rise issues on the competitiveness of Australian beef with the American herds and other beef imports into America. However from these few graphs it is easy to see how SE Asia and China exports are likely to outstrip our major beef trading partners in the next few years.

Even without droughts, Australia has a very limited amount of arable land to support large cattle herds. Large herds, with hard hooves, can cause substantial damage to the environment (erosion). With Australia’s population recently reaching 25 million and no clear population growth strategy for sustainability, and the increase in appetite of our large population nearby Asian neighbours it is clear that in times of good weather, that more of our beef will be exported overseas driving up beef prices in Australia.

That will mean an increase in beef human and dog food/ dog treat prices in Australia. International beef supply will increase as demand increases but is unlikely to meet demand with the high economic growth of China and other SE Asian large population countries.

Given this information, I am still amazed how low we have managed to keep our beef jerky and other dog treat prices over the last five years. And when you compare 100% beef jerky to mechanically deboned meat (MDM) and other mystery meats included in some dog food pellets it is easy to understand how the premium dog treats will soon be forced to only be affordable for the rich ..  shame Australian politicians, shame.

Blog
Comments for this post are closed.
Previous reading
Frozen Dog Treats for summer, use all meat not vegetable to reduce obesity
Next reading
Low fat dog treats, pancreatitis and what to feed your dog, to keep them healthy