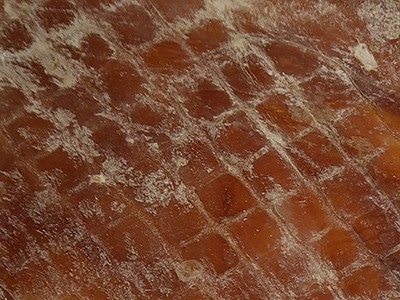 Octopus dog treats are 100% safe for all dogs to eat.

NO MEAT appears on any list by reputable companies as being bad for dogs.  The only toxic organic (animals or plant) materials for dogs are from the Plant kingdom. Many people suggest that overloading dogs with unnatural food like grains puts an excessive load in their bodies, but billion dollar dog food companies disagree.

Octopus jerky is also obviously ORGANIC and natural for a dog to eat – ours are just 100% octopus dried.  NO ADDITIVES OF ANY KIND.

The nutrition data site puts all of these sea animals together “Mollusks, octopus, common, cooked, moist heat Nutrition Facts & Calories”  It has very low fat (below 4% and less than 1% being saturated. Omega 3 is high as is the protein 50%.

The great thing about our Octopus jerky dog treat is that it is in pliable thin sheets that makes it ideal for cutting into any size strip or shape you want.

Most dogs love it, and it is easy for any dog to eat. It is much softer than beef or Roo jerky and is a great way of getting quality protein into your dog, especially those feed regular commercial dog food diets.

Why would people think that any kind of meat could be dangerous for dogs?

Because some companies that sell high grain dog treats want you to fear the natural food of dogs. They say that raw meat and bones must be avoided.  Raw dog food feeders almost only feed raw meat and bones (plus offal) to their dogs.  When in the right proportion, these dogs are healthier than any dogs on commercial ‘dog food diets’.

The number one rule to remember for dogs.  MEAT IS GOOD.  Vegetables take up space (energy via carbs) that could be allocated to meat (for protein and essential amino acids that dogs can better digest).

How the myth about seafood being bad for dogs got traction.

I had to search for this because I have never heard of it before. Is organic lean meat being bad for dogs?  Sounds like another rumour by dog food companies?

Turns out that sites are trying to inform people that all seas are so polluted by ”  toxic metals, industrial chemicals, and pesticides.”  that you should only occasionally feed dogs fish.

Ironically it is more likely that these toxins are most likely to start off on land and find their way into grain crops, and farmed animals. This is more likely than organic seafood which should be on the top of your list of clean meats for your dog.  The next scare misinformation that these sites spread is news on  “deadly preservative ethoxyquin, as well as mycotoxins.”

It is true that very old very big sea animals in certain polluted areas (mostly away from Australia) could accumulate heavy metals, and that is why authorities tell humans to limit the amount of swordfish or tuna they eat.  But this is OCTOPUS, small and relatively young, near relatively clean Australian waters.  Again, none of these warnings apply to Australian Octopus

The high Carb issue, NOT the high protein issue.

Active dogs, young dogs, old dogs, pregnant dogs, that continually grow fur ALL need high levels of protein in their diet, just like their evolutionary source the grey wolf had. However because the affco nutrition table guidelines are slanted to allow maximum grain use, they have a very low protein minimum standard. And so the essential amino acids levels are very low.

But without naming the source required in dog food, when companies use Grain as the major food in dog food (because it is cheap), dogs cant readily access the essential amino acids from grains. This is why dogs need clean meats such as octopus as a supplemental source of bio-available proteins.

Because Octopus is very rare in dog food, it like roo meat and squid jerky we sell is hypoallergenic – and presents a very low allergy risk.

More misinformation ” Protein is a calorie dense nutrient and many of the high protein diets are extremely high in calories and can quickly lead to weight gain.”   Gram for gram protein has about the same energy level as carbohydrates.

The only reason that almost every article out there slams meat is that they sell advertising space to dog food companies, not butchers or farmers.

The main reason to have a low protein diet.

This is vet prescribed often when a dog has: “kidney disease, liver disease, and some kinds of bladder stones. The low-protein diet is used to reduce the workload of these organs. … however Many vets are coming around to thinking that restricting phosphorus is a better method than restricting protein, which could cause the dog to lose muscle mass, among other health issues.” (petmd)

So if you have a dog diagnosed with kidney or liver issues, and a vet has directed you to only have a low protein diet, then yes, meat may not be for your dog.

These are the typical statistics for DRIED OCTOPUS (100g)

NOTE that this is for SEMI Moist octopus that still has 51g of WATER in it.  Our product is so dry that water content would be under 5% so you can pretty much double the values shown below.

Blog
Comments for this post are closed.
Previous reading
Dog food evolution, once upon a time – the history
Next reading
Organic Dog Treats Australia – Get what you need and pay for !