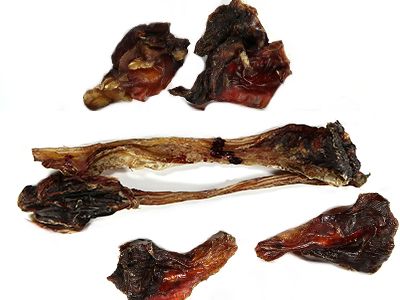 Its hard to play favorite with your children, and I get the same inclination with Kangaroo dog treats.

If you look at the photo in this article, you will see that side by side, Kangaroo tendons, and Kangaroo cartilage has a lot of physical similarities.

And of course they share the benefits that most kangaroo dog treats have:

Roo Tendons V  Roo Cartilage  – what is the difference?

Mostly it’s anecdotal of what I have found and other Healthy dog treat lovers have told me. Its all in the chewing.  Both Kangaroo tendons and Roo cartilage have a big bulb of meat on them. They have NO bones so anyone concerned about splintering or choking should be majorly relieved. Even though there are dogs around that eat everything too fast and are always at risk.

What I have mostly been told is that people seem to enjoy the roo tendons because it has the best of both world’s (well every treat world really) but mostly its the combination of meat bulb and longer stringy stalk. Most dogs will firstly attack the bulb with glee then get down to eating the longer part like a bone. But unlike a bone, it’s very unlikely to damage their teeth and in fact cleans teeth and strengthens gums. While many smaller dogs often give up on bones, very few leave this alone forever because of its sumptuous roo meat concentrated smell.

So why roo cartilage at all?  Well, while the roo cartilage just looks like the roo tendon bulb, it is often slightly harder to eat than the roo bulb which can fracture easily into quickly digestible pieces. And while the roo tendon takes almost every dog slightly longer to eat, not everyone wants that. PLUS on the roo tendon, only half of it is meat based – the stalk (tendon) provides great chewing but isn’t such a high amount of meat protein, meaning that it has slightly less nutrition, but also less calories.

Kangaroo cartilage dog treats are an easier option to be eaten by all dogs, and there rarely is any leftover. But given to a big dog, they can often try a quick chew and gulp before they have fully softened the dog treat. Though the risk is reduced, because it is flattened (not spherical), and not bone. That means roo cartilage is very unlikely to get stuck in a dog throat, and even if only slightly chewed, it will dissolve in their stomach (because it is a natural animal product), but it is likely to be eaten slightly faster by any dog.

Sometimes when the budget is critical people just opt for the slightly more affordable option which with our current supplier tends to be the Roo cartilage.  Either way, both dog treats provide amazing nutrition and chewing value, are 100% organic and are very unlikely to cause any dog, a dog allergy reaction.

The truth is, that I give both of these treats regularly to my dog. With a slightly different shape and composition, it means he will never get bored with one of the healthiest treats I can give him

We can’t blanket approve this treat for all dogs, because every dog has a preference for treats, eating style and food intolerance possibility. But as far as we know, these two kangaroo dog treats are two of the best dog treats ever.

Blog
Comments for this post are closed.
Previous reading
Kangaroo jerky dog treats – Why the experience is as good as its healthiness.
Next reading
Can dogs eat beef jerky with cheap price compared to human treats?