HEALTHY DOG TREATSBlogBlogHow to tell how much meat is in your treat.

How to tell how much meat is in your treat. 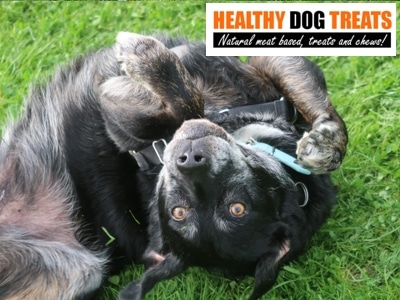 You might think that working out the total amount of meat in any dog treat should be simple. Surely it will be listed as a percentage of quality dried meat on the ingredients list !

You might also be very surprised to find that both DOG FOOD and DOG TREATS, globally, and in Australia tend NOT to have any rules requiring disclosure of the amount of ANY ingredient in any dog food or dog treat.

We have written many articles analysing dog food and finding that meat typically is between 30-40% at best in any major dog food kibble, and as low as 20% in some. In fact the trend in VEGAN dog food means ZERO percent meat.

Meat is what dogs evolved to eat. It is utilized best by their digestion processes and is highly bio avail able to them. That means it is NOT wasted.  Besides dogs LOVING the taste of most meats, it is their healthiest choice.

In fact they say “Inspired by the homestyle recipes, The new Dog Treats ..  are proof that tasty doesn’t have to be complicated.“

And that is fine, as long as you get what you paid for, or what we think that people think they have bought is actually in the pack.

You see, we (healthy dog treats) sell mostly 100% animal products. Our meat jerkies are 100% meat, dried. They are single ingredient, without any additives, without and misrepresentation. Not open to interpretation, not open to owner confusion, you get what you paid for, QUALITY MEAT products for your dog, to supplement the low meat content in most commercial dog food.

So we thought we would look at the PROTEIN content of the TOP three listed NEW TV show inspired dog treats and what that most likely means for actual meat content.

If you are not aware of it, there is a thing used widely in the industry called INGREDIENT splitting to confuse owners as to the likely content of a dog food or dog treat.

Yes the first ingredient listed on a dog treat pack, is the highest percentage ingredient in the pack. And assuming it is the DRY weight of that ingredient you might think that it makes up the majority of the pack.

However, if a dog treat has FOUR major ingredients in it, they could all be around 25% content each, with the first ingredient just slightly greater than EACH of the next three.

The easiest way of checking the likely meat contented is based on the fact that most meats have around 40-60% protein (dry matter content), while most grains are typically around 10% protein (and often NOT bio available to your dog).

This means that if the protein in the dog treat pack is MUCH less than 50%, you can be pretty assured that the meat content is also MUCH less than half. 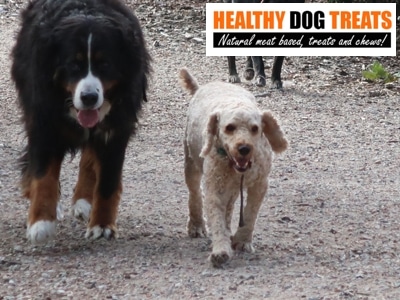 How much Meat does your dog treat have?

Consider a product that has the top ingredients as:

This means that the treat is effectively dried (not diluted by water) and that the total Protein for the mix is a miniscule 8%.

To have a Crude protein percentage of only 8% suggests that even though Bacon is shown as the first ingredient on the list, and the highest percentage, that percentage must be very small.

Now most of our treats have a water content of around 10%, to prevent spoilage, and so that you get MORE MEAT for your dollar.  When you buy a treat that has one quarter of it as water, the amount of non-water product can only be three quarters of the pack !

Dried Chicken (broiler) on nutritiondata site, has protein of 28% when water is 59%.  If we reduce that water content to 25% (for direct comparison with the treat water content) the protein value in 100% dried chicken rises to about 38%.

So if Beef and Chicken were the only ingredients in this treat the protein value would be about 38% (and 25% water).

The curious ingredient in this treat is the third ingredient: SOY GRITS.  The Ncbi site says “Soy protein products are mainly used as ingredients in formulated foods and seldom are seen by the public. They consist of four broad categories. (1) Most soy proteins are derived from “white flakes,” made by dehulling, flaking and defatting soybeans by hexane extraction. These may then be milled into defatted flours or grits containing approximately 50-54% protein.”

Mercola and dogsnaturallymagazine both say that dogs should NOT be fed soy in any large amounts. See Appendix.

Even ignoring that information. Consider that WATER is listed in this treat example, as the FIFTH ingredient in this list  AND YET it also says that the treat can have up to 25% water content !

This would assume that “soy grits”, listed as the THIRD highest percentage ingredient, is higher than 25% (the water content), or even if it has some water content in itself, the grits probably accounts for close to 20% of the ingredients.

So the first and second ingredients of beef and chicken are likely to be lower than 30-40% content combined.  At best, this dog treat has no more meat in it than commercial dog food. 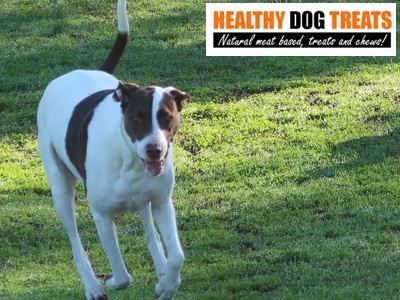 Even if you believe your dog is getting plenty of meat in its dog food kibble (typically around 30% dry weight),  the fact that the new dog treat TITLE includes the meat ingredients first, and they are mentioned again as the First thing in the description.  And they even say that the treat includes “natural ingredients, including real beef as the #1 ingredient “  …

You might think that they are getting PLENTY of meat for their buck.

Ingredient splitting, ensures that the total meat ingredient percentage is closer to 30% (the value of typical dog food, or less, in any of these NEW competitor treats).

If you accept this, and understand that bio availability means that your dog might not be getting enough protein that it can use,  you might also understand how a 100% meat dog treat (that has around 10% water content, not 25%) is  A much better value for you and your dog.

Even if you don’t accept that meat is important to your dog, please understand that meat is typically much more expensive that the other non-meat ingredients. So you are paying a premium price, just for their brand name in other treat brands, and not getting the meat you should expect for such a price should be …  disappointing in the least.

Why Soy Shouldn’t Be In Pet Foods

“High levels of the pesticide RoundUp have been found in GMO soy used in foods in the United States”, according to researchers in Norway. (Elsevier publication, June 2014)

“The UK is one of the few countries that conducts a yearly evaluation of food allergies. In March 1999, researchers at the York Laboratory were alarmed to discover that reactions to soy had skyrocketed by 50 per cent over the previous year. Genetically modified soy had recently entered the UK from US imports and the soy used in the study was largely GMO. John Graham, spokesman for the York laboratory, said, “We believe this raises serious new questions about the safety of GM foods’.” (Institute for Responsible Technology)

“A 2004 study analyzing 24 commercial dog foods containing soy found that these products contained concentrations of phytoestrogens in large enough quantities to have a biological effect on our pets”. (PubMed)

Blog
Comments for this post are closed.
Previous reading
The top 4 global dog treat trends for your dog in 2020
Next reading
List of top 5 low calorie dog treats Tricks to sell you treats that are no healthier than dog food.