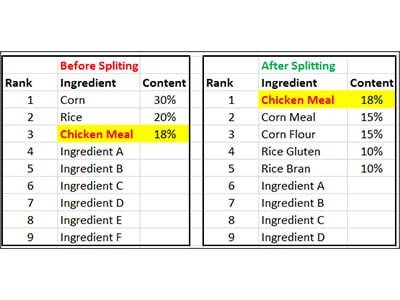 OK, let’s assume that you are not a raw feeder, or if you are a raw feeder you use lots of carbs for your dog.  These are personal choices.

However since dogs are still documented as carnivores by many scientific dog journals (not the ones quoted by dog food companies) you should know that the primary ingredient your dog should always get is MEAT. For the meat protein and meat associated fats.

SPLITTING in dog food has been the wide spread industry trick of making consumers think that they are feeding their dogs a lot of meat in their dog food, but the dog food maker putting very little meat in it. HOW CAN HIS BE TRUE?

The mathematics of Ingredient Splitting & why it is bad for your dog.

Manufacturers have cleverly found that spitting the primary ingredient such as Corn (30%) into Cornmeal (15%) and Corn Flour (15%) can magically make the corn ingredient go from primary ingredient to ingredients 2 and 3. And meat APPEARS to be the most plentiful (even if it is only 18%) of the total can !!

While the dog food industry has been profiting for years off vets they pay to tell you that their dog food is good, they also make you believe that MEAT is the primary ingredient often without saying it specifically.

What else do you need to know about SPLITTING INGREDIENTS on the list?

You should also understand that even if MEAT is ingredient #1,  the might mean raw meat or meat with water in it – so the actual meat (dried) is 25% of the stated value and falls way down the list. Dried meat is called ‘Meat Meal’

Meat might also be called Meat Meal (which in theory is the dried version giving you the correct weight, BUT they may include ‘meat by-products’ which is every other part of the animal that humans are not supposed to eat (like beaks and feet), or poor quality offal etc. Just to pump the seemingly meat components higher.

Why ARE PERCENTAGES NEVER SHOWN ON DOG FOOD LABELS.

1 Because there is no labelling law requiring it. A clever loophole.

2 A lack of actual percentages can fool you into thinking that meat is the primary ingredient and have your wishful thinking, think that its a lot.

3 Soy is made to look like meat, so you are convinced further that there must be a lot of meat in the can. (TVP’s look them up).

People inherently know that dogs eat meat, and should mostly eat meat, but more and more people are feeding their dogs at home with a little meat and a plate full of rice or veggies – THE SAME percentage as in dog food. There is little difference in the nutrition available to the dog.

It’s not the grains that are a problem, it is the carbs taking the place of meat proteins that the dog easily uses for nutrition. Poor digestion of carbs means that dogs are not getting full nutrients.

Because either manufactured dog food or home cooked dog food is usually very low in meat, dogs are missing out on vital meat based amino acids.

The way for your correct this is to feed extra raw meat to your dog (so cooking doesn’t damage the proteins) or feed your dog meat based dog treats that have been slow dried such as our Jerky range (100% meat).

People are so busy they often don’t feel like cooking for themselves, let alone preparing dog food that is truly nutritious and high in meat for their dog. If so substituting MEAT based dog treats (up to 50% of dog food) can rectify this little industry secret, such as splitting helps cover up, then your dog can balance up the meat short fall.

Blog
Comments for this post are closed.
Previous reading
Why most people prefer our beef pizzle / bully sticks?
Next reading
If you buy dog food, you need to buy healthy dog treats