HEALTHY DOG TREATSBlogBlogWhy is “Jerky Treats for dogs” the #1 search term on Google?

Why is “Jerky Treats for dogs” the #1 search term on Google? 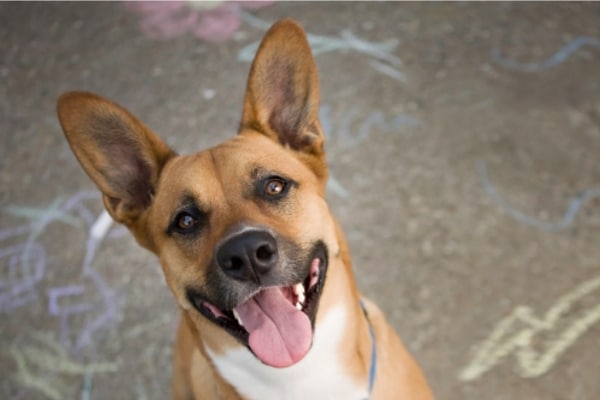 Over the last 18 months, “Jerky treats for dogs” has become one of the highest global ‘dog treat’ search queries on Google.  Why is there so much interest in jerky?

Simply put, jerky is a brilliant treat but even more than that… it is a great food for dogs.

Meat jerky is meat that is just dried.  Except for poultry where a tiny amount of soy is added for flavour and keeping the jerky together, meat jerky tends to be 100% meat. It is simply cut into strips and dried. It can come in many varieties including:

Dogs’ carnivore-based digestive system and ancestral hunting methods means that the majority of their food should be animal-based (not plant) and jerky fits this brief nicely.

The move towards plant-based diets

Plants are excellent for humans (true omnivores) to eat.  And most of us are told that some of us can eat too much meat and ‘should’ move towards a more plant-based diet.  However, dogs are VERY different.  They are mainly carnivores, and meat is the preferred and healthiest natural food for your dog.

Unlike humans (who can reacted to having an overload of meat in one meal), no natural meat products that we sell are dangerous for dogs. They digest it very quickly, and meat is HIGHLY bio-available to them (easily used by their body, as opposed to most vegetable stock).  Only very rarely do dogs have a gene that makes large protein intakes difficult for them, the majority of dogs do very well on meat.

Hence why dog food packaging that really wants to make a sale tells the percentage of meat in dog food (though because this is typically below 40% meat, most companies just list it as the first ingredient with a big picture on the dog food bag or tin).

The only toxic organic materials for dogs are from the plant kingdom.  In fact, many experts suggest that overloading dogs with unnatural food like grains puts an excessive load on their bodies. Hence why there is also the trend for ‘grain free’ dog food.

Due to the relatively low cost of grains, many commercial dog food companies sell high grain dog food and dog treats and advocate that raw meat and bones should be avoided.   This is purely a profit maximising exercise, as meat is a far more expensive ingredient than plant products or grains.

Meanwhile most dog nutrition experts (not paid by dog food companies) suggest that owners should feed more raw meat and bones (while supervised), plus offal, to their dogs. This is because when done in the right proportion, a natural animal-based food (and treats) produces much healthier dogs than those exclusively on commercial ‘dog food diets.

Taking it back to basics, the number one rule is that MEAT IS GOOD FOR DOGS.  Vegetables take up space (energy via carbs) that could be allocated to meat (for protein and essential amino acids that dogs can better digest).

Which jerky is the best for my dog?

Jerkies are a great nutrition boost for all sized dogs and can be a fantastic (time occupier) treat for small to medium dogs.  Meaning they’re having fun whilst eating.

Jerky is mostly a single cut of meat that has been dried and your dog will have to tear and rip the meat apart, as their teeth were evolved to do. The act of tearing and ripping provides a sense of accomplishment at putting some effort into eating their food, rather than the ‘dumbed down’, easy-to-fall-apart pellets that make up most dried dog food.  Those vegetable based, and high additive foods tend to leave deposits on teeth and cause decay.

If your dog is prone to ear infections, then choosing a single ingredient fish or kangaroo jerky variety is a great way to boost your arsenal against ear infections because they are higher in Omega 3 than other jerkies. 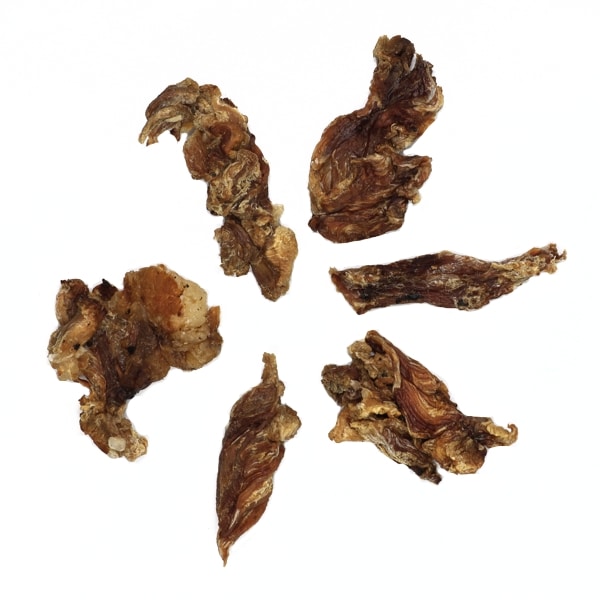 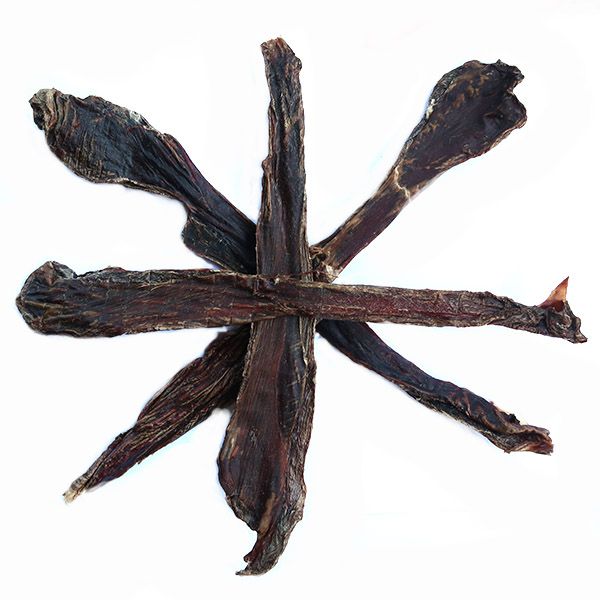 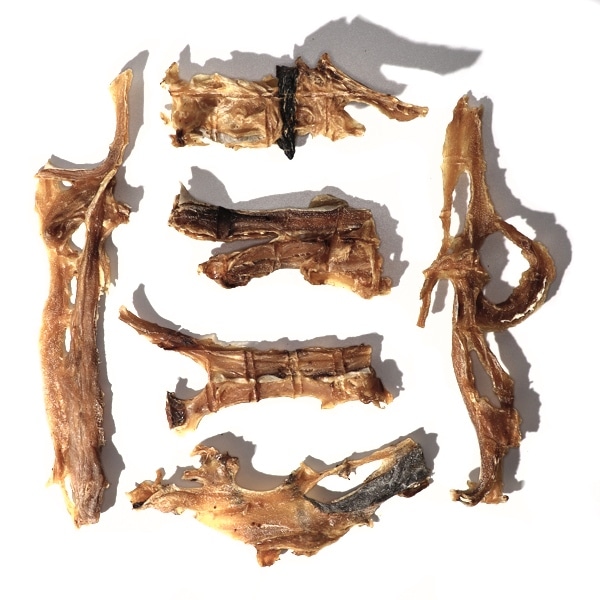 So, who is searching “Jerky Treats for dogs” on Google?

Not surprisingly it is people in the traditional “dog-mad” countries.

The relative interest in Google search for “jerky treats for dogs” by countries (2020-21) is shown below : 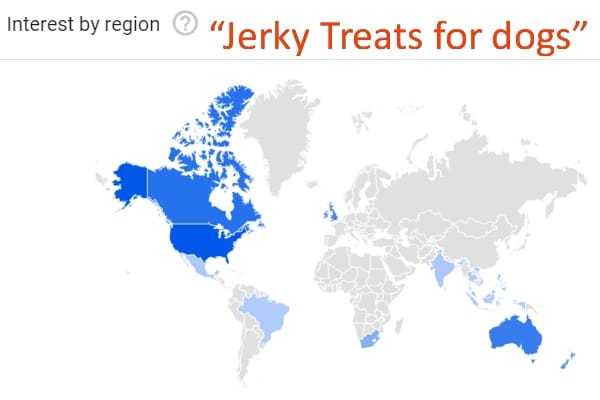 If you are new to natural or healthy meat-based dog treats the simplest way into this healthy world is to buy a few smaller sample packs of NEW meats your dog hasn’t eaten. See what they like, and what they enjoy best.

Just feed the quality protein to them slowly over several days until their system is used to processing this most natural food for them. Note this is EXACTLY the same method recommended by every decent food manufacturer when you are changing commercial dog food too. But in this case your dog is getting used to appropriate meat not strange additives and vegetables. Once your dog has adjusted to the higher levels of amino acids in meat based dog treats, they will usually greatly boost body maintenance functions.

To understand how much meat your dog has been missing, consider why feeding them actual dried beef jerky might give them loose stools at all It is only because they have had so little in their regular ‘beef based’ commercial dog food. If their stools solidify soon after eating 100% beef for the first time, it will show you how much they have been missing real meat, in decent amounts, in their lives.

Blog
Previous reading
Why Do Dogs Eat Grass?
Next reading
Can I give my dog a “Naughty” Easter Treat?