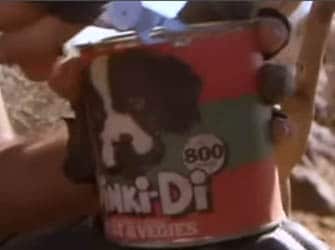 There are several reason why the latest Mad Max film – Fury Road is of interest to me. Its been a long time since Miller made the last one, and CGI has improved incredibly over the intervening years.  And of course it was filmed in Broken Hill, my birthplace ..

Wiki says that “Dog” (Max’s dog in Mad Max 2) was  killed by a crossbow dart from one ofLord Humongous’ Marauders. Dog was a two year old cattle dog ( blue heeler). Rather than de-sex the pound dog, a compromise was struck to give it a vasectomy (which apparently would not be as visibly anachronistic for the time of the film (de-sexing would not be available at that time).

However this article is all about one of the scenes that really stuck in my mind (being Australia’s preferred dog treat seller) –  where Mad Max was on top of the pinnacles (hill) and he uses a can of ” Dinki-Di ” dog food (meat & veggies) to feed his dog.

I get that Miller would have been fairly pedantic on the point that the post-apocalyptic time was meant to not be that far away from regular society times so that the dog food could have been manufactured and still in date enough not to poison the dog. I also get that Max was fairly preoccupied with the good and bad guys and not in a regular job, so his own eating became sporadic.

BUT I still question how he managed to stumble across a stash of fairly bulky “dog food” in cans and that he didn’t have cans of food for himself, Or that he didn’t catch and kill and cook his own food more, and give the meat to his dog.

It always seemed to be very corny and out of place scene the whole focusing the camera image close up on this fictitious brand of dog food. Since the film was released, several people have tried to use this fake dog food brand for advertising and even a facebook page was created around it.

So the most curious thing for Mad Max 2 and Mad Max Fury Road, is doing any of the dogs actually get to eat meat?  Surely in a post apocalyptic world, it would be much easier to get a meat meal or meat based treat for their dogs than find old manufactured dog food cans full of wheat?

Wheat doesn’t grow very well wild in Australia, but rabbits, foxes, goats, camels and a whole array of animals live fairly well in the outback of Australia.  Wheat, rice and soy by the way are the main ingredients in most current dog food sold in Australia. And they the carbs they supply are typically pointless or have negative long term health impacts on dogs (don’t tell the owners).

All of these prey animals in outback Australia, and vermin can be caught, dried and turned into jerky with the added bonus that many of them have very healthy low fat levels. In modern society, it seems that our food production is mostly tied up in a monopoly. Whether we are talking about regular manufactured meat foods such as beef and chicken, or wild animals such as Kangaroo, there are only a few sources you can buy the raw product from, which inflates the price. Then you need pretty good facilities and licences to process the meat and sell it. It only makes sense to keep people safe from severe food poisoning. This is why meat is so rare in current dog food and why homemade dog treats rarely have much meat in them.

But in a wild post apocalyptic society, it only makes sense that most of the characters meals, and the dogs meals would be meat based (high protein for energy and body maintenance functions).  It may actually turn out that in a time setting such as Mad Max fury road, a few decades on from Mad Max 2, that people get to eat more healthily (less processed foods) and dogs get to eat more healthy on meat based raw foods.

Likewise anything the dog couldn’t eat immediately could be turned into dried meat jerkies for protagonist and dogs alike. What a healthy dog treat post apocalyptic world that would be !

Blog
Comments for this post are closed.
Previous reading
Something funny going on when owners can’t tell good pet treats
Next reading
Where to buy wholesale dog food?