The highest demand dog treat states and cities for 2017 in Australia are .. 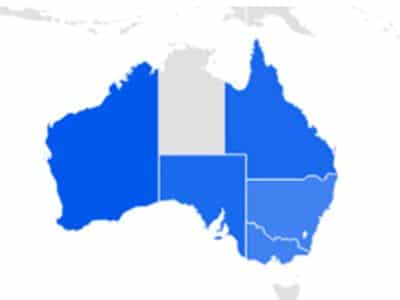 Welcome to the murky state of dog treat interest on Google Australia.  Having around 80-90% market share of searches in Australia, Google is a good barometer of the interest in any particular industry.

In the case of my interest “dog treats”  the attached map gives you a good graphical representation of how concentrated (by state) the interest in dog treats are (number of searchers per state population) between sep 2016 and Sep 2017.

We will look at the numbers behind that below,

.. but of particular interest is the difference in state interest and Metro area interest in Australia..

If you were wondering what the whole of Australia interest over the last year looked like, then that is shown in the graphic below:

The lowest interest week in dog treats was 12-18 March 2017 with a whole bunch of Monday holidays landing on the 13 March.

Apart from that you will see relatively regular fluctuations of about 25% in volumes for this core term from month to month.

Now this table might make sense to some people taken alone, however when Metro interest in dog treats is considered the picture is a little more complicated. 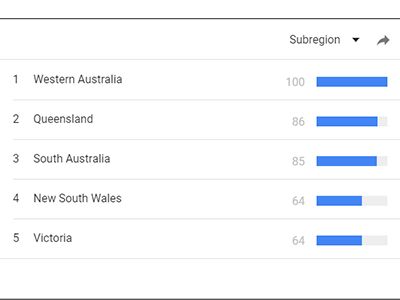 However Google drills down to show that by CITY  Sydney was the greatest “dog treat” interest in searches over the last year (100) compared to Melbourne 95%  (and the other cities interest was too low for Google to display).

Taken together this infers a lot more information.  WA overall has 56% more interest per person than Victorians, but Melbourne City has the second highest rate of interest per city in Australia.  As Victoria came fifth highest state interest, it means that Melbourne is massively over represented by its interest in dog treats and/ or regionally very unrepresented in interest in dog treats.

To be fair Melbourne does comprise the lion’s share of population of the state.

Of course the issue with such ‘relative data’ is that it is a little harder to quantify into real numbers and there is so much guess work as to where regional interest in dog treats might lie.

If you were a marketer you might put all of your efforts into Sydney and Melbourne cities. But being the two largest cities in Australia, even with the higher density of interest, you would be competing with more online companies for these prime markets, and a lot more physical stores.

If you were interested in targeting WA, that might make sense, but the reason that the state rates highset in interest is probably because Perth is a relatively smaller proportion of the total states population compared to NSW and VIC. So targetting in specific smaller regional WA town is problematic.

We have had a look at the interest in dog treats over time (a few years in a row), and the good news is that there is a slight upward trend in interest in dog treats.  The main issue of course for the buyer is knowing that Healthy Treats are meat based treats, and in finding our company among the maize of pretenders …

Previous reading
Divine tempters dog treats are the best treats according to review.com article 2017
Next reading
Hot Trends in the DOG Industry that should NOT be real, 2017