HEALTHY DOG TREATSBlogBlogHealthy dog treats in America 2017, Why Fort Lauderdale searches the most …

Healthy dog treats in America 2017, Why Fort Lauderdale searches the most … 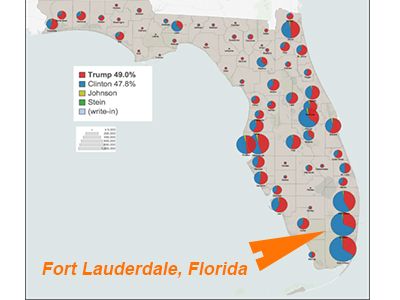 The image at the start of this article is of Fort Lauderdale, Florida. Over the last year (up to June 2017) Google trends has pinpointed this American County to have had the most searches for “Healthy Dog Treats” out of everywhere else in America per person.

HINT – “ five of the seven metro regions that searched most for HEALTHY DOG TREATS in America were in democratic presidential counties and two were trump.  Of the two counties that were Trump, they were in the Democratic States.”

Overwhelmingly interest in Healthy Dog treats seems to be a Democratic thing.

This has strong implications of the type of person who buys healthy dog treats, and who that might be in Australia in 2017 !

The incredible thing in the table below is that the same SEVEN TOP metro regions for searching healthy dog treats over a seven year average are the SAME metro regions for the last year (up to June 2017) – only the ORDER has changed.  The percentage next to the name is a comparison of the search interest per person compared to the highest search region (100%).

However, I wasn’t convinced that comparing Metro regions for healthy dog treats and state political affiliations was enough evidence of a link. The last article compared healthy dog treat searches (averaged between 2010 – 2017) with 2014  US presidential election results at the state level.

In this article I thought as I was narrowing down the electoral regions, that I would narrow down the Google search dates too.

When we compare the MAJOR METRO regions within USA 2016-2017 for Healthy Dog treats Google searches in America, with the 2016 America COUNTY results, five of the seven metro regions are Democrat (Hilary) and Two are trump.

Of the metro regions that are DEMOCRAT, they are regions of large population  (over 100,000 people) and are overwhelmingly democrat voting.

The two County’s that were not democrat were: 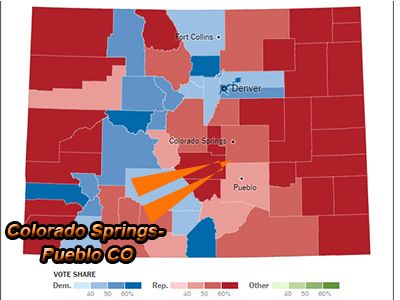 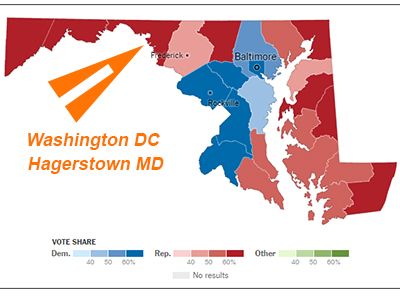 The curious thing is that both these two REPUBLICAN counties (that were a strong healthy dog treat searchers) were that they were in strongly DEMOCRAT states (around 60%).

Colorado Springs and Pueblo CO are only slightly south of DENVER the state capital that is strongly Democrat.

Washington DC Hagerstown MD is one county NW of the Democratic stronghold of Montgomery county. The county in-between Hagertown county and Montogomery is Frederick County which was very close to a tie.

It is obvious that different campaigns would have been run in different states and even at county levels.

Each political party will try and push a message that will get them in office, highlight specific parts of their policy that they think that the county people will most respond to.

The one obvious difference that the Colorado county has to all the other major healthy dog treat search metor areas  (except Michigan which is near the lake) is that it is very landlocked and parts of that state are near mountain ranges that keep temperatures depressed. This might mean that the metro region as a while is not as concerned about climate change and rising sea levels as the Democrat party were or the metro regions sitting next to the open sea were.

Voting is a complex business so the fact that NO Healthy dog treat leading metro search area was in a Republican county AND republican state makes a strong statement.

1    The top Metro regions for Google searches in America for Healthy Dog Treats top seven METRO areas remained the same between the average of 2010 and 2017  and the average of July 2016 to June 2017.  ONLY THE ORDER CHANGED.

This shows amazing strongholds of ‘Healthy dog treat’ interest in these areas.

2              An attempt to compare Google Metro regions with Electoral County areas was made.  Using as close an approximation as possible it was found that five of the seven metro regions were democratic presidential counties and two were trump.  Of the two counties that were trump, they were in Democratic States.

Both these counties were BOTH only ONE county away from Democratic strongholds in their states.

As we are dealing with complex human initiatives, and those people voted on a myriad of local /state/ country wide issues, it is too simplistic to say that there is a hard and fast rule that only the dog owners who most searched for healthy dog treats in America were all Democrats.

But the above tables suggest that there is a strong likelihood that areas within America that search for healthy dog treats are in Democratic regions, and based on Democrat principles.

Traditionally, Republicans are conservative and ‘old guard’,  believing in status quo and not early to jump on new trends.  Democratic voters are believed to be people who are more likely to be progressive and accept change, based on science and new information.  If healthy dog treats are seen as a new trend, it makes sense that it does ‘line up’ with Democratic thinking.

The curious thing of course is that as dogs evolved from wolves who are 95%  carnivores, and when owners mostly had dogs as working companions they would have allowed them to do their job and have a fair meal of meat (never over processed grains with a token amount of meat).  It is curious that this data suggests that on the whole, conservatives still don’t believe that feeding meat to dogs is one of the original or old ways that should be upheld.  That’s a big win to billion dollar dog food companies that feed dog grains and vegetables rather than more expensive (and appropriate) meat.

Perhaps this is the pervasiveness of long term mass media advertising that has convinced the average American that their dog should be eating grain instead of meat?

Perhaps it is because most treats are grain based, that people don’t trust that healthy dog treats would be anything different?

Or is it that concept of ‘healthy’ dog treats seems too new age, too radical for people who will do anything for their dog, but feed them meat based treats?

Generally at our company “healthy dog treat” likes to distance itself from the TREATS concept. Meat is not a novelty food for a dog, it is base food. Our dog treats have more meat in them and are healthier than most dog food. The major difference dog food has is that it is over stocked with mostly artificially made vitamins and minerals (not chelated).  This is how aafco and the dog food industry,  made a permanent barrier to entry for companies trying to make natural dog food (meat based without an over-supply of minerals and vitamins) – as geniune natural dog food (meat alone) isnt sufficient in their eyes to be classed as dog food!

Our Healthy dog treats are more like serious dog food supplements for the 97% of dogs that are underfed meat proteins in their diet.  They are like super dog food, rather than dog treats. But corporate legislation (aafco) prevents us from stating that on labels.

You don’t have to be a Democrat or a progressive to buy genuine healthy dog treats, you just need do a little research and provide the natural best for your dog, OUR Healthy Dog Treats !