HEALTHY DOG TREATSBlogBlogDog Treats – The effect of mass media advertising and cartoons on normalising the bad.

Dog Treats – The effect of mass media advertising and cartoons on normalising the bad. 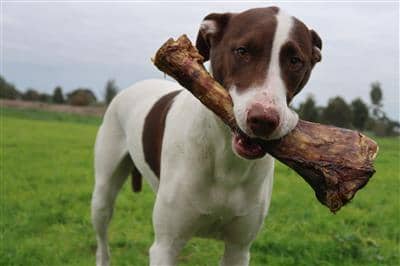 If you have read any of our previous blogs, you will know how easy it is for us to get fired up about nutrition facts, and the lack of meat in most dog’s diets. That can all get a little bit serious, so on this occasion, I would like to discuss the effect of media on society in relation to what we know about dog food and dog treats. And specifically the cartoon Dot.

Now having a young boy in our family, we get to see a lot of cartoons. And seeing an episode of Dot the other night made me think of how well ingrained it is that people think dog food is basically grains, that the media (even cartoons) keeps feeding us back that image. Its a destructive self-perpetuating cycle, but so you see how pervasive it is, consider this example.

In this one show, there was a moment where Dot decided that she was going to make this 3d printer, a food printer, print a ‘dog bones’. In my world, dog bones are actual bones of animals that dogs and wolves might have once eaten as part of their main diet.

Bones would not have been relegated to being a ‘treat’, but in this show, Dot decides to print a ‘dog-bone’ treat. The only thing is that the dog bone actually turns out to be a form of biscuit in the shape of a bone.  This is similar the American concept of milky bones for dogs, that have nothing to do with actual bones.

Nutrition-wise dogs NEED real animal bones in the wild for their calcium, phosphorous, ash (as fiber) and saturated marrow fat for energy. They serve a very important part in their diet, and in a raw diet for the modern-day urban domestic dog.

And here is one of the worst things about educating our young that dog treat bones are actually just ‘biscuits’.  The way Dot got ingredients for the 3d printer was to pour dog food pellets into the top of the machine, that just simply crushed the wheat-based pellets then reformed them into the shape of a dog treat ‘bone’.

Now if she used regular dog food, that would have had at most 30% actual meat in it. So while most actual modern-day dog biscuits usually have approximately 0% meat in them (or zero animal products – UNLIKE some of the black dog biscuits we sell), Then yes, the artificial dog bones that Dot creates do have more meat in them than the regular dog treats shaped like flat bones.

HOWEVER, the thing you should note about this is that most dog food is typically woefully below the animal meat protein that dogs really require the thrive, particularly when they usually aren’t sufficiently exercised or socialised daily either – so their digestion systems are already compromised.

The big shame is the normalisation of very average dog food and treats (vegetable-based) even in cartoons.

There have been human generations before us, and future generations, who will see such cartoons, and believe that dog food should be pellets, and that dog food makes the best dog treats bones (that, of course, are not REAL bones). Everything about the 3d dog treat printer results in further normalizing artificial dog food and dog treats so that it forms the basis of children’s and then adults knowledge of what to feed dogs. The dog food marketers dream. Free publicity for them.

This is one of the reasons that adults find the convenience of wheat pellets at the supermarket so irresistible and balk at the idea that their dogs could ever consume raw meat, let alone 80% meat (even in the dried human quality form). 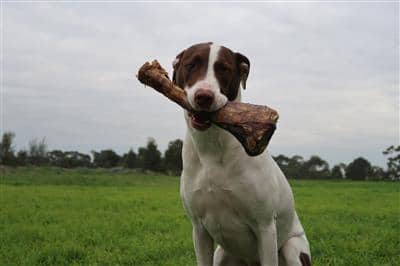 I get that this is only a ‘cartoon’, but since the dog food manufacturers have enormous advertising budgets, and now own Veterinarian chain stores and celebrity vet opinions, there is very little in this destructive cycle that gives the average owner any inkling that their dogs are not getting ‘whole and complete food’. Nor that there is anything wrong with their dog’s food being mostly composed of dried vegetable or their dog treats being ALL vegetable. Because they learned this in childhood, from innocent sources like cartoons.

To cap it off, a few minutes after the printer moment, one of the dogs apparently did something wrong, and Dot declared something to the effect that the dog was just ‘acting like an animal’. It was written to be ironic, but the irony is that she had just fed her carnivore dog, a dog treat that had no more meat in it than dog food, that is already drastically lacking in meat-based essential amino acids (bioavailable meat protein), MORE WHEAT. How does a dog act like an animal, let alone a dog, when it is not fed real food? Or enough meat in that food?

If the dog was really acting like an animal (the carnivore it is) it would have refused the treat based on dog food ingredients, like my dog regularly does each night when I try to give him a few high fiber pellets just to assist intestine health.  Yes, dogs can learn to enjoy the sugar in vegetables, but their real dog pack would not have taught them to try vegetables as the main source of their diet in the first place.

Cartoons, adult dramas, sitcoms, dog food ads, celebrity vets are all so in love with the idea that dog food can only be mass-produced, over-processed, and DEAD (no active enzymes), or made with insufficient meat-based protein, that EVERYONE takes it for granted. The erroneous concept that Meat is not food is normalized VERY early in our lives.

Many dogs become a human accessory, often a house or yard bound toy.  They are not walked, socialised or feed species-appropriate food – and yet media is puzzled over extremely bad dog behaviour, aggression and the escalation in dog cancers.

The natural wolf and early rural domesticated dog world didn’t know such problems because most dogs were bred with a specific work job to do, and ate a lot more meat. When media saturates us with grain-based pellets being the ONLY acceptable dog food, and dog biscuits (almost all-grain) as being the only acceptable dog treat – people have very little chance to disagree or even think that there could be wrong with this whole corporate machine.

Owners/ people are not at fault. We have seen this kind of groupthink before as companies and experts sold us on the health benefits of cigarettes, Bex and asbestos as safe and ideal for humans.

People wonder how something as ‘innocuous’ as fake dog food and faux dog treats, when everybody is doing it or hawking it could be bad for their dogs. People have too many other things to think about and don’t need their ‘headspace’ filled up with thinking about ‘natural’ alternatives to ‘regular’ dog food. And that is exactly what makes the pitch for actual healthy dog treats a lot harder. Then why bother defense is randomly thrown up.

If you are in doubt, please check any of the articles under the NUTRITION tab on this site and chase down the original scientific papers in the references. Its really an eye-opener, and your longer living dog will thank you.

Oh – and the ‘questionable’ additives still used in some dog foods, are NOT included in any of our dog treats. In fact, our 100% animal product range (about 90% plus of the products we sell) don’t have ANY additives – including preservatives.

Blog
Comments for this post are closed.
Previous reading
IF cows do better on grass (than grains) why do we keep feeding dogs grains?
Next reading
DOG FOOD: What Percentage MEAT does your dog NEED & what are they getting?