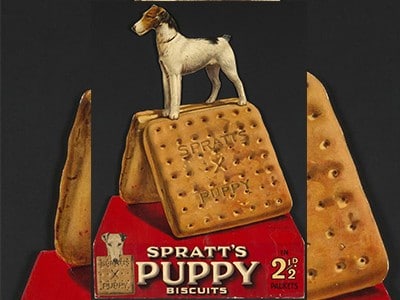 I didn’t know this until last week, so its gratifying to learn something new, that puts into perspective why our dogs are loaded with so many grains and we don’t bat an eyelid.

We know that dogs were fed inferior vegetables with their meat by farmers when times got tough centuries ago, and likewise, industrialised England didn’t always provide good wages or cheap meat for families either. But here is the actual reason why people accept that dog treats should be some kind of inferior confectionary for their dog.

The sad tale of woe for dogs the world over began with American inventor Jack Spratt in the 1850’s with a visit to mother England.

Down at the docks, Jack Spratt saw sailors throwing old biscuits called “hardtacks” or “molar breakers,” at stray dogs thinking that they were doing the dogs a favour. Yes it kept them alive, but like feeding white bread to birds causes the hideous and obvious debilitating disease called ‘angel wing’ (a horrible malformation of the wing) … dogs also are harmed by too much grain and vegetables. In dogs unfortunately the health effects (and diseases) take many more years to appear so owners arent even aware damage is being done.  And even when diseases occur in older age, it will never be attributed to commercial dog food – because the who dog industry (and commercial interests) are geared to make a profit from cheap grain food.

The sailor’s biscuits were made of the cheapest long lasting ingredients around (sound familiar)? Flour, water, a little salt, then baked to be rock hard. They had up to a 50 year shelf life, but when you are a starving dog on the docks you will attempt to eat anything to survive.

Spratt made the astute observation that the ‘hardtacks‘ could be a marketers dream. Something to sell to an untapped population (that could not complain about quality). Though to patent it, he had to add some propriety ingredients such as vegetables and a little meat.  They were called “Spratt’s Meat Fibrine Dog Cakes” and by the 1870’s were sold in America. Other companies soon fought to compete with equally cheap, but high margin fodder, legitimising it as something to feed to dogs..

It is true that ‘dog biscuits’ were sold in Britain as far back as the 1820’s but this was a low cost uninspired dog food replacement, with little marketing behind it. Spratt turbocharged it into the mainstream.

Flash forward one hundred years from the Spratt upgrade, and post war America saw many dog owners looking at offering their dog companions the luxuries that a post war consumerism America offered.

Human medicine and research was still in its infancy, as was nutrition information, so it was left to advertisers to convince a willing population of dog owners, that this pack of wheat with a few small additives would prove your canine love. Decade upon decade of making dog food and dog treats more unnaturally irresistible to the dog pallet, and mass advertising making you feel guilty at not feeding your dog more grain based concoctions ensured that the dog biscuit and its many variations were engrained into the dog owner psyche as proper food.

In 2018 you can get grain dog treats or sweet potato (nevertheless vegetable based) with ‘modern’ additives like coconut oil, fish oil, kale or some other ‘super-food’ but the additive percentages are typically so low, that these form of treats should truly be used in moderation.

The honest truth is that meat costs money to produce, a LOT more than grain.  And that reduces the margin that dog treat makers can make, if they have to price the product low enough for people to afford a lot.

As Australia exports more meat and farm companies become rich,  Australian humans and dogs have carelessly decreased their meat intake.  Unfortunately after decades of being convinced that grain biscuits are good for dogs, its become easy for owners to be convinced that its true and save a few bucks. Many people honestly believe that a carnivore dog actually deserves highly processed vegetable products?!

Did you know dogs are essentially still carnivores?

The domestic dog’s intestine is so short (carnivore) that they can’t make use of the proteins from vegetables as they can from meat dogs are fed vegetables. On a primarily vegetable diet dogs also miss the enzymes in meat that the carnivore utilises for full health .. so most dogs never experience anywhere near a carnivore diet required for real health.

Australia is about to have an enquiry into dog food quality control and lax labelling requirements, but that won’t address the extremely low meat content in dog food or dog treats. It is the first step in concerned dog nutritionist fight to get dog food education properly addressed. However it is likely to be used by the powerful dog food manufactures to continue legitimising an unregulated, unhealthy dog industry that flourishes globally.

Jack Spratt and his 19th century invention signalled the beginning of the end for proper dog nutrition globally. It heralded the end of meat being known as good for dogs, and instead installed grain and potato (convenient and moderately cheap) as the best you can get at a supermarket.

Now we know how long ago the inappropriate diets were created by a couple of dog biscuit salesmen, it is easy to understand why most people alive today so easily accept it.

Previous reading
Why cannabidiol dog treats and CBD oil for dogs Australia should be regulated.
Next reading
Natural teeth cleaning via meat based treats, not artificial ‘dental’ veggie gum.