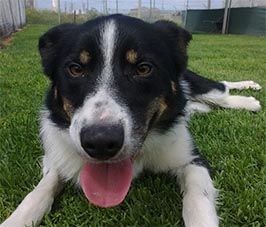 When you see this video, initially you may consider it to be fun, delightful. As the minute’s tick by, you will perhaps become concerned for the dog. Does the border collie have an obsessive dog behaviour disorder?

But really its all a matter of context, the things you don’t see or know outside of the camera field of view.

Before I launch into explaining the video, you should perhaps see what the owner says about it.

A few words from Rick the border collie’s owner

” You will often see the water behaviour in working Border collies as opposed to show Collies. The high drive makes them slightly obsessive about things that move. My husband had a collie that would watch sheep droppings float down the irrigation channel and herd them. “

“I have one that digs holes and jumps on the dirt as it moves coming out of the hole, Another has jumped on the automatic waterer and broken it off the wall(they love the hissing noise as they fill) My other two boys play basketball with each other (yes basketball) they bounce it and catch it with their paws for hours on end, another pup chases and works flys. It’s just being a working Border Collie.” (Kath the owner/ farmer)

The context of the border collie video

This is a young border collie imported to Australia from overseas and staying in quarantine for one month. Border collies were developed to herd, and in Australia mostly to round up sheep. They are considered the most intelligent domesticated dog on earth.

From my experience with border collies, they are one of the most friendly playful pups on earth. They know how far they can go with how hard they play with another dog, and often go through equal measures of dominance and submission in their play, with a dog of similar physical strength that is balanced.

Then sometime after 18 months, the herding drive seems to kick in and all the dog wants to do is herd. These dogs are bred to easily run 20, 30 or more kilometres a day, often in sharp fast bursts.

Unfortunately urban areas,  these dogs often don’t receive daily off lead exercise so with all that pent up energy and intelligence the dogs can often become anti social. Owners often misguidedly think that chasing and retrieving a ball continually for an hour or so will be fun for the dog and it will burn off their energy, but what it does is entrench obsessive dog behaviours.

It can make the border collie become anti social with other dogs and humans and even a bite risk. Another article suggests that over reliance on ball fetching can actually dangerously increase stress and cortisone levels, causing long term harm to a dog.

Since writing this article, Rick’s owner sent me some more news:

“Since Rick has arrived home he has settled into the routine on the farm very well. Although I have not had him on sheep yet ( I want to establish a better bond with him and let him just be a dog for a week or two first) he is enjoying the company of the other dogs and has not even looked at the water bowl here. He is starting to feel like he belongs to a pack and is finding his place and becoming more confident daily.

This was his final visit in quarantine before release. Aqis do as much as they can for the dogs in there, but with limited staff and hundreds of dogs and cats, it is difficult for them to give all the dogs a lot of free time on grass in the exercise yards. I was contracted to give this dog two half hour plays in the exercise yards per week. If you think this is too long, consider all of the other dogs who have to rely solely on the time that the quarantine’s staff can take them out.

You may not get this from the video, however this particular border collie was extremely friendly, timid and active. He progressed well with our interactions through the eight visits, but always had a ‘skittish’ part to his personality.  When entering the exercise yard he would mark territory, and run the fence lines looking for dogs to play with – while this could be frustrating for him, it was a great sign that he was interested in playing with other dogs.

Note, no dogs are allowed direct contact or play with any other dog while in quarantine unless they have arrived with another dog from the same owner.

While this dog was very timid with human interactions, very subservient, when it managed to overcome fears, it would love to snuggle and be patted. It would enjoy this as much as any other dog I have met.

The repetitive behaviour you are seeing in the clips is most likely a combination of play, and a  ritualised method it uses to gain control over its environment. In the small cement pens that they spend most of their time in, they can’t dig, or see other dogs or gaze into the distance to get their bearings. A very smart dog would become bored and stressed very easily in these conditions.

In the exercise yard, the dog can run full speed, retrieve, play alongside other dogs on the other sides of the fences, and play with whatever resources they can find in the yard. This can often be a ball, a tug of war game, chase etc.

In fact, on several other of my visits, this border collie would do a little ritualised water bowl and pounce and return routines, but this would normally last only a few minutes before I distracted him with play. He would then happily go onto patrolling the yard, or engaging in play or pats with me. Truly dog obsessive behaviour would be much harder to snap a dog out of, and they would show other signs, and they would usually try to go back to the safety of the routine, this dog never did that.

I have heard that many border collies are fascinated by water. In this clip you will see the dog take a gulp of water, do a little pouncing and digging near its bowl, then run the full stretch of the yard. He even does a few laps of the yard before returning to the bowl and doing a pounce and repeating the run.

He also looks through the fence, jumps up a few times, shows interest in other dogs.

At several stages throughout the clip you will see me filling the water bowl. This makes very little difference to his routine.

Someone suggested that he may be digging under the bench because he can smell something, or has found some bugs. but he never tries to bite anything. The base of the bench is likely to have many dog urine smells which could be exciting him, but he doesn’t stay digging he continues he routine.

After the ten minute mark he comes over to me for a pat, showing that he is being social, he is not completely oblivious to his surroundings and can still interact socially of his own choice.

The dog is still playing, with a level of ritualised obsession on top of that play. He is not completely oblivious of his environment or is not likely to have any long term problems once he is out of quarantine.

In fact he this lucky guy went to a farm where he will get to put all of those herding like practice runs (the repetitive bowl and bench runs) into full practice and be rewarded for his efforts.

Article by Bruce Dwyer. If you wish to use any of this information please refer to the article as a reference and provide a link to:  www.healthydogtreats.com.au

If you are interested on being kept up to date on dog article releases or healthy dog treat specials, Join us on http://www.facebook.com/HealthyDogTreatsShop