Pigs ears, the king of the medium to low chewing dog.

How did this come about and what kind of nutrition do they offer?

These and many other reasons are why a pig’s ear has become the nexus of all the good things:

Pigs ears are part of the human food chain, often in Europe and Asian countries. So it should be no surprise that this delicacy would make its way into the dog treat world in English speaking countries like Australia.

The reason that it is so popular is that they are one of the meat-based treats that are regularly available at supermarkets and discount stores. The massive issue with this is that these stores show no accountability or trackability for where their product comes from, and the cheapest source is from overseas. The issue with this is besides quality control, toxins that leak into the food chain, is also the poor track record or animal welfare for many low cost production companies.

That is why we exclusively buy and provide AUSTRALIAN PIGS EARS

This is pretty much the main question that our new customers have about this robust versatile product.  The reason why people love pigs ear dog treats is the tend to last quite a while for medium to big chewing dogs.  And the reason is, that even though they are relatively thin, and often quite rigid, is that they are a SINGLE piece of skin.  Composite treats that are cheaper contain grains such as wheat usually to keep the price down, and they are not expected to be any great chewing challenge.

Some disreputable sellers make a large profit on selling coloured ‘rawhide’ products.  When raw hide is a single piece of cow hide, without colouring or additives it makes for a reasonable chewing treat, but generally a poor idea for swallowing or nutrition.  Raw hide has often been cheapened and made dangerous by having high levels of tannins and other toxins, sometimes random pieces are glued together coming unstuck inside of dogs and tangling in their intestines callusing blockages.

That is why a SINGLE piece of pigs ear becomes so much more attractive, particular form a known origin country like Australia.  The value of pig’s ears lies in the method of how dogs have to approach eating it. Like most other single ingredient treats we sell, they have to start at one end, adding saliva and softening it up, before they can rip pieces off.  A traditional and very primal method that dogs and wolves use in the wild to survive.  And hence the massive release of endorphins in the process.

The other value of this treat is that it is a PREOCCUPIER treat, when you are leaving home and have a dog that might suffer separation anxiety, you want to leave something that you believe they wont choke on.  If you leave things that break apart too quick, they are gone and the dog is left thinking about the time it will take for you to return, and eon in their minds.

If you leave a bone you have to know that your dog can safely eat it.  And if it’s too hard for your dog to chew, they will often lose interest. If they can break it down, they might eat it just a little too quick and besides choking issues, they will get the high-density fat of the marrow, making it hard to keep them at a good weight.

So the length of time chewing issue is often critical to owners.

The treat needs to be enough of a challenge to last a while, but not too much so that they give up. If you enjoy giving pork treats to your dog as an occupier purpose, and pigs ears are not enough, many of our customers step up to the mini pork rolls or  the jumbo pork rolls. These are essentially rolled pig’s skin. A similar composition to the single ingredient pig’s ear, but typically taking a lot longer time to chew.

If you want LESS time to chew for whatever reason, but still love pigs ears, then a few pigs ear strips might be the perfect treat solution!

The point here, is do you want them to have a natural shape and tasty flavour pigs ear that will yield at just the right rate, or something that will take longer, but they might lose interest in? 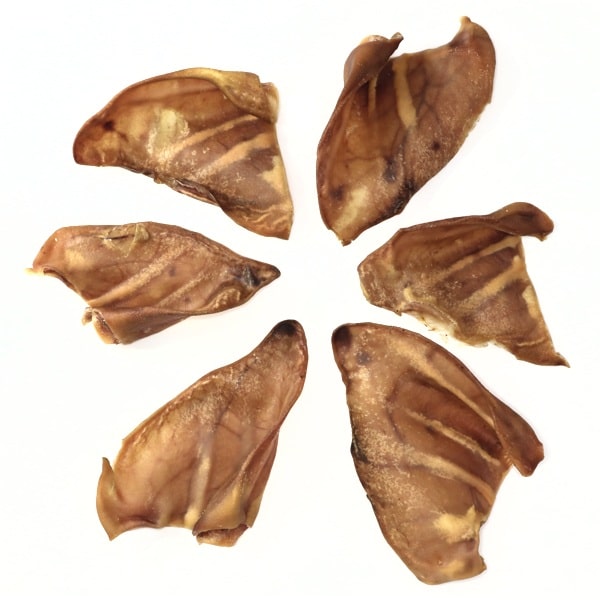 Here is the quick analysis of that site data and comparison to other healthy dog treat products.

The site gives their average pigs ear values at 111 grams (RAW), but we look at a 100g sample as it makes percentages easier to ascertain.

100g of pig’s ears gives nearly 700 KJ .  In 2021 our pigs ears were averaging around 40g dried.  If you remove most of the 75% water from a wet pigs ear (the value they have in their data tables) you end up with around the dried weight of our pigs ears, so all of the nutrtion data, except water will be correct in absolute terms (and of course all percentage values will increase upon drying).

So an active middle aged regular pet dog (not working, not pregnant etc) 20 kg dog would require approximately up to 600 grams of food (wet) per day. If they managed to eat a whole pig’s ear in a day that is still only about 15% of their food intake (based on wet weight value).  You will not have to remove much of their main meal to keep the same amount of calorie intake.

Meat based protein is the most bio available to your dog. The natural, easy to digest option.  Pigs ears WET (75% water) has an equivalent of 16 g fat per 100g of wet pig’s ear.

The reason why this is significant is that aafco only requires that dog food has 18% protein in it, and they don’t specify where that protein comes from, so as commercial dog food is typically only 20- 30% meat, it will have a lot of low bio available protein in it.  Giving your dog a pigs ear will actually give it a protein boost !

Note this is probably equivalent to 40g dried ear

As you can see, the fat content can by up to 20% of the treat (some fat will be rendered in the drying process.  But of the total fat only 40% of that is saturated fat.  That provides much of the energy available in the pig’s ear.

The great news is that it also contains Omega 3 and Omega 6.  The amount of Omega 6 is high, however Omega 3 is only approximately 10% of Omega 6.   Ideally the Omega 6 : )mega 3 ratio should be between 7 and 4.   That is why we recommend supplementing your dog’s dog treats with a treat high in Omega 3 such as kangaroo or most fish dog treats.

Much of why we promote healthy meat based dog treats is for the quality meat protein supplement they make to commercial dog food.  Using meats form different animals provides a diverse amino acid profile, that can benefit any animal.  Below gives you an indication of what a pigs ear protein (amino acid) spectrum looks like. 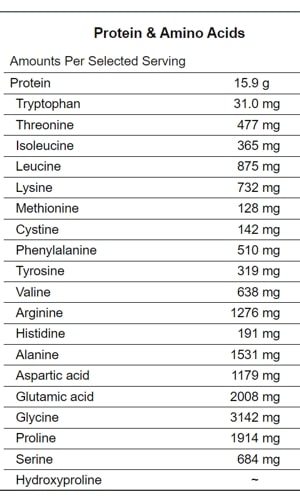