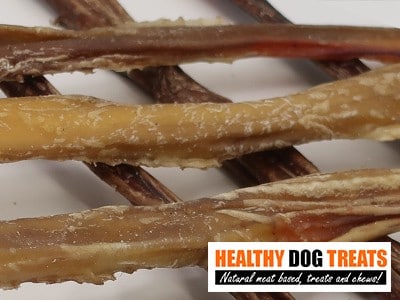 This is one of the more bizarre questions we were recently asked. But since its ‘out there’ I guess we should give you the full disclosure in all its glorious detail.

The reason that we find it bizarre, is that these bully stick dog treats are a major seller, and in fact incredibly sort-after by many dog owners. I hadn’t actually heard of them before I had a dog, or started selling dog treats, but I can tell you that some people ONLY visit our store to buy their bully sticks.

Bully sticks – what are they and why so good?

Bully sticks are also known as beef pizzle or bull penis. The reason they are so highly regarded is that they are a 100% animal-based product that provides very long, and safe chewing for many dogs. If you have a medium or big chewing dog, and you have to go out, but don’t trust them with safe eating of bones, then bully sticks are often the way to go.

They are essentially muscle meat, like beef jerky, but much thicker in general, so dogs can get a long chew and some very good nutrition at the same time.

We have them listed in the beef category and the LONG CHEWING treat category. They are so good, that we even include them in the LONG CHEWING Packs we put together for people to see how good they are for themselves.

What some misguided companies say about bully sticks

Firstly the only reason that they are called an “animal by-products “ by some sites, is that it’s the one part of the cow that humans typically don’t eat. Humans eat liver, kidney, heart and even brain (at least from lambs), but the bully stick has somehow escaped the human menu. By-product is actually a disparaging term that people use to try and con people into buying artificial, grain-based treats with lots of additives and huge mark ups to make the major companies more money.  It is an animal product NOT a by-product.

So, what is their beef?  Apparently, some tertiary domain, a University (who seem to promote grain-based pellets as the wisdom of all their years of training) decided to try and persuade people not to buy them, saying that they “might” have harmful bacteria and were high calorie.

The actual facts are that bully sticks are oven dried, just like any of our meat treats, and they don’t harbour any exceptionally higher level of bacteria than any dried meat treat – the bacteria count is actually low, since higher temperatures tend to kill most harmful bacteria (the reasons most humans cook their meat).

And while bully sticks have calories, they are MEAT PROTEIN based calories that the dogs actually need, as opposed to plant based CARB (sugar) calories that are nowhere near as bio available as ANY meat product. We don’t need to go to war with three researchers, but clearly, they have a very different agenda than feeding dogs a natural meat-based diet.

You might also not be aware, that far more Grain based dog foods in America have harmed and even killed dogs, compared to the miniscule risk that any properly dried commercial 100% meat-based treats might contain.  A short review of the bully stick misinformation downgrades the risk with stating “larger studies are needed to access the true risks inherent in bully sticks “. In other words, it was most likely a scare mongering campaign, all based on diverting money to less healthy vegetable based treats (with higher profit margins).

Bully sticks are a 100% (no additives) long chewing meat-based dog treat. When you buy ours, they are also AUSTRALIAN. Any residual bacteria found in them after oven drying, are typically destroyed by the very low pH stomach acid (high acid) that is common in carnivores.

Our bully sticks are ALL AUSTRALIAN PRODUCT only. The bacteria issue might be more common in imported bully sticks.

Bully sticks are high KJ product, but so is MEAT, because that is what dogs should eat. It is noted that very few dogs can eat a bully stick in a short time, so as that eating is often spread out over an hour or more, and they usually get one or two at most bully sticks per day, they do not create a major energy surplus for most medium to big dogs.

Bully sticks tend not to stain carpet and I have recently learned that they contain “high levels of glucosamine and chondroitin” – the two essential chemicals in shark cartilage that assist in preventing and alleviating pain from dog arthritis. Its starting to sound better and better isn’t it?

People wanting good quality bully sticks and service, seek us out. We have read that some consider there are equal alternatives to bully sticks like cow hooves, pig’s ears and pig shouts … and indeed we sell all of these products.

Our long chewing sampler pack contains SIX treats that can help people select other treats that they want to use along with bully sticks. The healthy, natural dog treat option is all yours.