HEALTHY DOG TREATSBlogBlogIF cows do better on grass (than grains) why do we keep feeding dogs grains?

IF cows do better on grass (than grains) why do we keep feeding dogs grains? 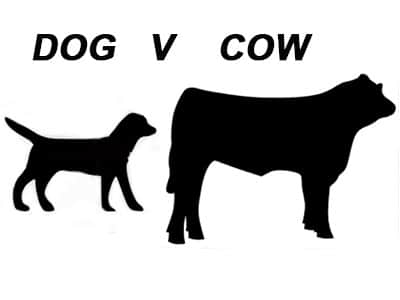 It used to be simple and clear. Dogs ate meat, cows ate grass.  Likewise, corn wasn’t found in 80% of supermarket products and people used to drink water.  These are now found to be non ‘old fashioned values’ but nutrition-based science reasons for keeping dogs, cows and humans on their original diets.

Only when farmers started easily growing a surplus of grains did marketers need to find new markets of where to stuff that surplus to make money for themselves. While many dog owners are sceptical at there being valid reasons for dogs not eating grains or vegetables instead of meat, why would nutritionist ban cows from eating grain? It’s science, really.

And here is the amazing thing, once you see why cows were forced to eat grains and why it’s inappropriate for herbivores to eat grains, its a short step to understanding why a carnivore dog shouldn’t eat grains (plus a whole host of carnivore reasons).

COWS fed grass are happier and more nutritious (for dogs human consumption). That means that cows while alive also have more nutrients in their bodies for maintenance and growth and being healthy.

The whole feeding cows grain thing became prominent during DROUGHTS. Then with persuasive marketing and bundling deal sweeteners on other farming products, it just became convenient to plump up the cows on grains in Feedlots. Much more convenient and cost effecting than moving cows from pasture to pasture for fresh grass.  The cow version of battery hens in some farms.

Why does this affect dog food directly ?  If cows can’t process grains properly, then it is even worse for carnivore dogs.

Omega-3s: This is where grass-fed really makes a major difference, containing up to five times as much omega-3

Conjugated linoleic acid (CLA): Grass-fed beef contains about twice as much CLA as grain-fed beef. This fatty acid is associated with a few health benefits.

Compared to grain-fed beef, grass-fed is much higher in the following vitamins:

Vitamin A: Grass-fed beef contains carotenoid precursors to vitamin A, such as beta-carotene.

Vitamin E: This is an antioxidant that sits in your cell membranes and protects them from oxidation.

Grain is cheap. Grain maximises manufacturer profit.  Grain can be processed so far that it becomes sterile (heat treatment) and in theory reduces chances of spoilage, though it often has a lot of preservatives added to it anyway.

At healthydogtreats, we have analysed the nutrition value of the major grains used in dog food and found that these alone rarely meet the minimum vitamin or mineral requirement of dog food as dictated by affco rules – unlike MEAT that is much closer to the high mineral and protein requirements.

THIS means that because grains are the majority bulking agent in dog food (typically 70% of the ingredients), and are low in nutrients, that the dog food needs a lot of minerals and vitamins added to them. The issues is that to save costs, many of these are artificially sourced and not chelated (most bio available).

While grain isn’t recommended for cows, it is far less recommended for dogs.  The reason is not only in the low amount of nutrition (vitamins, minerals and essential amino acids) but also the inherent differences in a true herbivore’s digestive system and a domestic dog (carnivore) digestion system.

The ONLY point that grain dog food feeders cling to as vegetables being valid for feeing to a domestic dogs is the existence of amalyse at all in a dog’s system. The amalyse chemical assists digestion of vegetable material.  While cows have a large amount of this in their mouth (while doing a long chew) and stomach,  Dogs have lower levels in their stomach and much lower amounts in their mouth.

Cows also have a lot more bacteria species geared towards extracting nutrients from vegetables and grains.  “The bacteria and protozoa do most of the digestion of feeds for the cow. This is a tremendous factory. There are 25 to 50 billion bacteria and 200 to 500 thousand protozoa in every milli-litre of rumen fluid (about 0.06 ounces).” Also , the cow reticulum, with its honeycomb like lining, is a compartment of the stomach that is involved with rumination.” (virginia tech) Dogs don’t have this kind of lining – they try and expel their waste as quick as possible, so if its not meat (bio available) the grain gets expelled well before all of the nutrients can be extracted.

A cows stomach acid level is near pH neutral (7), whereas the gastric acidity (gastric pH) of the stomach of a dog or cat eating a diet predominantly made up of raw meat is very low (very acidic), with a PH of 2 or lower (relative to the level of meat protein).”

As pH is a logarithmic scale that means that the acid in the dog’s stomach is 10,000 times greater than a cows, because it expects to eat meat, neutralise any bad bacteria and extract nutrients fast, before expelling the waste fast.

While dogs have been forced to evolve to tolerate grains and vegetable matter (owners feeding cheap grains to them), they do not thrive on it and are only evolved a SMALL amount to handle vegetable matter.

DOGS find it hard to digest plant and grain matter and so the minerals and vitamin amounts have to be set artificially high to account for the high speed of food expelled.

If experts are saying grains are bad for cows (omnivores) why are we feeding our dogs (carnivores) so much grain?

If you use regular dog food, please consider adding more meat, offal or bones to your dogs diet, so that it doesn’t have to work so hard at extracting nutrients.  When you add meat (via raw or dog treats) the nutrients are the right type for them to easily extract all the nutrients.

“In dogs and cats that eat these diets with high carbohydrate, high plant protein and lower meat protein, we find that the acidity level of the stomach begins to decrease (gastric acidity relates to meat protein), and the stomach becomes progressively more alkaline (pH 4 and above). In this less acidic environment, several key issues arise;

Note –  The food bacteria issue is most prevalent when you mostly feed a dog mostly veggie/ grain pellets then a little amount of raw meat.  If you feed them properly dried meat based dog treats, the issue is neutralised – and they still get the major benefit of meat based proteins and vitamins and minerals.

Blog
Comments for this post are closed.
Previous reading
Why the convenience of dog treats and dog food matter so much
Next reading
Dog Treats – The effect of mass media advertising and cartoons on normalising the bad.