Why faking the Umami taste in dog food and dog treats with MSG is dangerous. 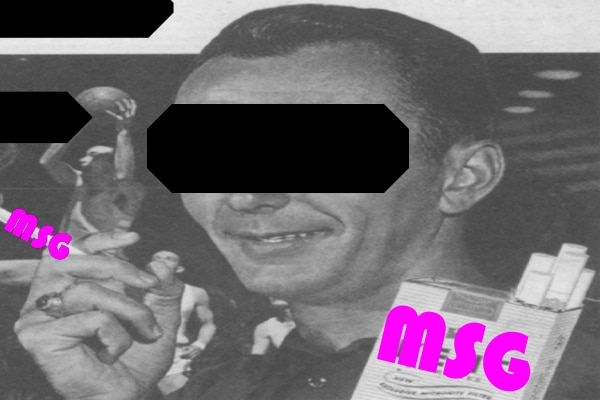 This should make headlines news across the world, if the world wasn’t hooked on feeding cheap non-meat dog foods. Most people are aware that dogs eat meat, that MSG is ‘bad’ for you, BUT not that a key ingredient in turning bland grain or vegetarian ‘dog food’ into something that your dog wants to eat is often MSG (in conjunction with other glutamates).

Note, this article is based on readily available information. You don’t have to believe all of it, but you might want to consider alternatives to the many versions of glutamates that disguise vegetables as that wonderful umami meat dog food and treat taste.

The following sequence of logic is why using unnatural flavouring additives to fool your dog into eating non-meat foods is a very bad idea (besides the many other reasons we have given in these HDT blogs like the bio-availability of actual meat and offal):

WHY using glutamates to fake meat taste can HARM YOUR DOG.

Our previous article on dog taste buds and a dog’s ability to taste umami explains why dogs need/ desire a meaty meal is key to their evolutionary drive to hunt animal prey. They hunt animals to eat meat and survive, and meat is the essence of umami for them.   https://www.healthydogtreats.com.au/dog-taste-buds/

But here is the kicker. What if there was a way to trick dogs into eating cheap ingredients, and even make them obsessively crave more, even not knowing when to stop? THAT is MSG and MSG and IMG glutamate combinations deceit.

For decades dog food labs have used this as one of the many methods of selling more of a nutritionally low product that with a little oil for a shiny coat, and good ads, has owners subjectively and wrongly assess these commercial dog foods as good.

Grains and vegetables are very bland and not bio-available to dogs (when compared to meat and animal products). If you train a dog to eat vegetables, they might like the crunch of a carrot or the rush of sugar from berries, but it’s not a NATURAL food (that they would regularly hunt in the wild), not something they evolved to eat. At best it should be a minor part of their diet, if pushed to survive on them. 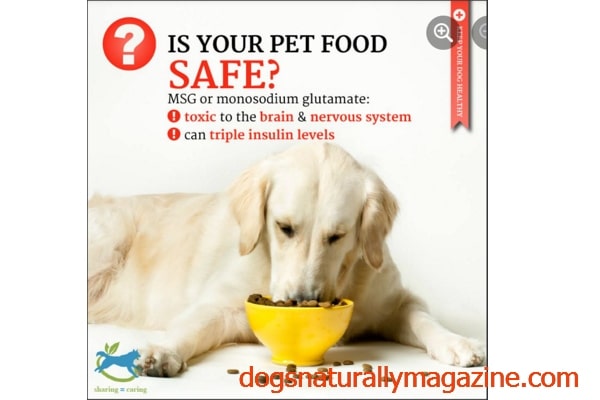 How DOG tastes and human tastes are Fooled by MSG

“The first electrophysiological studies on rats and cats show little synergism between monosodium glutamate (MSG) and disodium guanylate (GMP) or disodium inosinate (IMP). However, DOGS like humans were sensitive to umami substances and showed a large synergism between MSG and GMP or IMP.” Ref 1

The researchers also found that the “characteristic taste of snow crab meat is reproduced by mixing glycine, alanine, arginine, MSG, IMP and salts in a particular ratio (Konosu et al. 1987). When the umami constituents are eliminated, the characteristic taste of the crab meat disappears. Thus, umami substances are essential for producing the unique taste of many natural foods.”

If you want grain or veggies to taste like beef and chicken, a lab only needs to find the right combination of glutamates to fool dogs (and owners) alike. You don’t get what you pay for.

“In the canine chorda tympani nerve, a large synergism between MSG and GMP or IMP, similar to that found in humans. The synergism was remarkable at lower concentrations of MSG.”

This means that you only need a little MSG and GMP glutamates to turn an un-appetising cheap grain or NON-MEAT treat into something resembling a tasty meat dog treat. In that way MSG can appear down the list of ingredients by weight, but still exert a BIG taste effect.

But surely tricking a dog is fine, no damage can be done with msg?

Naturally occurring MSG is fine when it occurs in a vegetable naturally. In that case it is NATURALLY enhancing the flavour of the vegetable. The issue comes when dog food labs add the right proportions of the glutamate crystals to make non-natural dog food (vegetables), become dog food, and charge you money for it.

HOW IS MSG disguised in your dog food and dog treats?

The following is so important that we have to quote it in full.

“Is there MSG in your pet’s food? MSG or monosodium glutamate is toxic to the brain and nervous system and can triple your dog’s insulin levels. MSG litters our pets’ food supply in the disguise of “safe” ingredients. If you see any of these ingredients on your pet’s food bag, put it back!” Ref 2

How MSG Changes your dog’s Brain and hunger response

“MSG is used as a flavour enhancer … but it’s actually quite tasteless itself. It works by tricking the brain into thinking food tastes good. It’s a type of neurotransmitter known as an excitotoxin, meaning it over-stimulates the brain, causing an overproduction of dopamine. This creates a brief sensation of wellbeing.” Ref 2

“But it damages the brain and alters its ability to respond to the signal from the hormone leptin that tells us we’re full … which is why, when you eat foods containing MSG, you just want to keep eating, making the food seem almost addictive.” Ref 2

A couple of things to unpack here.

“Labradors were predisposed to have a deletion in the genetic code of the POMC gene which scrambles the end of the gene and hinders its ability to produce the neuropeptides associated with turning off hunger. “  (ABC site). They might not be the only dog to have this issue, so you can imagine how much more difficult it becomes when a dog predisposed to thinking it needs to overeat, is given an artificial crystal additive like MSG that also tells it to REALLY demand excess food that it doesn’t need. The dog might then spend most of its time worrying about food, being an anxious and sometimes aggressive ‘food guarding’ dog.

You probably also know that dogs have their scavenger trait evolved from wolves that had to hunt to survive when they are unable to catch prey. It is NATURAL for a dog to eat as much as it can, whenever it can, and even hide food for later (burying or putting behind furniture in your house). If you own a dog that struggles with excess appetite, MSG is doing neither of you a favour.

In humans MSG has been found to trigger or aggravate learning disabilities as well as diseases like Alzheimer’s, Parkinson’s, and Lou Gehrig’s. In mice, injecting MSG into them has shown liver inflammation and obesity and Type 2 diabetes, neuroendocrine disturbances, behavioural disturbances, as well as foetal brain damage.

AND the MSG and effects are accumulative.

There are also other ways that MSG can enter into the dog food chain, even without direct addition of the chemical.

“When vegetables and fruit start to spoil, they’re often used in pet foods and advertised as all natural healthy ingredients. There’s no way of knowing whether MSG is in the produce in dog foods. Processed free glutamic acid is in many dairy products like milk or cottage cheese, so if you add dairy to your dog’s diet, he may be getting some MSG that way too.” Ref 2

Umami is a natural meat taste dogs evolved tastes buds for to be rewarded for eating their kill (meat). That is why MEAT and single ingredient meat and offal treats are GOOD and Beneficial to a dog’s physical and mental wellbeing.

It is obvious that MSG (and other glutamates) have many names and can appear in many dog foods and treats that include vegetable or grain, intentionally or otherwise.

Not every dog will have a severe reaction to ingesting small amounts of msg. However, MSG is accumulative.

MSG when added to dog food is ONLY to enhance a boring flavour, a non-natural flavour, a non-meat flavour. Why would you want to cheat your dog, let alone unnecessarily give them a dangerous additive?

With so many versions of msg and glutamates it might be very difficult for you to avoid it in dog food.

Just another great reason why single ingredient MEAT treats, that have NO additives are still and always will be the best thing for your dog.

Blog
Previous reading
Ketogentic (keto) dog food is big in America, how does it stack up against commercial dog food?
Next reading
What dog food is best? Canned, fresh, small or large chunks?