HEALTHY DOG TREATSBlogBlogDo dogs have taste buds? Yes! Dog ONLY has 1600 taste buds, but they have specialist MEAT & WATER!

Do dogs have taste buds? Yes! Dog ONLY has 1600 taste buds, but they have specialist MEAT & WATER! 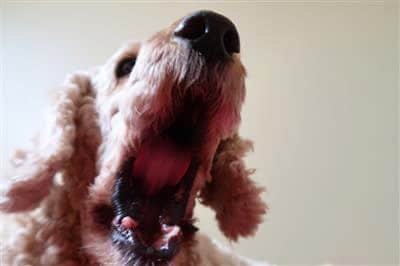 Do dogs have taste buds? A dog’s primary sense is its sense of smell. Its hearing is typically better, and its eyesight is just different from ours (restricted colour vision, better night vision).  But since we sell healthy dog treats you might think that a primary concern of ours should be taste.

The reason we have not delved into this a great deal is that dogs are evolved to eat meat. Therefore their smell and taste is prime to detect and enjoy meat. We don’t have to worry about disguising or adding anything to our meat products to get your dog onside. But now science for dog’s taste also backs up our long held philosophy and theory with science.

Just like humans  “taste buds” are found in small bumps on the top surface of the tongue and are on bumps known as “papillae.”  There are also taste buds on the soft roof of the mouth (palate) and the back of the mouth near the throat (“epiglottis” and the “pharynx”).  But its the extra tast buds that dogs have that is the most exciting discovery …

While a dogs taste buds are not as numerous as humans the nasal and throat cavities of a dog are connected (unlike humans) so dogs can enlist their much more refined sense of smell to assist in their taste buds to sense meat.

Any animals smell sensitivity is dependent on the number and type of taste buds, and a dogs is only 1700 taste buds compared to humans 9000. But that is still well ahead of a cats 470 buds.

Humans are said to have taste buds that can detect four major tastes: sweet, salty, sour and bitter.  and lately research has detected a fifth: umami (a savourytaste that soy sauce has much of).

It is likely that dogs are not a big umami expert (considering that it was only really discovered in humans recently) however the big difference appears to be that dogs don’t really detect saltiness – meaning that adding extra salt to dogs food can be dangerous.

” Dogs, however, are primarily carnivores and in the wild, most of their food is meat. Because of the high sodium content in meat, the wild ancestors of dogs already had a sufficient amount of salt in their diet and did not develop our highly tuned salt receptors and the strong craving for salt.” Ref 1

“Dogs also have some specific taste receptors that are tuned for meats, fats and meat related chemicals. Dogs will tend to seek out, and clearly prefer the taste of things that contain meat or flavours extracted from meat.” REF 1

” Sensitivity to meaty tastes is scattered over the top of the tongue, but mostly found in the front two thirds. Dogs also have taste buds that are tuned for water, which is something they share with cats and other carnivores, but is not found in humans.” REF 1

The author of the reference only puts dogs carnivore value at 80% because . But this is loosely based on the finding that dogs respond to a chemical called furaneol. And this chemical is associated with many fruits and tomatoes. But this 80% figure is plucked from the air as he takes the massive leap in logic that dogs might supplement their diet with up to 20% fruits because they have a fruit sensor. Humans still have a vestigial tail but that doesn’t make most of us monkeys!

We put the carnivore dog value at more likely 95% because they would only eat berries and other sweet tasting things to survive when the pack cant hunt down enough prey to sustain themselves. They would not regularly forage for underground vegetables such as potatoes and carrots, because they were carnivore and these vegetables don’t have the pungent smell of meat. Giving a dog 30% meat is just a cost convenience of the dog food makers, not the reality of the needs of the user (dogs).

The fact that dogs have taste buds associated with MEAT that humans (true omnivores) don’t have, and dogs have a carnivore digestive system, bodes well to them still having a major requirement for MEAT that most dog foods do not provide. Most dog foods have TVP’s (fake meat) and label splitting and numerous methods ot make you think you are feeding your dog meat, but you are mostly feeding them grains and veggies.(if you buy commercial dog food).

A reduced number of taste buds might mean that they aren’t able to define the nuances of salty   things but since their noses do 10,000 times the work of their human counterparts, and their noses work in conjunction with their tastebuds, they are still able to detect meat products easily when they encounter them.

Dogs raised on raw meat will eat grain based dog food when they are forced to or are extremely hungry. It is never a first preference.  A dog raised on pellets typically is much more accepting of eating a dried or raw meat product. Hence our offering …

Previous reading
Why do dogs have taste buds evolved to detect and ENJOY meat and water.
Next reading
Affordable Beef Jerky dog treats in Australia