HEALTHY DOG TREATSBlogBlogWhy your dog is now like Pandas and cows – bio-availability ..

Why your dog is now like Pandas and cows – bio-availability .. 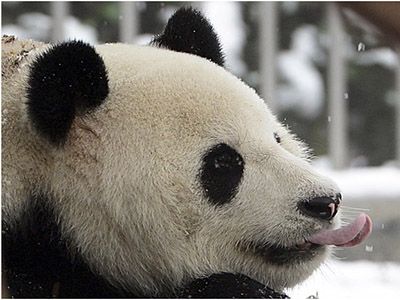 Most people dont get the importance of bio availablity for a dog.  They think its just a hipster term. We would much rather just go to the supermarket and pick up a sack of wheat for our carnivore dog. Its convenient and the price is right.

So at Healthy Dog treats we look at novel ways of getting the message across that carnivore dogs do much better on meat.

The fact that I put the word carnivore in the above sentence might give you a hint as to a dogs food preference but its also an evolutionary mandate.

Just because you feed steak to a cow for 10,000 years, would not make it a carnivore. For a similar reason, progressively adding more grain to a dogs diet (because its cheap) doesnt make it a herbivore.

People like to think that dogs are omnivores, but just because a dog doesn’t get immediately sick by being fed a mainly grain diet, doesn’t meant that this isnt doing the dog damage. Read the quotes from the science article below if you still doubt this.

Don’t look to commercial dog food companies for advice, they are making billions off your dog by feeding them grain.  Look to science groups that dont sell kibble or nature instead.

Did you know that in ALL animals, ” digestive enzymes are produced primarily in the pancreas and released into the duodenum to help digest food coming from the stomach.”   REF  1

Have you ever wondered why there is a spike in pancreatic disorders and cancers in modern day dogs??  Read on ..

A quick lesson on enzymes:

1. Protease, to break down protein
2. Lipase, to digest fat.
3. Amylase, to process carbohydrates.

“Most mammals produce amylase in the saliva, but dogs and cats do not. This reflects their expected diet of meat and organs from prey. Herbivores and omnivores have flat molars that crush and chew food, but the carnivore’s dentition is perfectly designed to capture and kill prey, and to rip and tear meat from bone.” REF 1

Carnivores don’t spend much time chewing; nor do they consume many carbohydrates, so there is no need for amylase in the mouth.”  REF  1

” Wild canids (dogs) commonly take advantage of the lysozomal process by burying parts of the carcass, and digging them up and eating them weeks later. In those scenarios, both internal lysozymes and various external organisms (bacteria, fungi) contribute to the food breakdown normally performed by the pancreas.

” When heat destroys (“denatures”) the natural shape of enzymes, they become non-functional. In dogs and cats that eat heat-processed pet food, those enzymes are absent; the pancreas must provide all the enzymes needed to digest the food.”  REF 1

“In addition, commercial dry kibble is also much higher in carbohydrates than the carnivore’s natural prey diet. While cats’ and dogs’ pancreatic and intestinal tissues can and do produce amylases that are fully capable of digesting carbohydrates, the lack of salivary amylase reminds us that nature did not intend carbs to be their primary source of nutrition.” REF 1

Now this whole article (REF 1) could be cited here to convince you to consider supplementing commercial ‘dog food’ with high quality meat based dog treats from us, but Google might consider that a copyright infringement.  Instead if you are really interested I have included the link at the bottom of this article.

The link between Panda’s, Cows and YOUR DOG

Now back to the core of this article.

If you dont know about the pandas main diet, they mostly eat bamboo.  The difference between them and dogs is that they are still eating their original diet. the unfortunate thing for them is that they have to eat almost every moment of their waking life because the food is low nutritionally and they also have an issue with the enzyme they need for eating their main food.

“The (pandas) do not have the genes for plant-digesting enzymes in their own genome,” said lead author Zhihe Zhang, director of the Chengdu Research Base of Giant Panda Breeding in China. This, he says, “may have increased their risk for extinction.”  REF 2

Now if the panda had the right enzyme then bamboo would be known as bio available for them, and they would only have to eat a tiny fraction of the amount they eat to flourish. They could spend their free time doing other things and their digestive system would not be massively stressed trying to squeeze nutrition from the mass of food they must consume.

Here is the parallel in the dog world.  Dog’s do have a measure of the Amylase enzyme, to process carbohydrates, but no where near the amount of herbivores or other omnivores like humans.  And the enzyme is much lower in their mouths indicating a strong tie to their carnivore past (plus the whole type of teeth, short intestine and high stomach acid set up that ALL carnivores have.

This means DOGS must eat much more kibble than they would have to (if they were a true omnivore) and they will either get obese or nutrient deficient if they dont eat more.  Their pancreas works overtime to provide extra enzymes to digest grain, and because grain is massively heat treated (unlike our jerkies) they get even less nutrition from their grain based diet.

No dog in the wild has a main diet of grain or vegetable, and 10,000 years or so is far too short for humans to force a dog to become a true omnivore.

Your dog will always do better on meat. And if not a raw meat main diet, then a slow dried meat treat supplement is by far the next best solution.

Previous reading
Merry Christmas and goodwill to all dogs and owners !
Next reading
The day that supermarkets took over dog treats in Australia