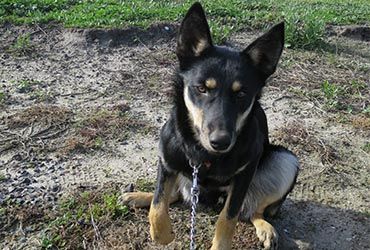 Now to the unsavory matter of pet food and the 4 ds. It is well known that meat makes up a minor part of most man-made dog food. But did you know that the component called “meat meal” as used in dog food around the world can include zoo animals, road kill, and 4-D (dead, diseased, disabled, dying) livestock ??

It is also well known that many dog shelters send their dead dogs and cats to rendering plants that boil these animals down and these also become “meat meal”.  NOT in every dog pet food of course, but as there are very few laws in the world against this practice it is still ongoing in many countries. including America, where most of Australia’s dog food currently comes from.

The practice of feeding road kill to dogs

This practice of feeding dogs roadkill appears to be more prevalent in America and UK, but it could soon catch on in Australia. A wiki article suggests that over 70% of road kill in Australia comes from Kangaroo, and as Kangaroo is one of the healthiest meats to eat on this planet it might make sense not to waste such meat.

It is true that very little quality meat is used in most dog food (and by meat I meat actual meat, not ‘meat by-products’ or ‘meat meal’).  This means that the majority of protein that is vital to a fit and functioning dog is provided by plant matter that is simply not as bioavailable to a dog, which is a carnivore because they can’t as easily extract protein from plants.

So if dog food doesn’t contain much meat, and people don’t want to spend money or time on preparing fresh meat from the supermarket, then perhaps roadkill is a healthier solution.  Of course, the roadkill can’t be diseased or too degraded (rotted).  As a raw feeder I understand the value of providing roughage and fiber in a dogs diet to keep a healthy intestine – and feeding the whole or almost whole animal, from road kill sources might be a perfect solution to this.

While there are legalities in different countries about using road kill and most people will be too squeamish to use it, at least in road kill you will know what parts of the animal are ending up in your dog food. And you can make sure that it’s not another dog or cat being used as meat.

The problem for many Australian dogs is that the standard domesticated dog hasn’t been exposed to many bad bacteria so most dogs have not built up a very good immunity or any defense to bacteria and viruses that can be found in road kill.

In fact, the excuse that many dog food advocates put out about not feeding your dog a raw or natural meat diet is about the safety concerns of raw meat. Which of course can be completely made safe by using meat meant for human consumption and freezing any meat or offal that you suspect could contain nasties.

And now for the gratuitous plug. If you suspect that your dog needs more meat in their diet (you know, because they are a carnivore) and you don’t want to make up raw meat meals (and work out what the ratios should be) – and you don’t want to scrape your road kill into your dogs bowl – THEN meat based dog treats make an exceptional value and convenient method of getting that meat into your dog.

Blog
Comments for this post are closed.
Previous reading
Why a dog selecting Tripe (as dog food) as first preference proves carnivore theory
Next reading
What dog food and dog treats not to eat in Broken Hill outback