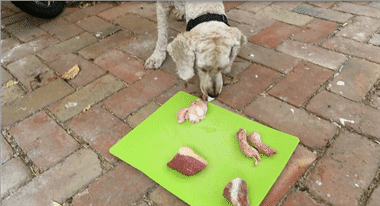 If so many people where not hooked on buying convenient bags of grain for their carnivore dog, anyone trying to prove that a dog was a carnivore would be ludicrous.

The recent evolution from the wolf carnivore, their intestine length, stomach acid and the many other biological and physical set ups of dogs all point to them still being at least 95% carnivore – so what does a dog eating tripe have to do with more proof that they are a carnivore?

Put simply, there is a ridiculous argument out their (mostly by dog food manufacturers, then taken up by retailers – all of who make money off your dog) that you have to buy overpriced bags of grain for your dog because they need carbohydrates. And one of the most ridiculous arguments goes a little something like this – that wolves and wild dogs eat the prey’s stomach first because they are trying to get at the grass and grain in the stomach.

OK, let’s pretend that is a real thing for all wolves and dogs. And ignore the fact that both carnivores eat grass to be sick as well. Ignore the yummy warm stomach juices that this grass and veggie cocktail is floating around it. What else could it be about the stomach that wild or domestic dogs eat it for?

TRIPE sheep’s stomach and a dogs preferences to eat it.

If you look up nutrition tables for tripe, you will find that compared to beef, chicken, fish or kangaroo meat, that it is devoid of much of the protein, minerals and vitamins that are in these other basic muscle meats. So the selection of the stomach would not have to do with an inherent knowledge by the animal that the stomach is nutrient dense.

In my experiment as shown in the video below, I discovered that the smell and texture and taste of sheep’s stomach (and possible by extension many prey’s stomaches) are an irresistible combination for my dog, and probably many dogs.

I feed my dog mainly a raw diet, where 70% plus of the food is a common meat source, then offal and bones make up the rest (in the right proportions based on raw feeding rules and with reference to aafco tables) … but as a treat I have tried experimenting with the more  raw offal and other meat sources.

It used to be the chicken necks that were my dogs preference over other meat products because of the primal crunchiness of them. But as my dog is a spoodle (with a highly developed nose from the English cocker, and a refined taste bud from the poodle) he is a lot more discerning than many other dogs in what he eats.

So the experiment and food trial on video shows my dogs preference for sheep’s stomach TRIPE over raw chicken breast meat, chicken necks, lamb heart and beef meat. EVERY TIME.

The first trial shows him pretty much walking straight over to the mat and going straight for the tripe. There was no training or forcing involved, this is his own preference.

The second trial shows the same five meat products all raw. all meats have previously been enjoyed by my dog on a relatively regular basis. None are considered novelty or rare meets or rare offal. You will see that he sniffs each one with some degree of interest and thought, but without chewing on any. Then he walks around to the meat most away from him, to the tripe and picks it up and consumes it whole.

Taken on its own, this would not be a massively remarkable video of a dog eating meat, if it were not for the context of the story of dog food makers saying a dog eating tripe is proof of it being an omnivore or vegetarian.  They use the counter intuitive argument that a dog eating the prey’s stomach is somehow proof that they are not a carnivore!

You will notice in this video that the tripe is cleaned, and empty of all grains or anything else that might have been in the sheep’s stomach. My dog is eating it FIRST as his meat preference, because the tripe is  MEAT – and for that reason alone.  He finds it sumptuous and when I prepare his meals at night, and if I have bought tripe for that weeks shopping, he will sort through the meat in his bowl until he finds the tripe pieces I cut into little chunks, and will invariably eat them first (if not too hidden).

Clearly this is not definitive proof that a dog is a carnivore, any more than 97% of scientists believing that carbon dioxide produced by man is a major contributor to unnatural climate change and heating of the planet.  But it kind of makes sense that eating a meat stomach is more likely to prove a dog is a carnivore than that it is an omnivore. Or that a dog evolved from a wolf would still be a carnivore, with a few berries on the side in emergencies ..

This video should at least go some way to showing that a dog (and perhaps all dogs) eat stomachs in domestic situations and in the wild because of the actual stomach itself, nothing to do with any potential contents.

Yes there is a personal interest in my proving that a carnivore dog, is a carnivore – because I sell meat based dog treats. This would not be as important for a do maybe if dog food had anywhere near 50% meat in the kibble bags or cans, but they don’t. If you are or are not a raw meat feeder to your dog, meat based dog treats are a great supplement to their regular meal because of the bio available proteins available in meat.