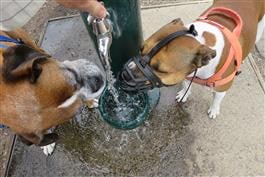 Keeping a dog fit and healthy should be a simple matter. Walk it off lead, feed it meat, give it water, affection and discipline in all the right doses.

This dogblog is all about water. With summer in Australia, even though December has been uncharacteristically cold the temperatures are much higher than in winter.

Most dogs are European based breeds here, and so they were bred for cooler conditions. It doesn’t take much with a bit of territory marking and running around for dogs in off lead dog parks to get very thirsty and dehydrated.

Dehydration means not only will the muscles not work at optimum levels and the dog get distressed, it may act out of behaviour and get into fights.

It will store up toxins in its body because it cant flush them out. Dogs only sweat through their pores or heat is removed through panting, so it is often difficult for a dog to cool itself. Without sufficient water in its body it makes the task even harder.

The best off lead dog parks in Melbourne

That is why the best dog parks are those that have plenty of water taps in easy access of all parts of the park. unfortunately many parks in Melbourne don’t have this. They often have taps in the children’s part of the park where dogs are not supposed to be, or they have one tap for the whole large park.

That is why bringing water bottles yourself may be a good idea. You can always use a doggy litter bag as a temporary bowl if you get halfway around the park and are too far from a tap.

Even in spring and autumn I make sure we at least have one long stop at water taps in the dog parks.

And of course leaving plenty of refreshed daily water in big buckets around your home and your yard, without algae in them is essential to good dog health around your home.

The next time you casually take a drink from the office water fountain or from your refrigerator, imagine having to rely on someone to think in advance of providing that water for you – someone that you could not ask, but you just had to rely on them knowing the right thing to do.

Dogs rarely drink too much water, unless they are already very dehydrated and start gulping uncontrollably. So as a general rule there is no such thing as too many water sources for a dog.

I hope this adds to your enjoyment of parks, your dog and your dogs health !

Previous reading
Amy & Archie dogs the social chase in the local park
Next reading
The Catahoula Leopard Dog. The state dog of Louisiana