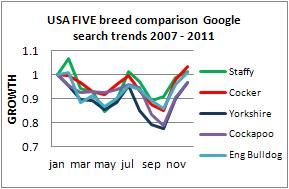 For each breed, the best time to buy is when people are not searching for that breed, so there is more choice!

Google trends data is used because it receives the majority of search queries globally and so the data is the most accurate available. The growth shown on the graphs is the specific dog breed as compared to the average of all other google searches. This means that an end of year (December) value of unity (1.0) may actually be quite a positive growth rate in absolute terms.

In the previous report it was seen that dog online search trends have most correlation within a country across breeds than between countries, so for clarity graphs will mostly be for all breeds in each country.

Out of the three countries, Australia dog breed popularity trend shows the least correlation between dog breeds. Also, the data was the least available of all countries. This happens when Google considers that monthly visitor numbers are too low to reliably provide data. As most regular search terms have data back to 2004, this shows the low number of searches for some breeds.

For instance the Staffordshire terrier was chosen for analysis as in August 2011 it ranked as the fourth most popular dog breed searched (55% of the leading Labrador breed). However trends analysis shows that the first data available for the Staffordshire term occurred in April 2009 and data was intermittent for that year, so in reality there is only several years of data trending available for this breed. This is also the main reason for the ‘blockiness’ of the green trend line as more years typically smooths a dog breed trend line.

Similarly the cocker spaniel data is only reliable for mostly 2009 onwards.  Due to there being only several years of data a strong trend has yet to emerge and it is not graphed.

The Yorkshire terrier was ranked tenth most popular dog breed in Australia and the English bulldog had about 75% of the Yorkshire’s search volumes however both completely failed to have any data shown in Google trends.

This leaves the spoodle (cocker spaniel-poodle cross) as the only other breed under analysis here that had some data over the last five years. The spoodle was outside of the August top ten breeds however did record data for 2011 as shown below. 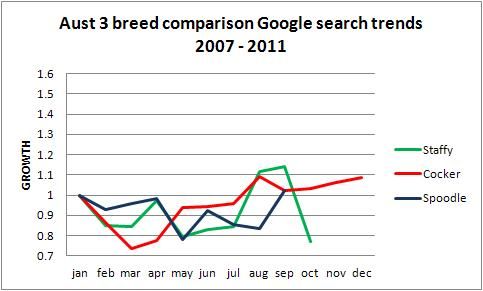 The general trend across all breeds in the US under analysis is that interest/ searches fall from January to May, have an upswing until July, then all decline until October, then all have an upswing to near unity in December. This shows that even though American dog ownership is on the rise, that the general dog breed search trend is only just keeping up with all other searches on Google.

The Staffordshire bull terrier ranked slightly outside of the USA top ten breeds in August 2011, however it did have five years of data available for analysis. It was noted that while the data for Jan through to June was similar for each of the last five years, 2008 had a large upward swing in Google searches and 2010 had the opposite trend. The Staffy breed showed the highest search peak of the five breeds slightly over unity in July ending the year very near unity.

The Cocker spaniel was the fifth most popular searched dog breed in America in August 2011 (37% of the most popular breed).  It also has five years of data available for trend analysis and except for the Yorkshire terrier, the cocker had the most consistent (high search correlation) across all years. Its peak year was 2007 and its lowest search growth year was 2010. The five year average had a yearly growth of 3% while the 2009 / 2010 average showed a December search value of minus 7%. Because of the high correlation of all the years a skewing factor can occur when normalising all data to a January value. This means it is likely that a small positive search growth (compared to the whole Google market) is more realistic, rather than a decline.

The Yorkshire terrier was the equal sixth most popular dog breed in America (30% of the most popular) and had the most correlated search growth trends for the last five years. The only low correlation year was 2008 that had a much lower April/ May (minus 25%) search period and a much higher December (120%). Similar to the cocker spaniel, the Yorshire terrier ended the year five year average minus 3% while the 2009/ 2010 annual growth was minus 18% down from the January value

The English Bulldog was the fourth most popular breed in Aug 2011 (55% of the most popular). Its search trend pattern was one of the most scattered except for the Staffordshire bull terrier. The highest growth year was 2007 which had a peak of 18% in June and the lowest growth year had a trough of minus 23% in October. The five year average growth was very close to unity with the 2009/ 2010 growth being minus 7% down on the January value.

The Five year cockapoo search trend graph is shown below. The cockapoo (or spoodle in Australia) was the highest ranking designer dog in USA in August 2011 coming in at equal sixth place at 30% of the most popular dog searches. Of all of the breeds analysed here, it had the overall flattest average search growth trend from January to August. The peak cockapoo growth year was 2007 (July peak of +8%) and 2010 was the lowest growth year (trough of minus 27% in September). The five year end of year average for the cockapoo was minus 3% while the 2009/ 2010 average was minus 10%. 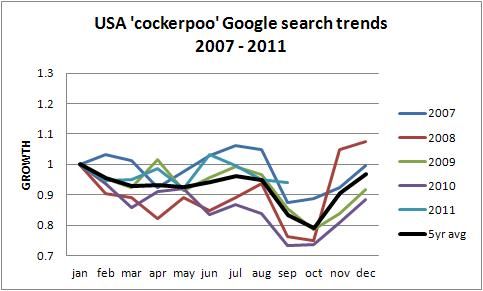 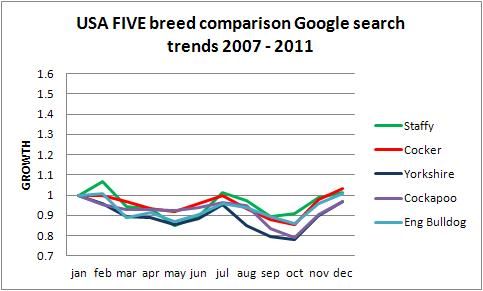 The first thing you will notice about this graph is that while the previous UK dog trends graph showed the highest correlation of all countries across breeds, this shows quite an amount of spread. However like the USA graph a general trend can be found. Dog breed searches a split between breeds that either increase or decrease continually until June and then they ALL have an upswing with a peak month in August (the height of summer). They typically then all decline in search popularity until they bottom out in November and have a small rally in December (except the English bulldog that has a strong growth and the Cockapoo that had a continued decline).

The cocker spaniel had one of the most correlated search trends of all UK dog breeds. The graph is shown below. This dog popularity may partly be to do with its great hunting ability and that it was developed in the UK (English cocker spaniel anyway). It was also the equal most popular dog breed search term in August 2011 in the UK. As can be seen on the graph below there tends to be a steady decline in searches between January and June then a strong upswing in August with an average peak of +16%. Following the peak a steady search volume decline occurs to the end of the year with the five year end of year average being minus 8% and the 2009/ 2010 average of minus 12%, as compared to the whole google market.

The Yorkshire terrier was the eighth equal most popular dog breed in the UK in august 2011 (55%). While the general shape of each year growth trend was similar there was quite a divergence in absolute values. The peak year was 2007, peak of +37% in August while the lowest growth year in general was in 2008 (trough of -19% in May and November. The five year average ended near unity while the 2009/ 2010 average was minus 7%.

The cockapoo has been an American invention and while the earliest recording is in the 1950’s their massive popularity as a non shedding designer dog has only been in the last decade. It is likely that the UK cockapoo is a cross between the English cocker spaniel and the poodle. Similar to Australia, the UK does not have a full five year Google search trend history for the cockapoo. The only reliable data is for 2009 onwards. While this low amount of data might somewhat account for the unusual high peak in August, it should be noted that this general trend was experienced for most years. All of the data for the available  years is highly correlated with the cockapoo search popularity showing a strong upward increase in searches from January through to August and a steady decline until December. In 2009 the cockapoo yearly growth was +30% while in 2010 it was 7%.

Ironically the UK English bulldog did not rank in the top ten most popular UK dog breeds and only reliably had data for 2010 and 2011, hence the erratic nature of the average English bulldog trend line. That said, the data for these two years was highly correlated with a fluctuating positive growth from January to a peak in August. 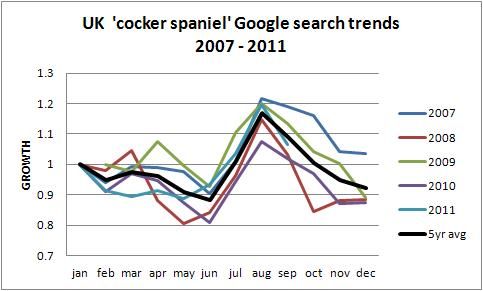 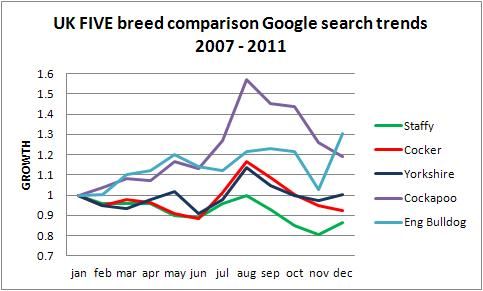 The previous report showed that the top dog breed searches in Australia all had five years of consitent google trends data. As this report looks at the remaining breeds in the top ten, two of the breeds had no data availabe and the other three breeds only had data for the last several years. No reliable trend could be found across the three breeds under analysis. Howeverd from what can be seen, and from the previous Australia dog breed trend graphs it appears that August is the peak month for people searching for the most popular dog breeds in Australia as well as around the Christmas period. It may be wise to purchase your dog breed in the lower deman months to have more choices.

In contrast, the US trends graphs for all breeds showed a good correlation and similar yearly trend. That is a decline from Januray to May, a rise to July, the strongest decline to October then an upswing to December finishing the year near unity. The Spoodle and the Yorshire breeds showed the worst end of year growth, both about minus 3%, while thie staffy and english bulldog were near unity. The cocker spaniel had a 4% annual search growth compared to the Google total market.

One point of interest is that while the global financial crisis began in 2008, its effects were not necessary widespread felt for another year or so.  You will see that the five year growth average for most breeds tends to be higher than for the 2009/ 2010 yearly growth.

The UK dog breed growth graphs had a much higher spread than the US, and this is partly to do with Google not having full five years of data for all UK dog breeds.  The UK cockapoo had the highest peak of plus 55% (only three years of data), while the lowest growth was shown by the Staffordshire bull terrier. Like the USA, the five year average annual growth values tended to be much higher than the 2009/ 2010 growth average.

This analysis is very useful in seeing the mid-term and short term online search trends of specific highly popular dog breeds in specific countries. As it has been found that there is a high correlation between a countries online search volumes for dogs and their real world ownership rates, it is also highly likely that high growth search rates for the most popular dogs (absolute search volumes) on Google will soon translate to real world ownership of those specific breeds. And of course if a dog breed is not already plentiful in society, a high search rate means that it will soon be more popular in real world ownership.