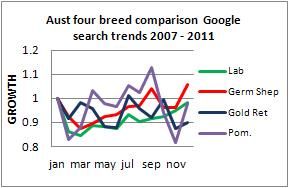 This report chronicles specific dog breed online popularity in leading dog ownership countries in the world. It concentrates on the last five years (up to August 2011) of online search popularity of the: Labrador, German shepherd, Pomeranian & Golden Retriever dog breeds.

However it is much more useful to see a longer term history of dog breed trends. To do this I have used Google trend data that compares online searches for any particular dog breed against the growth in searches of the whole online market over five years, 2007 to 2011.

In Australia in August 2011 the four most popular dog breeds in order were: Labrador, German shepherd, Pomeranian, a golden retriever. These also ranked highly in the USA and the UK. The question I originally considered was how popular have each of these breeds been in online searches in each country, and how do they compare with other breeds in that country. I also wondered if a specific breed’s popularity was correlated across different countries. For instance does media in America about a specific breed like the German shepherd affect purchase or online interest in that breed in other countries?

While I discuss this more thoroughly in the conclusion, it appears that each country has a strong correlation in search trends across all breeds analysed. Conversably, the correlation for a specific breed popularity trend (Jan to Dec) between countries is quite low

The graph below shows Google search data for five years (2007 to 2011) for the Labrador dog breed. While 2011 data is incomplete and weekly data is averaged into monthly data for clarity, it can be seen that there is a fairly strong monthly trend over the last five years for Labrador searches in Australia.

The peak months are Jan and December. After January there is a drop in search popularity of the Labrador of -15% then a steady climb back to near parity in December. While 2008 bucks the trend, there appears to be a mini peak in from June to July of +5%. 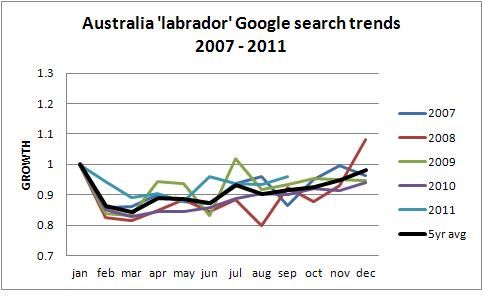 Firstly I will compare each of the four breeds (Labrador, German shepherd, Pomeranian, golden retriever) across Australia, USA and UK. While it may seem that there is some similarly in the monthly trends between the countries, later it will be seen that the popularity trend of a breed has more to do with the search habits within country than breed popularity between countries. All graphs are drawn on the same growth axis for easy direct comparison.

The Labrador was the most popular dog breed in Australia Google searches in August 2011, equal sixth in the USA and most popular in UK.

The graph below shows that the Labrador has had a relatively steady appeal across the months for each country. Australia and the USA have the most popular Labrador searches in January and December with a general lull in the middle of the year. The UK has a sharp rise in searches of +13% between June and August (summer months). All countries finish the year near-3% down on the start of the year. 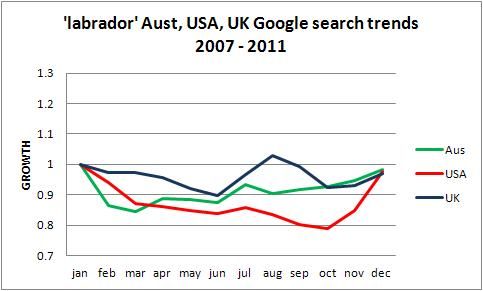 In august 2011 the german shepherd was the second most (82%) popular dog breed search on Google in Australia, most popular in USA, and equal second in UK.

For the German shepherd the search popularty trend of USA and the UK are most alike over the year. Australia’s trend shows an average drop of -13% between Janurary and March, then a contiunal clime until a peak in September (spring). Interestingly the search popularity then declines by almost -10% for October and November before a steep rise of +10% to December.

The significant diffenence between the labraodor trends and the german shepherd trends is that over five years the labrador trend growth remains slightly negative, while USA has on average risen +17%, Australia +6% and UK remains at parity when compared to the growth of all other google searches. 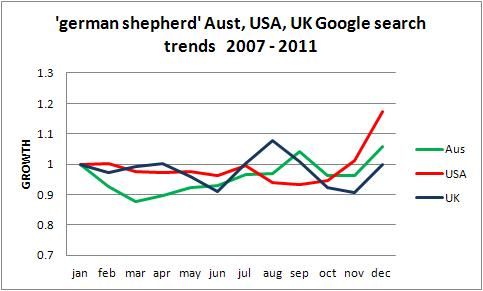 For the golden retriever the search popularty trends for Australia and USA are most alike. For Australia while there is a drop off of searches after Januray there is a mini peak in March, July and October. Overall the search trends for Australia fluctuate between partity (1) and -12%. While Australia and the USA are closest on the graph, the shapes of Australia and the UK are almost alike. This rules out any specific weather affect for purchase or interest in Golden retreivers since Australia and UK seasons are 180 degrees out of sync. The most obvious point of UK’s golden reteiver search trend is that it has a large peakup to +17% in August, while the USA experiences a large drop of over -15% in October.

At the end of the year USA and UK finish their growth at near +4% while Australia ends the year down -10%. This would suggest that while the golden retriever was the fouth most popular dog search in Australia in August 2011, its popularty may be on the wane in absolute ongoing terms. 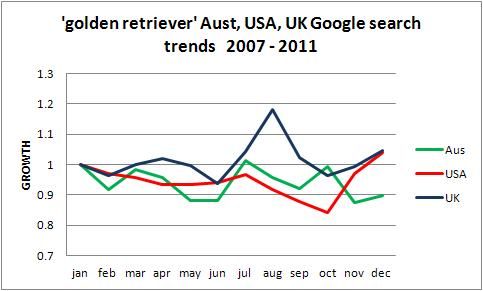 In august 2011 the pomeranian dog breed was the equal second most popular search in Australia, second in the USA and equal third in the UK. The pomeranian trend was the most complex of the four breeds with a very volatile search history in Austaralia. In Australia it experiencfed a fall in February of -17%, a rise between February and Apritl of +20%, a mini peak in July and a major peak in September of +12% above parity. It then finishes the year with a massive decline in searches between September and November of over -30%.

There is a slight corrlelation between Australia and the UK however the UK peaks are much higher than Australia. In absolute terms the UK pomeranian search results peak in April +14% and September +30%.

The USA trend fluctuates between -10% and +3% except for the massive saerch interest between October and December where it climbs from -11% to +16%. Overall, the highest yearly interest is shown in USA finishing the year +16%, +6% in the UK and -2% in Australia. 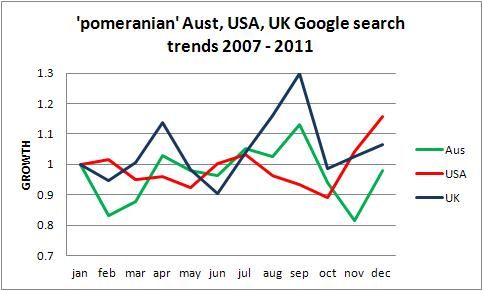 The graph below compares the four most popular dog breeds in Australia as ranked by Google searches. While there is considerably volatility throughout the year, it can be seen that several of the troughs coincide between the breeds as do several of the peaks. In general there is a significant drop of Google searches for the four dog breeds from January to February and often to March. There is a strong peak for the Pomeranian in April and a minor rise for the Labrador and German shepherd, while the golden retriever goes against this trend and searches fall. All breeds except for the golden retriever have a peak in July and a higher one in September.

In Australia there is generally a fall in interest for these breed searches in November before a rise for all breeds n December. It can be seen that over five years the golden retriever has averaged a yearly search decline of near -10% while the German shepherd has shown an increase of +6%. 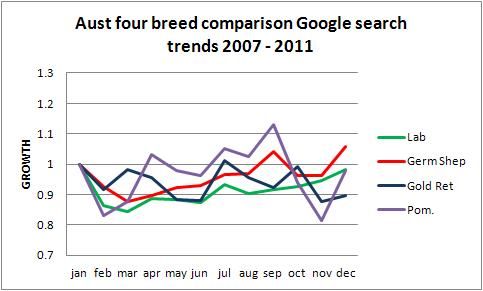 The search trends for these four breeds in the USA are HIGHLY correlated. All breeds show a steady decrease in searches until May then a mini peak in July. The majority of breeds then show the most pronounced drop in searches between July and October then a steady climb for two months to a yearly peak in December.

The highest growth breeds over five years are: German shepherd +17%, Pomeranian +16%, golden retriever +4% and the Labrador-3%. 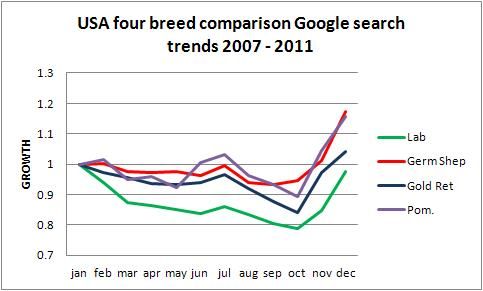 The UK shows the greatest correlation between dog breed popularity of the three countries. Each breed shows a decline of between -3% and -5% in February with a peak in April. The Pomeranian shows the highest peak in April of +14%. Then all breeds show a decline in search volume with a trough in June. ALL breeds then show a steady climb and a very pronounced peak in August (mid-summer) except the Pomeranian who has the largest peak of all breeds one month later in September of +30%. All breed then show a decline and a trough in October of near or below unity except for the golden retriever that has another slight decline in November at -10%.

The yearly search trends show that over five years the average growth against the market has been Pomeranian +7%, golden retriever +5%, German shepherd 0% and Labrador of -3%. 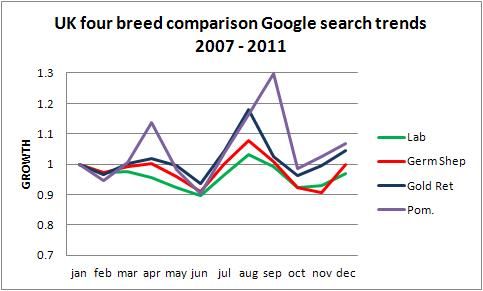 This dog breed analysis shows that there is a much higher correlation between specific dog breed online search trends within a country than for a specific breed across countries. These graphs are useful in seeing what the general popularity of dog breeds are globally as well as how a countries interest in dog breeds in general is performing.

The Australian graph shows that there is only a slight correlation between the search trends of the four most popular dog breeds in that country and that except for the German shepherd, that search volumes for the other three most popular dog breeds have been in decline over five years as compared to all market search trends. This is in keeping with the market reports for declining dog ownership in Australia over the last ten years.

The USA showed a high correlation between four popular dog breed trends with a general decline in search volumes from January except for a mini peak in July, then a decline to October and a rally at the end of the year. In fact the German shepherd and the Pomeranian in august 2011 were the two most searched dog breeds in the USA and over five years both these breeds experienced the highest average end of year search trend of around +15%. It looks like the future of these two breeds is assured in the USA.

in the USA while the golden retriever was the third most popular breed search in august 2011 it only registered a +4% average annual search increase (2007 to 2011) and the labrador at equal sixth most popular registered a five year average decline of -3% (similar to Australia’s Labradors negative search growth).

The UK was showed the most obvious correlation between all breeds. The UK annually experiences for all the four breeds analysed a peak in search interest around April and August/ September. Only the golden retriever and Pomeranian experienced a five year average positive search growth of around +5%.

If you want to see how your breed has performed in popularity over the last five or so years (since Google data is reliably available) this kind of analysis can be quite handy.