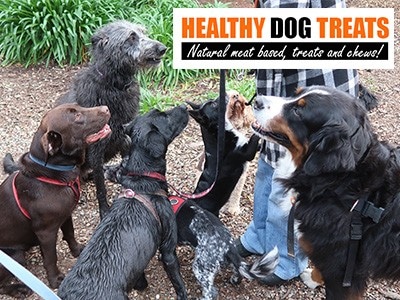 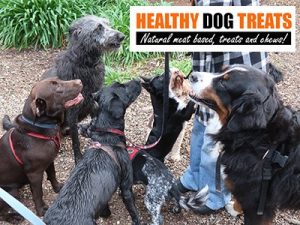 To understand globally and in Australia, what trends are driving dog food innovation (and dog treats by extension) we have found some very useful graphs from Analytic Signals group based on Facebook discussions and real-world sales between 2016 and end of 2018.

We will discuss the types of consumer discussion from Most discussed to lowest discussed. And what they mean from a Healthy Dog Treats and healthy dog food perspective for you and your dog.

This is the leading dog food topic from an online post (2016 to 2018) and overall discussion point of view. As a sub topic  (ie outside of generic or ‘Premium’ dog foods) –  it is also by far the highest in global sales.

Curiously, the ‘Grain free’ push was mostly born out of a movement that believed that Grains might be the cause of allergies in their dogs.  But it is noted that research articles often show that as many types of meat as grains and veggies are responsible for dog allergies.  Its just the dog’s immune system over reacting to the protein in the specific food. However before you go for a special hypo allergenic food, or grain free, you should note that dog food allergies (not intolerance) are relatively rare at below 5% of the dog population.

Some people also don’t like grains for their dogs, because they think they are just cheap filler. This happens to be true.

So, what is actually included in grain free dog food, this thing that has people shelling out a premium for their beloved dogs? Well typically it might be a small amount more meat, usually chicken or beef, because they are the cheapest farmed meats … and vegetable matter is substituted for the bulk of the grain. Often potato or sweet potato.

The fact is, if your dog has not been tested and confirmed for a specific dog food allergy, swapping to grain free dog food is just making manufacturers more money, not helping your dog a lot more.  If meat was substituted for all of the grain your dog would be much better off, but you would be paying at least twice as much per gram for that food. Grain free (when meat is not added) makes very little difference to a dog that is not allergic to a grain as far as a boost in health goes.

Is the second highest mentioned term over the previous two years, suggesting that there is a lot of ‘discussion’ about this topic. I feed my dog mostly a raw diet, but then again, I have done a lot of analysis, including specific amino acid content of the meats, offal and bones that I feed my dog, so I know that they are getting a much higher quality food than any commercial dog food.

However MANY people who do a home dog food diet, just feed their dogs one third meat, no offal or bones, and two thirds vegetable.  They don’t do proper analysis and the food is often far from whole and complete.

Homemade foods can be missing out on the calcium and phosphorous that they need, or getting too much calcium which is equally as bad. They probably don’t get the right amount or ratio of Omega 6 to Omega 3 and there is little difference between a dog eating two thirds vegetables in a home-based meal and two thirds vegetables or grain in a commercial dog food diet.

Yet, as a niche, RAW dog food products are the fifth highest sales niche, behind, grain free, high protein, all natural and limited ingredient.  What you are seeing is that the dog food companies are winning the battle about the misinformation they are putting out there about the dangers of raw feeding forcing people to buy kibble full of cheap vegetables. OR they are selling a RAW food mix that is still mostly not meat, essentially a cereal mix to accompany the mince that you buy.

We have written in detail in blogs on our site, about buying quality human grade meat, freezing in small batches etc can greatly minimise any risk of dangerous bacteria causing illness. But with the billions of sales and acquired vets spruiking the whole and balanced dog food stories written by the manufacturers, raw (meat based) dog food rarely stands a chance of gaining anything besides maybe a 5% share, years into the future.

That is why using safely cooked and dried meat-based dog treats are a perfect supplement to commercial dog food.

– is the third highest discussed term on social media.

‘Snack’ is a humanised term for dog treats or other variations. The problem with this whole territory is that dog food companies own many of the category killer brands in dog treats, and those dog treats are even less healthy for dogs than the commercial dog foods. That is they often contain less meat, and have added sugar and salt etc.

With leading dog food companies, discrediting raw meat, they have focussed the main ‘snack’ mentions to be about feeding dogs snacks made of non-meat products like: raw carrots, celery or peanut butter. Ironic considering adding a meat-based snack is the only way to address the lack of meat in dog food. A GREAT opportunity missed.

These terms essentially mean VET recommended or available via vet only.

Because impartial media is rare, and the most you are likely to hear from a vet is when they are sponsored to sell a leading dog food premium product … they are not going to spend much time discussing a dog’s meat protein needs.

‘Professionally recommended’ can also be code for ‘prescription based’ which is a niche that dog food companies invented, with a nod from vets, that require owners to get permission from vets to buy the dog food. It’s a perfect profit closed loop, resulting in food that typically has no more meat in it than regular commercial dog food.

Professionally recommended dog foods may have trace elements of chemicals that are supposed to assist a dog with issues like kidney disease etc, but the doses are no where near what a sick dog would require to be well, so they are of little value (considering the higher cost you pay).

In the commercial dog food realm, this means rather than having the thirty or forty ingredients, meant to impress the consumer, just like the 30 or 40 ingredients on human shampoo bottle labels, there are only a few ingredients.

The reason that dog food companies have added so many ingredients in typical dog food, is that at the end of the ingredient list it can be stacked with many trace amounts of impressive human foods but in tiny amounts (eg blueberries).  This means these foods can then be shown on the glossy dog food label to increase sales.

Limited ingredient dog food (and treats) was a reversal to this trend, a back lash by well-meaning owners thinking that reducing the ingredients of the dog food to maybe five ingredients would make for a much more healthy dog food. The issue still is that with ingredient splitting on labels, manufacturers still make it seem like meat is the overwhelming highest percentage ingredient, but grains and vegetable matter coming in as ingredient 3 to 6, often outweigh the actual meat content. Limited ingredient has NO relation to the percentage of DRIED quality meat included in the dog food.

We believe strongly in TRUE limited ingredient dog foods – but they aren’t a patch on what we sell, which is typically SINGLE ingredient MEAT and OFFAL treats.  That is when you truly know what you are getting. And you can then easily understand that you are adding actually MORE meat to your dog’s diet, not just wishful thinking.

This is basically what we sell in healthy dog treats.

And remarkably it’s the second highest selling niche segment of dog food (but still about only half the sales of Grain free dog food).

But here in lies the issue.  “All natural” Should mean what wolves and wild dogs would eat, if they are free to catch their own food in packs. It is NOT grain or vegetable based.  Vegetables and berries are eaten if wild dogs are sick or are unable to catch their food (often due to illness or lack of prey in their area). The sugar of berries goes down a treat, and it helps them survive, but not thrive.

All natural would actually be RAW in the perfect dog food world, but RAW has too much food manufacturers scariness attached to it, so that is why ratio of sales of NATURAL to RAW products sells at two to one.

All natural then usually translates (if you are lucky) to just less additives and colourings. Things that are actually a tiny percentage of the included ingredients by weight , and don’t make anywhere near the difference such as adding 30% more meat to a dogs diet. But again, the word NATURAL in commercial dog food and treats is what they want you to believe, not what is actually in the dog food packs

This is the basis of healthy dog treats that we sell. But deceptively High protein does not mean MEAT protein. Which is really all you want.

If you look at our last article on  Super premium dog food trends ,  “https://www.healthydogtreats.com.au/super-premium-dog-treats/”  you will see that super premium is positioned to have people think that they are buying HIGH PROTEIN, but tricks in wording mean that High meat content (which can be the wet weight) are often low in total Dried meat amounts.

Likewise, high protein dog food can mean just High protein grains, not meat. We have also written an article about highly processed and condensed livestock food a company was experimenting with to sell as vegan dog food – NO MEAT whatsoever.  Meat is bio available, and genuinely natural amino acids that a dog’s digestion and wellbeing, it is geared to extract nutrition from.  High protein does not mean high meat quantity (dried meat percentage) or quality meat inclusion. It might not even mean ANY MEAT is included!

We recommend either buying ‘HIGH PROTEIN’, from a reputable company that states the percentage of DRIED meat inclusion. Or you consider buying meat based dog treats where you can actually see the single piece meat grain. Not TVP products they use in wet dog food to make you think you are buying meat (but you are actually getting a tin of soy).

We have written whole blogs on the following topics of Organic, Home made and Vegan dog foods –

If you want value for money, consider our DRIED organic range of Kangaroo or fish (caught in Australia) or NZ (green lipped mussels.