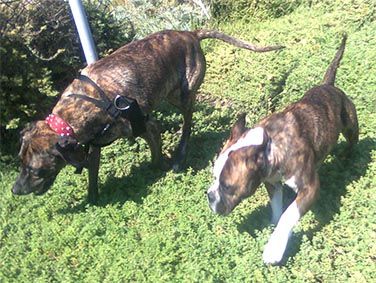 This is the story of Archie, blitz and Jack and Jill. Archie is a four year old spoodle/ cockapoo. Because he is my dog he typically gets two walks per day, and a healthy raw meat diet. This makes him healthy and social.

Blitz is a 12 year old ridge backcross that when I was first introduced to him had many anti social problems. Much of this was caused by his recent change in environment. After spending three years on a farm where he had plenty of space and solitude, owner circumstances changed and he had to live back in an urban environment with a small yard.

The owners difficulty of taking such a big strong dog for regular walks meant that he was eventually chained up, and under vet recommendations was heavily medicated each day.

When a dog is not walked or allowed to be social regularly with its own kind, it will become bored and destructive. It will become less healthy and anti social, and this is the space that I found blitz in. On the first meeting, he was acting very tense and dominant in a very aggressive way to my dog and I was not sure if he was the kind of client that we could take on. I always consider the safety of my own dog and others.

After a few months of two walks per week, Blitz completely mellowed and his only issue continued to be a tendency to wander and scare other people. This was simply because of his size and desire to bound up to them.

Flash forward a year, and a new client called me to get her two aussie bulldogs walked. These two dogs named Jack and Jill were very cute, but very high energy and also destructive. You can tell how often a dog gets walked by the piles of excrement in their yard, and that they have torn all the grass up from not having an outlet for their energy.

The problem for these two dogs, like blitz earlier, is that they are not ‘cute small fuzzy dogs’ that everyone will tolerate and like at the cafe. These kinds of dogs come with all kinds of pre conceptions. While smallish, they have incredible strength, patricianly after being locked up for so long.

This article is a companion piece to the video I shot of the dogs playing at the local waterhole. It is only a tiny fraction of a display of the energy that they all possess, since it was shot at the very end of an hour off lead walk.

What you will notice throughout the video is the bulldog wanting to play with blitz and in particular after the three minute mark, you will see them gang up on the ridgeback and jump all over him. This is acceptable from puppies, and indeed older dogs give puppies and very senior dogs a lot of latitude in how they play or engage with them, but since these two young dogs were so strong, and have the potential for causing harm,  blitz didn’t feel like tolerating it.

The amazing thing to his credit is that he just ran off and let them burn their energy out. Bltiz could have easily snapped back at any stage, but he is so mellow and social now, he knows that he doesn’t have to fear bite.

Another video that I created of them playing in the same swampy water shows my dog Archie at the end of the video deciding to tell one of the bulldogs off, in an incredibly social way. What he is seen doing is asserting his status in the pack and also protecting blitz.

In the video we see dogs having fun in a natural off lead environment. Burning off energy and learning where they sit in the pack.

It shows the remarkable social and dynamic bonds that are created between dogs in a regular pack, even if they only come together to play once or twice a week.

If you are interested in daily dog pictures, or healthy dog treat specials, Join us on http://www.facebook.com/HealthyDogTreatsShop