HEALTHY DOG TREATSBlogBlogWhat causes dog ear infections? Why are they worse in Summer? And why do Oodles get so many!?!

What causes dog ear infections? Why are they worse in Summer? And why do Oodles get so many!?! 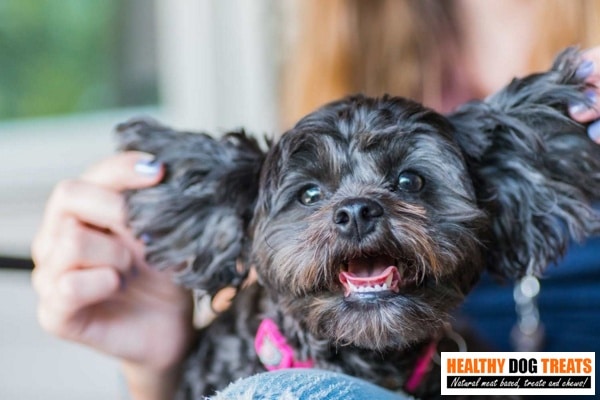 Ear infections in dogs can be caused by a variety of sources, but it is often mostly allergies, autoimmune diseases and actual objects, such as grass, wood chips or insects, being stuck in the ear that you can actually prevent.

The other, less common, causes are hormone imbalances or defects in the middle ear.

For the first four years of our beloved spoodle Archie’s life, he was highly reactive to the grass at our local park.  The following explanation gives you a glimpse of one of the most common issues of all.

“Skin allergies bring inflammation to the surface of the body which causes irritation and warmth. The confined space of the ear canal breeds yeast and bacterial growth that further increases the inflammation,” Ref 1

But this is only half the story.  It’s the positive feedback loop that is the greatest cause for concern in reducing the frequency of ear infections.

As dogs roam off lead at the local park, they can gain significant contact allergies with the many random grasses in the park.    The issue with walking on the grass or breathing in the pollen is that a dog’s body, much like a human’s body, reacts to the ‘threat’, and if they are highly sensitive can begin producing far too many histamines in response to the perceived threat.

In high humidity climates (like most of Australia over the last few months), or after swimming, dogs’ ear canals effectively become very humid little caves perfect for fostering fungal and bacteria populations.

Often, in dry parks, dogs will get super itch in-between their paw pads.

When you see your dog incessantly biting and tugging in-between the pads, they are just trying to reduce that itch, but the saliva they add is actually helping to grow natural foot fungal populations that then turns into ‘athlete’s foot’ and makes the licking behavior become chronic.

The positive feedback loop of being itchy, then adding saliva, then increasing fungal itch, then more licking is what then invites bacterial populations to rise too.

The dog’s body’s white blood cells flock to the now irritated and often red inflamed skin in the pads, and the histamines levels keep rising.  But as a side effect, ANY fungal population in the ear is also likely to increase. This is because all your dog’s defenses have been poured into protecting their feet, leaving their very sensitive ears exposed to attack.

And YES, it is true that dogs have very few sweat glands compared to humans (hence why they easily overheat in hot weather) – but they do have sweat glands in their feet and inner ears! Making it a perfect storm for ear infections if the ear canals are closed over by a floppy ear and humid conditions.

So Many Oodles, So Many Ear Infections! 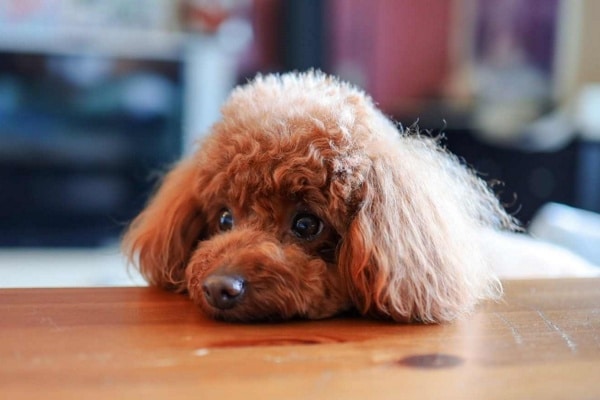 It takes very little for dogs with floppy ears, such as Labradoodles, Spoodles, Cavoodles, and Groodles to increase that fungal population into a full-blown allergic reaction. The ears become inflamed, the fungal population and bacteria often can increase and your dog to have a runaway infection that is often only treatable with high potency medications such as non-steroidal cortisones.

And here is where oodles create that perfect storm:

1   Oodles have half of their lineage from poodles, who are known for having sensitive skin and are prone to ear infections.

2  Poodles have an ever-growing coat, meaning that it’s up to the diligence of owners to regularly shave their dogs down or wash them.

MANY owners do not do this weekly or even monthly, meaning that dirt and debris can get trapped in the dog’s paws. This combined with a long warm coat in summer means that they will have a higher sweat propensity (concentrated in feet and ears), which creates the perfect environment for fungal and bacterial infection in the ear.

If owners do not shave the side of the face regularly (in-between major grooms), and have the hair in the air plucked, this closes the air gap, so lack of dry air circulation to the ear canal increases humidity.

We have been told by several vets that Archie had one of the strongest hair coats (making it very hard to pluck ear hair) – and a more right-angle ear canal than many breeds, meaning that it traps water more efficiently. 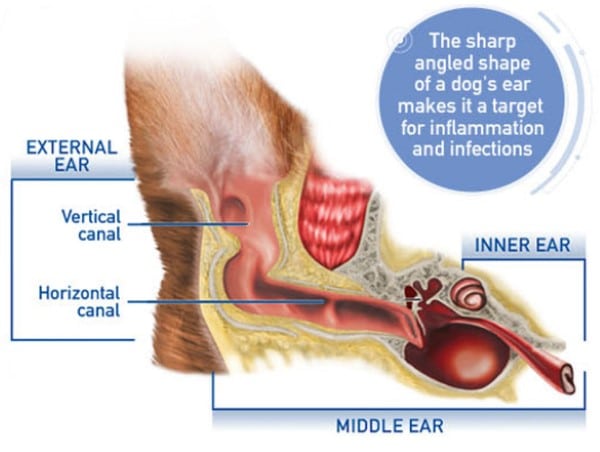 Signs of dog ear infection to look out for…

Your darling dog will often scratch at their ear, shake their head from side to side, or rub their head on the ground. Dogs with a foot fungal infection will also often have darker coloured fur where the saliva has discoloured it. If not treated, ear infection can cause a lot of pain, a lot of medications that can lower their immunity while being treated, or even cause deafness as the inner ear becomes damaged.

What can be done to prevent dog ear infections?

1   Exercise off lead is vital to any dogs physical and mental health. It also keeps their systems running well and is worth any grass reaction that they might have.

2   Keeping your dog’s coat short, shaving the space between the head and the floppy ear and managing ear hair (removing from the canal), are ALL important maintenance for a dog to maintain a healthy ear environment.

3  Diet Considerations. Oodles also have a high propensity to get skin allergies from processed dog food. The addition of colouring, additives and preservatives can increase stomach and intestinal irritations, again overwhelming the dog’s defense systems, and allowing fungal populations to take over.

It is likely that the massive dilution of meat in a dog’s diet (through eating commercial dog food with high vegetable matter content), doesn’t help allergies or getting the nutrition your dog needs.

Think carefully about the choices you make with dog food and where possible avoid the ingredients any grain based foods that are known to increase allergy responses.

4  Supplements. This is one of the simplest things you can do for your dog. Adding the appropriate amount of Omega 3 fish oil to your dog’s DAILY diet will go a LONG way to preventing ear issues.

Omega 3 supplements (from animal sources only) have worked a miracle for the last 10 years with our dog Archie, going from an average of 3+ visits a year to the vet for major cortisone treatment, to only a few times over the following ten years.

We have extensive articles on Omega 3 as a ‘miracle supplement’ on our site, but essentially this is what it does. Besides the value to a dog’s brain and heart once it has sorted out all the internal deficiencies, it can concentrate on providing a healthy skin barrier for your dog (prevents bad fungal and bacterial populations flourishing).

DRY skin, i.e. lack of natural dog oil for whatever reason, helps fungus make a home on your dog in the first place. Omega 3 is the most natural (along with appropriate amounts of Omega 6) oil used to prevent major dog ear infections (caused by allergy reactions mentioned above).

5 Medical shampoo. If your oodle is very prone to foot licking or ear infections, weekly shampooing with a medical shampoo like Malaseb can be of GREAT value. It has active anti-fungal and antibacterial chemicals in it – but you have to leave it in for 10 minutes to do its job. Also ensure that you use a good conditioner afterwards to replenish the skin.

We also suggest (as many vets have told us), to dilute it to 5% in water and rub it in-between their toes and pads several times a week during peak grass flowering seasons. Again, you need to leave it in for 10 minutes and pad it the area dry afterwards.

We suggest adding omega 3 fish oil via capsules to your dog, but not everyone has the time or desire to do so.  If you didn’t know it already, many FISH and all kangaroo products have a high level of Omega 3 (naturally) in their bodies.

By using species with high Omega 3 levels, and SINGLE INGREDIENT dog treats (without colour, additive or preservative, that can trigger food allergies) you are going a long way to assisting your dog’s already compromised immune system.

Three FISH based SINGLE INGREDIENT DOG treats that we recommend highly are Flake Fillets, Hoki (Blue Grenadier) and Salmon Skins particularly for small and medium dogs (as they are super easy to eat), and provide great nutrition too.

Also, the addition of single ingredient meat-based dog treats, are providing much needed meat proteins that they might not be getting enough of in their regular commercial dog food.

We understand that most people use canned, or pellet food and we are not here to persuade you otherwise.  But we do strongly recommend, if you have an Oodle or any dog prone to ear infections, that along with the other measures, you choose single ingredient fish treats or kangaroo dog treats (also high in Omega 3), as an extra weapon in your arsenal against ear infections in your beloved pet. 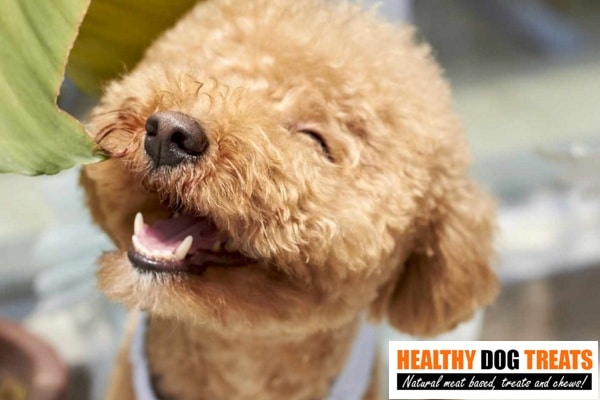