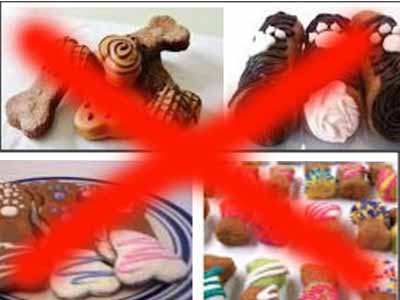 Usually a company doesn’t like comparing products on other people’s sites to real food, but sometimes you have to take exception to the wisdom of Google. (now a money maker, no longer the finder of truth). On the first page of Google Gourmet dog treat searches, we find FOUR pictures of DOG TREATS that they claim to be Gourmet.

Gourmet dog treats might mean fancy, expensive or even colourful, but it doesn’t mean that it’s not natural and healthy.

It is true that I sell bulk biscuits on this site, and some people love them for their dogs every day. But our biscuits tend to have real nautral ingredients added to make their flavour. However calling a product GOURMET that is essentially grain based (other than regular dog food) is a massive stretch of the truth.

Maybe its only people who dress their dogs up in doll clothing and never take them for a walk. Make them only socialise with people within four walls of their own house that buy these treats? But I suspect the lure of Google putting these treats up as GOURMET  gives them some remarkable power to fool the average person.

The big tip for dog food or dog treats, are that if it looks unnatural, if it looks like it is NOT meat based, then it is not actually good for a dog in any sizeable quantity. Some of blackdog products have natural human grade food dyes (like the beef liver balls being BLACK) because consumers are convinced that the word liver has to mean black.  However they don’t do it to fool owners or dogs, or to get the best advertising exposure. it is a minor tweak, not the major ingredient.

Real dog food is meat based, and real dog treats, gourmet or plain, are animal based.  They are at least 80% meat based and something that a dog would eat in the wild, even if the dog has never seen outside its living room. Because its digestive system is still the same as the wolf. That is something that never evolved to eat cheap grains just to make human companies profitable.

If a dog treat looks more like a human biscuit or cake treat you would find on Ackland Street in St Kilda Melbourne, then you know you have just been sold a lie.  Just because it appeals visually to a human should NOT mean that it is good or desirable to give it to a dog.

I always believe that wether I am feeding my dog ‘dog food’ main meal, or feeding my dog a dog treat, that it should genuinely be good for them. And the plain fact of life is often the more natural/ scary (to a vegan) it looks, the more likely it came from an animal and is the MOST GOURMET dog treat they will ever eat in their life.

How is that possible?  Simply because gourmet means something unique and special, and in this world of pretender wheat based dog treats dressed up as GOURMET, a meat based dog treat is a pretty rare thing, and actually GOURMET by definition (rare).

Blog
Comments for this post are closed.
Previous reading
What do healthy dog treats look like and smell like?
Next reading
What’s all the buzz about Fish & shark based dog treats?