HEALTHY DOG TREATSBlogBlogDog Territory Marking, Why do they do it? Why does Archie cover up Mac. VIDEO

Dog Territory Marking, Why do they do it? Why does Archie cover up Mac. VIDEO 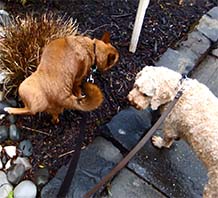 This video was taken on a rainy winters day in Melbourne. Mac is an irregular dog sit client of mine and is a corgi cross rescue dog. He has had many years with his forever owners however some habits die hard.

The habit I am referring to is his need to mark every possible threat in his territory with his scent. Having seen Mac in action on many walks I thought it would be interesting to see how many times he would try his marking in a one block walk.

A bonus feature to this video is that I have speeded it up in-between peeing sessions, and you will see that Archie has worked out that it is much better to go second on the really good pee spots.

What is dog territory marking

Cesar Milan wrote a major article on dog territorial marking and how to stop it.

The reason he says dog mark territory is out of insecurity, and the concern is that if a dog does it outside frequently, it may try it inside your house.

Mac is already neutered, so that recommendation can be checked off.

Territorial marking around the home is due to an anxiety a dog has about a new dog or person usually. They see the person as a rival in the pack and want to cleanly mark their space. Cesar recommends allowing the person or dogs to bond with the insecure dog to reduce the frequency of territory marking.

They also say that “Dogs crave rules, boundaries and limitations. It is not a good idea to allow your dog to roam all over the house, sit on furniture, eat from the table, or engage in any other type of disruptive behaviour.”

The funny thing is that Mac is well disciplined, is walked regularly, and when the owners go out, is relegated to the kitchen area of the house.

What I can tell you is that Mac does have food guarding issues (and is on a strict diet, because he has had leg issues that extra weight would only exacerbate). And he often initially snaps at my very social dog when I bring him along for a walk – which clearly is not social behaviour.

But the rules and boundary things Mac seems to have plenty of. So the question may not be about how Mac is being treated now, as much as how the corgi breed is known to be a little ‘off standish’ , and that this rescue dog may be dealing with issues that go back to when he was a puppy or how his previous owners treated him.

In the video you will note that mostly Mac seeks out a scent to apply his scent over, then half the time my dog Archie applies over the top of that scent. Only a couple of times does Mac remark a second time where Archie has remarked. Archie does not remark his scent over a second Mac marking.

Archie is a social dog and a dominant dog, however on solo on lead walks or on-lead walks with other dogs – he doesnt mark territory very frequently. Clearly Mac’s excessive marking is telling Archie that  Archie better mark over Macs markings or Mac will be above him in the pack.

How does marking territory differ between dogs and cats

Marking territory is also an interesting phenonomen when compared to domestic cats. Most cats are fastidious about covering up their poop, and mostly only dominant male cats like to excessively mark territory inside of the house. 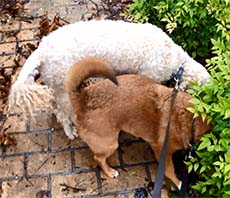 Dogs however make a hap hazard attempt to cover their faeces, and many behaviourists suggest that they are not covering it at all. In fact rather than kick dirt over the poo to hide the scent from predators, they seem to be leaving a calling card and just marking the ground near their poo so that other dogs know that they are in the territory and to stay clear of them.

Marking territory (peeing) is usually done to alert dogs to a claim of that territory. Dogs cock their leg to spray onto a vertical surface so that in the rain the urine and scent will not be as easily washed off. If  a dog isn’t worried so much about marking territory, whether it be a male or female dog, they may just squat to pee.

You will notice that an anxious or highly scared dog rarely poos and definitely does not proudly mark their territory with urine. They don’t want to be seen or known to be in the area.

I think just watching this video alone to see the effort that Mac goes to in finding the perfect spot to pee, and how fastidious Archie is in getting the right angle to pee over the top of Mac’s handy work is worth the view alone.

Any guesses at how many times Mac pees in one block?

Join our FREE HEALTHY DOG TREATS Newsletter for Discount COUPONS. (use rego form top LEFT of this site) If you would like to view the world of a dog walker and get healthy dog treat specials then please LIKE HDT on Facebook
Blog

Previous reading
Flex, the great Malinois Belgium Shepherd retrieving at Quarantine – VIDEO
Next reading
The local pub, and why you should buy a healthy smacko dog treats?