HEALTHY DOG TREATSBlogBlogkangaroo dog treats like roo jerky are tasty and healthy too!

kangaroo dog treats like roo jerky are tasty and healthy too! 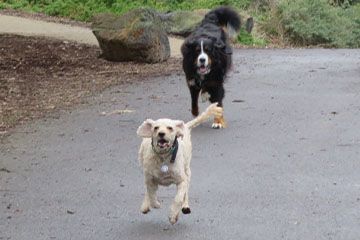 Why are roo dog treats THAT good?

I recently had one of my clients as for me to get her some wacko treats.  She is not the only one that calls all treats whackos – funny what a few million in advertising dollars will do for a multi-national.

Even funnier was her inability to describe what shape and colour she thought the treats her dog liked were. I knew what treats she was after, but she swore that my recommendations this time were inaccurate so we went for ones that she tried a year previously that I think her dog soon gave up on.

You see even with having the best meat based healthy dog treats in Australia, every dog is different.

Dog food manufacturers follow the script that their research department gave them and hasten to tell you that you must feed your dog the same grain diet for every year of its life, as changing will make them sick, give them the runs etc.

Funny how wild dogs can eat all sorts of recently and long dead meat off the forest floor and not get particularly sick, but I digress.

The whole point of making you stick with one bland taste is that it narrows the dog’s mind as to what it likes and it narrows its tastebuds through atrophy so there are only a few flavours that it recognises and likes. This is a great way of ensuring a dog stays on your bland pellets with added tasty oil for life, but is of negative health impact to a dog that needs a lot of meat protein to properly function.

Anyway, I gave my client the treats she asked for and her dog only ate half of them with diminished enthusiasm. They were still 80% meat based, but not in the exact formula that would set this terriers taste buds on fire.

Turns out that just like my dog, this dog loves roo jerky (and even beef jerky). But this dog already has some beef included in its pellet meals so kangaroo is a better choice. It loves to shred the meat apart as it holds it in its feet and it loves the stinky meat smell. It loves the bioavailable amino acids (well its body does) AND it will often pick these 100% meat treats over sugar and salt fillet fake treats designed to make it go wacko.

Of course you can’t trademark a straight meat dog treat, so the major players don’t wont to get into that market and have a price war. Their business is marketing and advertising and making sure you buy their brand (what’s inside the wrapper is of no consequence). Or that is what they have relied upon until now.

Suffice to say this week this lady’s dog got 100% meat treats again, and her dog was the happiest dog in Melbourne!

Blog
Comments for this post are closed.
Previous reading
black dog treats and the story behind their great range
Next reading
Homemade dog treats seem like a good time consuming idea