Why Jerky Treats for dogs is the #1 Global dog treat term.

From Feb to May 2020 (90 days) “Jerky Treats for dogs” was by far the leading GLOBAL ‘dog treat related’ search query on google.  In fact, it had a 250% increase in search volume over this time.

The relative importance that this term had in the major countries that dog owners searched for it were:

This is an amazing if not a LOT unexpected, considering the amount of HUMAN press around about everything being PLANT based is receiving from companies making money out of this cheaper food lately.

Yes, plants are good for humans to eat. But most humans also agree that their omnivore nature requires some balance of animal product as well.

We have strongly advocated for a about TEN years that dogs carnivore based digestive system and hunting methods, makes then a MEAT based predator, that should have the majority of their food ANIMAL based, not plant.

The heartening information that people, globally including AUSTRALIA, are searching for the term “jerky treats for dogs” is that JERKY is currently exclusively a term related to animal meat treats.  No doubt it will eventually be subverted by the vegetarian and vegan human renegade groups.  But currently it remains as it should, to describe dried MEAT based food. 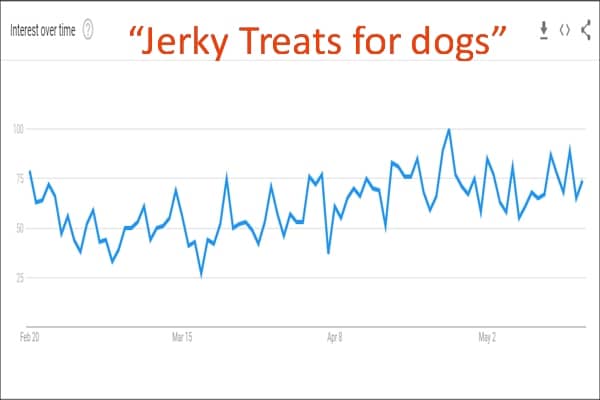 WHY jerky treats are DOG FOOD and not just DOG TREATS

Dog food should mean, what is most appropriate for domestic dogs to eat.  IT should therefore be meat based. It should be composed exclusively what dogs and their ancestors would hunt and eat. Sure they might eat a small amount of plant matter from grasses or accidentally consumed from the stomach of prey along with the main meal – the animal stomach lining.

BUT in general, it is the ANIMAL, and not the plants that the animal may have grazed on that sustains a dog.

It just so happens that WE sell meat based jerkies which globally have fallen into the TREAT category, whereas in reality our treats, and the jerkies at least, are mostly 100% dried meat (with no additives) compared to dog food that might be 30-40% low quality meat at best in “dog food”

The main meats we have are Roo Jerky (small and big pieces), beef jerky, Chicken Jerky (mostly Chicken breast with small amount of soy for a better texture), and numerous FISH jerkies (flake and Hoki, squid)  and fish skins –  all 100%.

Jerky implies that it is mostly a single cut of meat dried and hence you see a grain and a dog will have to tear and rip the meat apart, as their teeth were evolved to do. This provides a sense of accomplishment at putting some effort into eating their food, rather than the ‘dumbed down’, easy to fall apart pellets that make up most dried dog food.

This means that Jerkies are an occupier treat for small and medium dogs, and a great nutrition boost (animal proteins that are very easy for a carnivore to digest) for all dogs.

Blog
Comments for this post are closed.
Previous reading
Important Lessons in dog food from a Lassie film.
Next reading
Can dogs eat fish skin, sure they can, here are the benefits.