Important Lessons in dog food from a Lassie film. 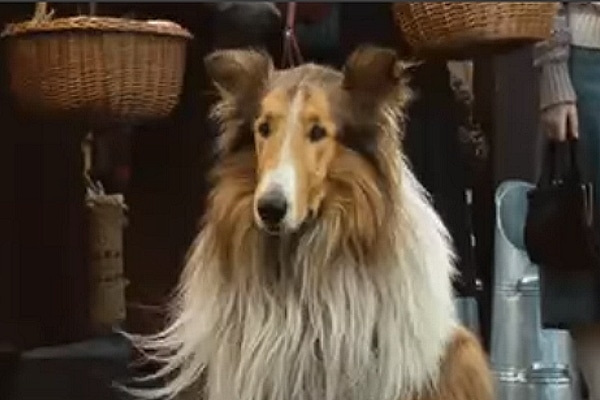 As a self-taught dog nutritionist, I marvel at the bad habits and foods propagated in Hollywood films.  The writers are mostly middle-class Americans, so its kind of a ‘pub-test knowledge’ of current thinking there and in Australia.

The latest Lassie film that we watched on Netflix was made in 2005 but based in the time of WW2 in the UK.  The plot has Lassie dog break free from her rich new owner at the top of the UK and she then makes her way back to the middle of the UK via a very scenic tour of the countryside.

She even catches up with wit Peter Dinklage, the local gypsy.

Here are the interesting things learned about writer’s lack of understanding of dog nutrition and probably the UK people of the time.

What is dog food?

When the rich man first acquires Lassie for his granddaughter, one of the ‘dog handlers’ suggests that the reason that the pining dog isn’t eating is that it was probably fed low quality “table scraps” from the poor family that used to own it.

It was never fully articulated what the rich people were going to feed their dog, but it is possible that they would have fed their dog mostly MEAT.  This is because they lived on a big estate and regularly went fox hunting with big packs of beagles and tracking dogs.  Back in the day, in the UK at least., a lot of owners in the know, realized that their dogs (carnivore) did best on whole animal meal diets (ie meat, offal and bones), perhaps getting rabbit and the like regularly.

‘Table scraps’ would be fine for dogs if they most included lean meat, but during the wartime, meat was a scarce resource, particularly among the working class. So it is likely that any dogs fed table scraps would mostly get broth, some veggies and the fat off the meat if anything – hence their potentially poor condition.

That said, many dogs were not on leash I the film and would have done some good off lead walks with their owners … balancing up their health somewhat.

What gypsies fed their dogs.

Well it was actually Peter Dinklage as a travelling puppeteer in a covered wagon, but you get the idea. He loved his own small dog, so welcomed a stray Lassie onto the fold when he met her on the road. He threw something that looked like a small piece of breed at Lassie the first time to lure her over. The future real meal Lassie was given is what was most telling.

It is likely that he was not a rich traveler but was willing to share his food with Lassie and his own dog as much as he could. At one stage in the film he eventually encourages Lassie to eat what looks his left over veggie soup (carrots and some green in a light broth) .. but the writer has Dinklage make the observation that the reason Lassie wouldn’t eat food off the road was that she was a classy kind of city dog that would not eat off the road, but required it to be in a bowl before she would eat.

If you have ever dropped meat on the floor of your kitchen, I am pretty sure that it doesn’t need to be in a bowl for your dog to eat it. Dogs are by nature scavengers, as like wolves they eat what they can to survive. But given preference to hunt and kill and eat meat, that is all that they would do.

In actuality it is more likely the rough way that Lassie had been treated previously by bad people trying to catch her, means Lassies reticence to eat food from a stranger was more likely her being sensible in trying to avoid being poisoned.

It is true that just natural veggies (no grain) can sustain a dog for a while. But if affco is to be believed, (the dog food standard dog food is sold by in Australia), then you would realize that NO combination of natural vegetables (not highly refined and condensed unnatural plant foods) can get anywhere near the minimum level of protein requirement for dogs (the very low 18% protein for a maintenance diet), let alone what is required for puppies or pregnant dogs.

Commercial dog food (pellets solid in Australia) are vegetable based, but the manufactures are forced to put meat in it, to reach the minimum protein requirement. They are also forced to put in high levels of vitamin and minerals (unnaturally high levels) – so that aafco can force a natural animal based diet as inadequate too,

Why the dog food in the film is fiction

It was a lovely ‘family story’, and Lassie was made out to be a saint, but she was kept mostly inside in a coal miner’ small cottage. At one point when she has been starving on the road for a while already and seems to have survived mostly on drinking fresh water from streams, we didn’t see her eat once from nature on the field.

Her collie breed originated in Scotland for herding purposes, but that was mainly sheep and cattle. I was amazed how a starving dog, so calmly ran past a whole flock of chickens without hesitation!  That would probably not be true starving dog behaviour (particularly ones that had not grown up with chickens as their friends).

What medicine do you give a dying dog?

Perhaps it was the norm back around 1940’s in the UK, but I am a little puzzled that the vets only suggestion for a dog dying from ‘exhaustion’ should be given warm milk with brandy.

Firstly, I know a few companies that made their fortune from providing lactose free milk for dogs! Yes, I know that people love to give cats and some dogs a milk drink. But I have heard that these pets are even more susceptible to lactose intolerance than many humans.

The secondary issue of course is that you should never give alcohol to a dog for any reason. And in particular this was suggested just after the vet listened to Lassies heart and said how weak the beat was. Giving a dog a depressant that is essentially poisonous, when it has a weak heart and is exhausted is the LAST thing it should have. And fortunately, the dog’s owners couldn’t find the brandy.

While it is true that Lassie is not a healthy dog documentary, it appears that little has changed from war time feeding to current practices.

Back then, only the rich owners could afford to give their dog whole animals or good cuts of meat. The poor owners would have done the same, knowing that dogs did best on meat, but they had trouble enough surviving themselves.

Post war as economic situations improved for the masses and the middle class grew, people could afford to feed their dogs more meat, but there was also a massive marketing and branding boom in society with the advent of colour TV. And nothing would stop any company making anything for a profit, and the consumers buying it up. That is the inception of cheap grain in pellets that was sold as dog food to the masses. A non-messy solution that would free up owner’s time from preparing truly nutritious dog meals.

Unfortunately, it seems that things have come full circle in the 2000’s back to the 1940’s dog food situation.

Not only have people forgotten that dog’s evolved from wolves and still have the wolf digestive system, but dog food companies have been so good at advertising for the last 70 years telling us to feed our dog wheat biscuits and grain pellets, and celebrity (well sponsored vets) do the same, that feeding dogs an almost herbivore diet is most commonplace, not the outlier.

And with the cost of meat is getting out of control in Australia due to droughts and export drives, it’s so easy for people to forget the basic need for dogs to have a meat-based diet.

You don’t need to own a Collie dog to know that it needs more meat than it is getting in most commercial dog food diets.

Blog
Comments for this post are closed.
Previous reading
DOG FOOD: The Top 10 Best Puppy and senior age food TRUTHS
Next reading
Why Jerky Treats for dogs is the #1 Global dog treat term.