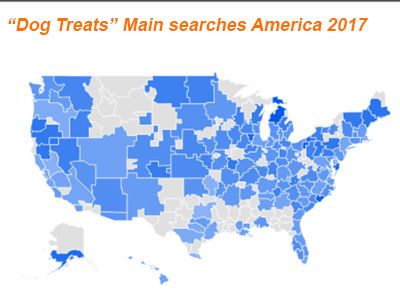 In this article we look at what people might perceive as the difference between healthy dog treats, natural dog treats, organic dog treats Australia and more generic offerings when searching on Google in America.

And we then extrapolate that to the reasons dog treat shoppers have in Australia.

As you will see from the first map,  the whole of the American map is lit up for METRO regions looking for generic “Dog Treats” but when it comes to healthy or natural version, people are much pickier.

We use American Google trend data because Google Australia doesn’t provide this data down to this level for us to see.

We are using Google metro trends to see WHERE people in America are searching for their SPECIFIC NICHE dog treats and what conclusions can be drawn.

The table below shows the most searched metro American regions for July 2016 to June 2017 for each dog treat niche.

The previous articles shows that the political persuasion of the majority of the people in the leading American metro ‘healthy dog treats’ search areas were in Democrats counties.

The theory was that they are more progressive in thinking and are actively looking at health solutions beyond what their dog food or vets can provide.

BELOW are the representations on the American map for each niche: 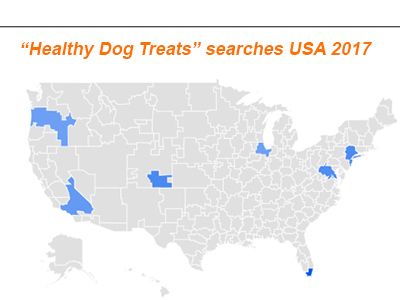 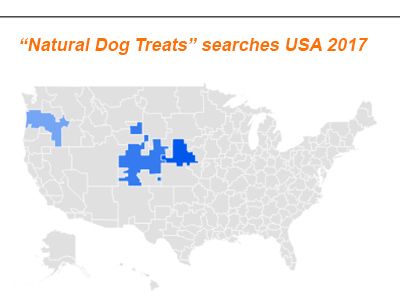 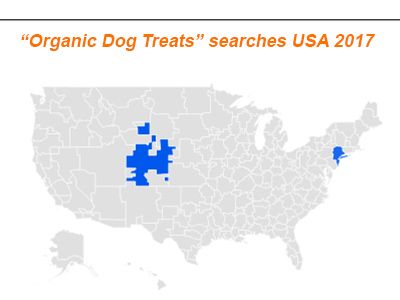 As you can see from the above maps and table, Fort Lauderdale (with 75% 2016 democratic vote) is the area that searched for healthy dog treats most per capita (equivalent to a baseline of 100%) with the second most searched place being Colorado Springs – Publo Colorado (58%).

Colorado presents an interesting proposition in this discussion, since the actual counties that the searchers resided in were Republican (most other leading metro counties were Democrat), however the overall state was Democrat.  You will also see that Denver Colorado was the ONLY location that scored high for searchers in both Natural Dog treats AND Organic dog treats.   Denver is a very progressive state when it come to new legistlations, so it seem they are progressive in their thinking about dog treats.

Portland OR and New York NY also each were scored high on one each of the other tables, suggesting that these areas are also very interested in Healthy dog treats.

While there has been some confusion over what constitutes ‘Healthy’,  natural should mean meat based (but often doesn’t) and organic should be organic certified, but usually isnt when it comes to dog food or treats. 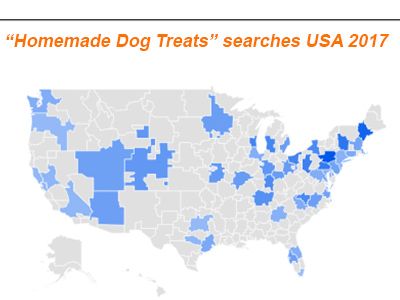 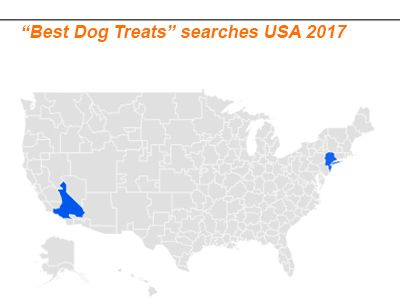 What can analysis of the ‘dog treats” map tell us?

Well the first thing it is the seed term of the whole category (only two core words), so almost every state in America will have data for it.  This also means that many Metro regions beyond the 12 in the table were recorded, but due to the high number of searches, the order and names of the metro area most likely fluctuate wildly.

The first thing you will notice is that the search areas for ‘Healthy dog treats’, tend to come from well known largish population centres or bustling metro regions,  where as  “dog treats” searches rank high for much smaller less well known regional metro regions.

This is all true except for Pittsburgh ME that makes both the “dog Treats” chart and the “homemade dog treats” trend.

Homemade dog treats, have a similar  regional appeal for searchers, but being a branch term (three keywords) the search data is a lot less than for “dog treats”.

What do “best dog treats” mean?

Well firstly there are very few searches for this term which results in only two metro regions being recognised as having any significance:  Los Angeles CA 100%,  New York NY 90%

This suggests that it is possible that an overlapping group of people in LA and in NY city are thinking that the “best dog treats” might also be the ‘healthy dog treats’.

Note,  people might also be searching for ‘healthy dog treats’ and ‘best dog treats’ in these big metro regions, because they don’t know what they are and want to be guided by Google and articles on Google.

Herein lies the rub.  If you search for healthy dog treats and natural dog treats, you are just as likely to come up with images of artificially sweetened and coloured wheat biscuits.  Nothing natural in a dogs diet and really only good in small doses (similar to grain dog food).

People are searching for healthy dog treats but it is up to what Google provides and what convincing arguments are made by each site as to what people believe are healthy dog treats. Healthy should be more obvious than a term like ‘best dog treats” as best might be measured on price or volume and not health.

Natural and organic have been misused by industry in the past to mean grain and vegetable matter that are cleanly not that natural for a carnivore based domestic dog.

You can be like the ‘rest of the pack’  and put your faith in Google telling you REALLY what “dog Treats” are or the “best dog treats” but knowing about bio-availability, I am sure that you won’t take that risk, because you have read this far.

A big test to understand how much your dog treat source understands dog nutrition is to see if the article they quote is sponsored by a big dog food company (that sells mostly wheat or grain products).  Do they advocate homemade biscuits treats (as a ruse to getting you onside). Do they give you a recipe for some kind of wheat baked goods sale that the kids can join in on  (PS dogs don’t hunt in a human’s pantry).

You will also notice that many bigger sites have NO regular articles at all on dog treats, or they sell every kind of food for every kind of animal under the sun, just citing what is on the label. They are there just to make the company profit, not understand or assist your dog’s health objectives.

If owners and corporate managers aren’t willing enough to regularly educate and communicate why they are selling specific dog food or dog treats to you and your dog,  DONT BUY THEM.

You will never know what you will end up getting, but you know you are increasing their profit at your dogs expense.