HEALTHY DOG TREATSBlogBlogHow to have a social dog, through play, socialisation, discipline – VIDEO

How to have a social dog, through play, socialisation, discipline – VIDEO 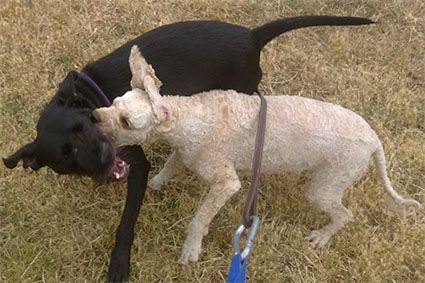 This is the back story to the second video in the amazing Ella V Archie extreme play sessions. One dog is a spoodle (cocker spaniel cross poodle) while the other is a Labrador cross unknown. The first video of epic dog play can be found here. The video also demonstrates what hard, but very social play is about.

The video shown here is the more ‘hard core’ play of the two videos on this site, and even in slow motion, you can sense how long these play sessions would go for, and how much energy both dogs expended.

I used to walk Ella professionally, and Archie is my dog. So I have a pretty good sense of their limits.

In the other article I spend some time explaining how Ella (as special needs dog as her owners put it) would often play without limits. And that was fine with a consenting friendly social dog, but not all dogs you meet in the park are social. Or as social as their owners would like to think.

When I meet new dog walking clients I will usually bring Archie along, as being a very social dog, he will instantly sort out what level of social skills the prospective client’s dog has. When we met up with Ella, we could see that she played hard, but we did not pick up on her inability to read the level of socialisation and desire to play that other dogs have.

So ironically, while Archie was a great test in a clients home. Ella was almost the perfect test of socialisation out in the field. A timid scared dog would run from her, and an aggressive dog, just would not try and show dominance, it would try to fight Ella and cause damage.

Take a picture of my dog, and you will have your answer.

He became this way because he started with good genes (two sporting / retriever dogs). It is true that not every guard dog or fighting dog stock dog will be aggressive, however an ordinary owner may have more difficulty in training and socialising a dog breed to specifically harm large animals or people.

We (owners) also give him regular discipline, exercise and affection in the right doses. Though he doesn’t have 100% recall, he is very much within acceptable levels. The fact th at he usually gets two decent walks off lead a day is my maintenance program for keeping him social.

People forget that dogs have needs, just like humans. Some people go to work just as much for the social experience as for the money. Unfortunately your dog cant choose how much play it has, that is up to the owner.

If you wonder why your dog needs the “luxury” of one good off lead walk per day, I put it this way: If dogs live seven years to our one, then one day without dog contact to your dog, is like one week without human contact for you. Not many people could stand this, but 99% of the population or more, do not exercise or socialise their dogs enough or daily for that matter.

The true test of a social dog occurs almost every day for me. When I take my dog pack (my dog and  client dogs) out for a walk, we encounter many different types of dogs with many different levels of social abilities.

When my dog approaches a timid dog (whether it was abused, the breed is timid, the dog is very young or old), he senses this an adjusts his play accordigly, or doesnt interact much at all. When the dog doesnt want to play at all and gives up many visual or aural signals, my dog generally stays away.

When my dog is approached by an aggressive or an overly dominant dog (such as alpha dobermans) he will typically stand very still and upright. He shows his full height to show that he is not easy target, and he knows not to fight as he will lose. He also doesn’t run, as that will trigger most dogs chase instinct and a big aggressive dog is likely to catch and damage him.

By the way I use the doberman as an example of dogs we have met that were VERY dominant and on the edge of fighting, I also know severl quite social doberman and have clients who get me to walk their dogs.

Aggressive and dominant are two very different things. Dogs are usually either submissive, neutral or dominant. This will be their own view of their standing in the world or their order in the pack. It can also change depending on what dog they meet.

Some breeds can typically have a preference on the domination scale.

A dominant dog is not necessarily aggressive (though to inexperienced dog people) this may appear to be the same thing. For instance while my spoodle/ cockapoo is dominant, he does not try and dominate all dogs. He chooses his targets wisely. And he plays within limits, he stops playing when the other dog gives signs that the play is over.

Domination and submission are just where a dog sees itself in the dog pack pecking order, or measured against the dog infront of it. It is not a good or a bad thing.

An aggressive dog however can be either submissive or dominant. Aggression, besides breed disposed, is also often a result of a bad incident in a dogs past, making them scared and seeing all new dogs as a potential threat. This form of aggression is fear aggression, that can easily turn to biting.

Equally bad in the park is breed specific aggression. If you breed a hunting dog to take down large animals, you want it to show no fear. Unfortunately badly regulated breeding practices can lead to breeds becoming known as unstable and a leaning towards aggression. 500 years of breeding a breed of dog to do a certain thing like kill large game means it usually wont be easy to convert that dog to an incredibly social/ safe family dog. You will often see the owners of large breeds bred by humans to kill large animals, struggling in dog parks to keep their dogs play social.

Some of these dogs can also show food guarding and nervous energy issues. When they get excited in normal play with a dog in the park, they can become ‘hyper excited’ and are  not be able to stop. Their play escalates into hard biting and drawing blood.

This fits in with the concept about ‘not blooding’ a domestic dog that has a breed that was designed to kill large animals.

Conversely I have also heard from close friends that patting and giving too much affection to a large game hunting dog has been said to weaken the dog for its task, and the broken dog is often given away or distroyed.

As a professional dog walker, with the goal or making any dog I walk social, the concept of killing dogs ia abhorrent to me.

It is funny how so many people can have different views about the same dog. Usually it is based on how a dog plays with their own dog, and their level of confidence and experience with dogs, as to how they label the other dog.

In this video you will see Ella (the big black dog) playing hard, but mostly with restraint not to damage her play partner.

The thing is that other dogs that don’t know her, don’t know that she just has a social issue, not an aggressive issue, and if the new dog is not social, they will either become aggressive to her (try and bite) or run. This then can lead Ella into a high excitement state of wanting play even more. And yes, this is why Ella was on lead for many of the walks, for her own protection.

I hope you enjoy the video and perhaps understand a little more about dominance and aggression.

Article by Bruce Dwyer. If you wish to use any of this information please refer to the link www.healthydogtreats.com.au

Previous reading
Chicken breast dog treat VIDEO – how to eat it
Next reading
Kangaroo stick dog treat, VIDEO of how to eat them.