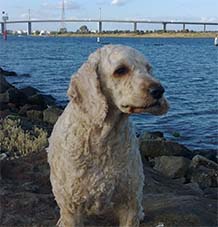 I openly admit that this is an article to accompany a Canity (Vanity dog video).

Not just because I can, but because I enjoy filming dogs doing interesting things, and in particular what they were meant to do. In this case this is the article accompanying the embedded video of my dog Archie tracking rabbits in an industrial estate, among gas pipelines.

Before I get into the mechanics of dog behaviour and the video too much, I have to say that no rabbits were found or hurt and that Archie was not forced to track the rabbits. The park is in an enclosed area, close to the city, where there have been no sightings of snakes.

This last point is a very interesting one in itself. I hear many people telling me (a professional dog walker) that they will not take their dogs to off lead parks during summer in case they are bitten by a snake. Yes this is a valid fear, and in fact most parks in my area have council signs up saying to beware of snakes, but this mostly seems to be to defray council responsibly if your dog gets bitten.

The ridiculous side-effect of this concern over snakes, is of course many dogs don’t get proper exercise over summer, and in particular don’t get to learn how to be social. The dogs and owners can become fat and ill tempered.

I minimise snake concerns by taking walks in parks mostly early in the morning or late in the afternoon. Yes snakes will be out in summer, but they are usually considered sluggish in temperatures below 25 degrees Celsius.

I take walks In areas that mostly have grass and not a lot of bushes to hide snakes. I walk in parks that have a lot of dog traffic. As the dog’s lay layer upon layer of urine markers, snakes and other prey are loathe to visit these areas.

The dog video tracking among the pipes

Initially you will see my dog taking a wide circle around the pipes and having a roll on the grass. He knows that there are not a lot of rabbits in the open and they are going nowhere (it is the centre of the park). Of course one of the main reasons he is investigating the pipes is that there are a lot of warrens around them and a lot of rabbit scents. It also helps that I am standing on a cross member between the pipes (yes until my dog finds a rabbit, he will often stay relatively close to me).

The video is shot with very few edits. I could have taken an hour of him tracking the scents but that would have tired him out in the relative heat of summer and it would have bored the viewer.

It always amazes me how different dog breeds are in their ability to track scents. All domestic dogs are evolved from the wolf but in that man-made evolution, different wolf traits were either enhanced or suppressed.

Scent is by far the greatest dog sense, then vision and hearing are relied upon. So you would think that all dogs would fastidiously be tracking scents wherever they go. But this is far from the case. Many dogs were bred as lap dogs (because the could remain still and not require a lot of exercise) or they were bread for protection, herding, fighting etc. This meant that their skill and interest in tracking is considerably diminished.

Archie’s core skills set lies directly in the middle of tracking. In fact he is created from two of the greatest tracking dogs in existence, the cocker spaniel and the poodle. These dogs were both bred to go into swamps and retrieve fallen birds, so they had to be able to negotiate many different terrains and isolate prey smells even in scent diluting water.

In various ‘cop’ programs you will often see the springer spaniel or cocker spaniel performing scent tasks such as drug or money locating. By me allowing him to run among these pipe, I am giving him great satisfaction as he ‘earns’ his evening meal from me. No I have not trained him for any particular tracking task, and this is all natural, but as you can see he really relishes the task. But more than that, it is keeping him physically and mentally fit.

We enjoy the opportunity for these solo adventures as much as his social off lead walks in the mornings. If you want your dog to be anywhere near as happy, I suggest you find what they were bred for (even in mixed breed dogs) and see how often you can satisfy those NEEDS.