What are the search trends for ‘dog food’ & ‘dogs’ online in Australia, USA and UK? 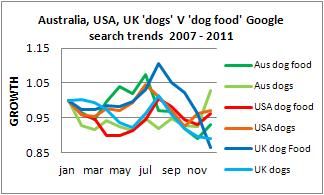 The one thing that is critical to the survival of domestic dogs is good dog food. While I personally believe this can be obtained from the butchers, I thought it would be interesting to see how often or when people search for “dog food” online.

To see if there is any trend or correlation in when they search for ‘dogs’ in general and how different countries compare in their search for ‘dog food’.

Because of its market dominance, Google trends data was used. As Australia, United States and UK are the leading dog information online searches per capita, these countries were analysed.

The one major growth rate point to consider is that Google trends data shows the growth compared to the ALL other Google searches. So a graph that starts at 1.0 (January) and ends at 1.0 (December) is growing as fast as the rest of Google searches and in absolute terms is probably growing positively.

As you can see from the graph there appears to be a large spread in search trends between the years. However this is mostly caused from the starting points. That is, the January data for each year is taken as the reference point for that year and so for 2008 it just happened that January had an exceptional number of searches for the term dog food for that month, and so all the following months data are ‘dragged down’ for that year on the graph.

So it is not so much a question of whether all years exactly line up, but whether they have a general upwards and downward trend for specific times of the year. The BLACK line represents the five year average and as you can see the majority of years tend to follow the average line trend. This shows that typically there is a slight lull in searches for ‘dog food’ in February and March before a continual upswing in search numbers until peak in JULY each year. After July there is a symmetrical decline in search numbers until November were the search volume is typically 10% down.

You will see that December is on average about 7 % below the January value. While Google market dominance has been increasing over the years, over the last several years it has been increasing at a decreasing rate (because it has reached saturation point). Also it may be that all other searches are increasing faster than the searches for ‘dog food’ which like ‘human food’ is a generic term or commodity and is not expected to see a massive growth in internet searches. That said, many reports suggest that dog ownership in Australia has been in decline over the last five years, which would correlate well with the observed decline in dog food searches in Australia. 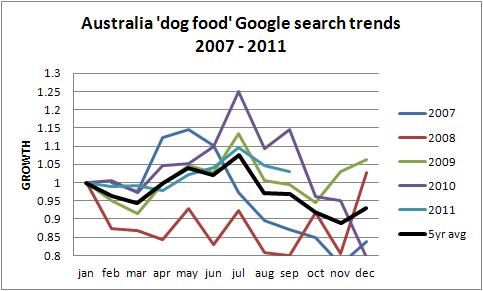 The United States Dog Food trend graph is plotted on the same scale as the Australian graph for easy comparison. Except for the large spike in 2008 around September, the majority of the USA years are much closer to the average USA trend line than in Australia’s years are to its average trend line.

Surprisingly the US trend is similar to the Australian trend. Similar in that it has a similar peak month, August for USA, and surprising because the analysis of searches for ‘dogs’ in different countries previously showed that summer and winter trends (which are 180 degrees out of sync for northern and southern hemisphere countries such as Australia and America, can displace peaks by 180 degrees too.

Like Australia, USA also has a decline in dog food searches for February and March, however its decline continues into April where it steadies out until June. Then July and August are the upswing months (even though the peak is only at the same growth rate as January (parity or 1.0 ).

After August dog food searches have a slow decline until November then a 3% upswing in December, potentially for Christmas shopping, finishing the year around parity (note two years are up two years are down). 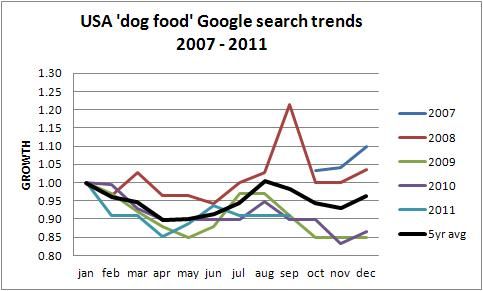 The dog food trend in the UK is quite similar to the USA except that its first six month trend has less of a dip than in the US, but the decline in searches from October to December is much more pronounced.

The UK is the highest dog related search country in the developed world and has one of the highest dog ownerships in the real world. While the UK has been suffering several economic set-backs in the last few years, the dramatic drop in yearly searches for ‘dog food’ by 15% on average each year is of concern to the health of their dog industry. 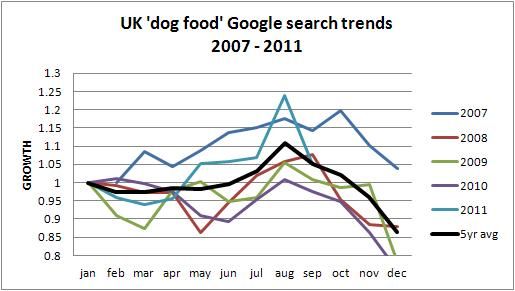 To get an indication of whether a search term trend is truly unique, it is always good to compare it to the core term of that industry. For the dog industry one of the highest search terms is the generic term ‘dogs’.  The graphs below compare the five year averages for Australia, United States and UK for the terms ‘dogs’ and ‘dog food’.

Firstly it can be seen that the two Australian terms ‘dogs’ and ‘dog food’ have quite different patterns. While the term ‘dogs’ spends most of the year oscillating around -7% growth it has its peak months of January and December with an average yearly growth, compared to the whole search market, of +3%.

The American trends are shown in red (dog food) and orange (dogs). These two graphs are more similar to each other with the search term ‘dogs’ peak leading ‘dog food’ by one month, July compared to August. While America’s dog population is believed to be growing, both the term ‘dogs’ and ‘dog food’ end the year around 4% down.

The two UK trends also look quite similar to each other even sharing the same search volume peak in August. While the search trends are the most correlated of all three countries, the search for ‘dog food’ in general has much more growth throughout the year with the peak being 10% higher than for the ‘dogs’ peak. ‘Dog food’ searches end the year almost down 15% from the start of the year. 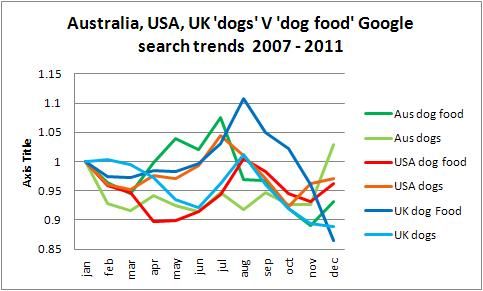 Each country has definite trends for when people search for dogs and dog food.

Australia has the most volatile search history for ‘dog food’ and a peak around July of +7% but ends the year down -7%.

America’s online searches for ‘dog food’ fluctuate between parity (peak in January) and minus 10% ending the year -4% down.

The UK has a ‘dog food’ searches peak around 10% in August for its five year average, then drops by year’s end nearly 15% compared to the average online search growth.

When all three countries are compared together, for the terms ‘dogs’ and ‘dog food’ it appears that all countries and terms (except Australia ‘dogs’) have a peak in search volumes in either July or August of each year. The only country and search term to exceed general market growth is Australia for the term ‘dogs’, up 3% over the year.

What might this tell us about people interest in dogs and dog food online? It shows that for some reason mid-year (winter in Australia and summer in USA and UK) that people are more actively seeking information about dogs and how to feed them. It shows that in general over a year these search habits are keeping up with the general growth of internet searches, so the dog market is steady. It also shows that on average, all of these fluctuations occur between -10% and +10% search volume growth, which may not seem a lot, but is typically much higher than most country’s current CPI growth rates.