HEALTHY DOG TREATSBlogBlogDog Food, dogs in the wild, dogs at home what is natural dog food?

Dog Food, dogs in the wild, dogs at home what is natural dog food? 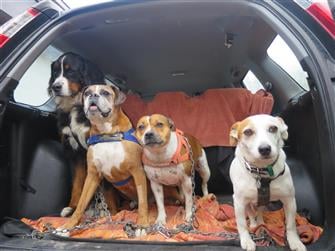 What is dog food, what is not dog food?

Dog food by definition should be anything that a dog eats that doesn’t harm it, AND actually helps it grow, repair, maintain health.

The Aafco organization in America has created a table used the world over (and in Australia) as the minimum-maximum nutrients that must be in a bag or a can to be called commercial dog food.

In the wild dogs eat mainly meat and meat by products like bones and offal. They eat very few berries, some grass by way of prey stomach (1%) and non grains and very few vegetables (they are not herbivores).

So given this information why do I continue to be visited by people at my healthy dog treat stall at markets who tell me of the wonderful amounts of grains, pasta and rice their dogs are given, plus a whole host of vegetables “that they just love” with a side dish of meat.

If you have been to Coles or Woolworth’s lately, you will find that none of the dog food containers has any indication of the total amount of meat in the packets or the total amount of carbs. Not that anyone reads these things for their dogs – but there is no legislation requirement for pet food.

If you buy a kilo of any whole meat, you are likely to pay $10- $15 for the fatty stuff with bones, but only around $5 maximum for most vegetables. MUCH less for a big bag of rice (on a per kilo basis). Do you think there is a correlation between this and what ends up in dog food packets?

Most people are amazed that dogs in the wild hunt for their food and don’t eat from cans or plastic bags.  And the things they hunt are called animals and these animals make up 95% of their diet.  That there are very few carbs inside of these animals when they eat them (even if the prey has a full stomach).

In the wild, there are things called Carnivores and Herbivores.  A few of the animals cross over into omnivore territory like humans, but very few stray very far from either end of the spectrum. They evolved to be one or the other. Their teeth, jaws, stomach, intestine all evolved to handle one or the other food inputs.

Herbivores grind their food into a pulp. Have an enzyme in large quantities in their mouth and stomach to decompose the vegetables and a LONG intestine to process the vegetables that take a long time to extract nutrition from.  The poor nutrition on bamboo is one reason why panda bears have to eat so many tonnes per week and nearly starve.

Carnivores, on the other hand, have very little amylase in their mouth, some in their stomach. They have strong jaws and sharp teeth for ripping meat, but not for grinding side to side like cows. They have a very high acid content in their stomach for quickly extracting nutrients (essential amino acids in particular), and very short intestines for expelling waste that is often high in bad bacteria counts from decomposing meat (scavenged meat food sources).  Can you guess what kind of system your dog has?

If you have ever walked a dog in the park off the lead, and it has not had most of its original behaviour bred out of it for show purposes you will usually find it putting its head down tracking prey. The dog walk is a simulated hunt with the owner as of the pack leader. The dogs are coordinating among themselves to get the job down to hunt animals, to find MEAT to eat.

When a domestic dog gets a meat jerky dog treat at night (and it isn’t able to swallow it all at once) it will love the process of sitting down and holding the treat between its paws. It will rip and shred the meat with its powerful teeth. It will chew a little bit, and the meat will be dissected by the high acid content of its stomach.  The whole process of this is primal and fundamental to the enjoyment of the dog, as it was meant to be.

If you have ever seen a dog eat a bowl of kibble or wet can “food” you will know that it was designed for them to shovel in, over-eat and you to buy more. Dogs eat fast because in the wild they are worried about other carnivores stealing their food. But they actually use their teeth and jaws in the wild to pull food apart. Soft easy to consume food just makes a domestics dogs jaws week, gums weak, teeth dirty and teeth that will eventually fall out well before their time.

Some of your healthy dog treats should be a jerky style to acts as teeth cleaners as well as exercise your dog’s jaw and keep their gums healthy. They will also provide the meat based essential amino acids that your dog craves for all of its normal biological functions.

Blog
Comments for this post are closed.
Previous reading
What are homemade dog treats made of?
Next reading
Only a few days until gourmet dog treats are made incredibly briefly insanely cheap