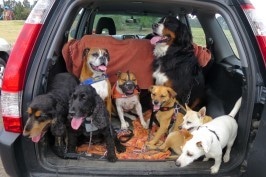 Rarely do such splendid dog pictures accidentally manifest in the boot of my car. When they do I call them a Christmas dog picture, one picture perfect for any Christmas card, for any dog lover.

You might think that is going a little too far, but perhaps you should see the ‘before shot’ below, and the reason for the difference.

THE AFTER OFF LEAD DOG WALK PHOTO

After a long off lead walk, and the dogs have played hard and got to know each other again, and even more, all of their energy is burnt, and they have socialised as a pack, THIS sitting arrangement happens.

They sit like this because they are relaxed, they have nothing left to prove, they have sniffed and catalogued all of the scents that they need to for the morning.

This is their function as dogs fulfilled, not sitting at home wondering why they can’t be with their own kind on a simulated dog hunt.

They have jumped in one by one and made room for the other dogs. How does this preferential paring take place?

From Left to right:

The two cocker spaniels live together and are used to their own company. This was their FIRST WALK ever with the dog pack so it make sense they would buddy up in the car.

Behind them are the boxer Chloe and Apache the staffy. They also live together and in the car the staffy often enjoys nuzzling under the Boxer dog.

At the back right is Amy the bernese mountain dog. She always prefers one of the back corners for security. she jumped in first and chose this corner today. However unlike the before shot they are not both trying for the same back corner.

Front right you have the little jack Russell faction. Tilly the white jack Russell has been placed in the front right corner for years, so it is natural for her to be there. Harry the jack Russell corgi cross is the oldest dog in the car and least tolerant of abuses of dog play power, but he has an affinity for Tilly from a breed perspective.

Louie the little brown pup behind these two and in front of Amy is a free agent. He normally plays hard with Apache the staffy in the park, but in the car will often fluctuate between being submissive to Amy and licking any other dog that will stand it for long.

They don’t always arrange along factions so completely. And perhaps its the unknown factor of the new cocker spaniels, but as you can see the seating arrangements they have made make perfect sense. This is the Christmas card photo!

Note all of these dogs are very social, so they could have sat anywhere, as they often have to on the initial pick up run for the park, but they don’t seem to look as relaxed or as natural in the before off lead dog walk photo. 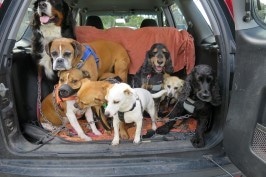 THE BEFORE DOG WALK PHOTO

FB Haters like to consider that the ‘B’ shot is somehow dangerous or whatever their random thoughts can put together. They of course were not in the car and are very unlikely to spend as much time with dogs in dog parks or these particular dog. They don’t know that this is how the dogs chose to arrange themselves, pre-walk. Pre walk there are always a lot of nerves from excess energy from dogs that have known each other for years. The dogs are all social, so there is no issue with fighting, it just doesn’t look as neat as the after shot as explained above.w

The fact that it is not pretty in a human perspective is besides the point. That is how the dogs chose to arrange themselves, making do with who was in there first. Pre walk dogs will sit more awkwardly in the car. After each dog jumps in or I lift them in, they sit next to the dog they are happy with sitting next to or where there is space, and I hook their harness up to a chain fixed to the car body. My business is always about safety first.

As mentioned before, Amy is usually one of the first and largest dogs in the car BEFORE the walk, and she always wants the back corner spot. When Chloe the boxer gets in she favours that position too for some reason, she kind of backs into Amy. Apache the staffy lives with the boxer, and for whatever reason often prefers sitting under Chloe.  THAT is how the photo might appear to look cramped, they are each vying for the same corner, and nervous energy of getting to the park doesn’t have them think through a better sitting option.

As the photo above shows, there is plenty of room for every dog, and a few more if I was walking them. They are all harnessed and sitting comfortably, just not as aesthetically pleasing as after the walk.

The other major difference in the A and B shot here is that the two black cocker spaniels you can see also live together, but it was their first day with the pack today. That means they had very little time to assess which dogs were in the car, but they sensed that they were all social because on pick up they immediately jumped in.