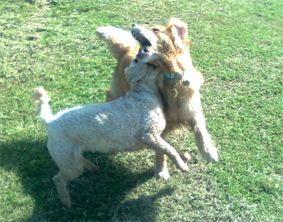 In a previous report on dog breed list popularity I analysed the leading dog breed searches on Google in leading developed countries of Australia, United States, Canada, UK and Ireland. The reason that these countries were chosen is that they are the leading search volume per capita countries in the world when it comes to online interest in dogs.

The August 2011 update shows that the labrador & golden retriever have now globally challenged the German Shepherd as most popular dog breed!

The reason that Google is used is that it is the leading search engine in most developed countries in the world so a fair comparison across countries can be made. It is noted that while its data can be fairly blocky (not updated that regularly) it is fine for showing trends. More than that, google dog searches are likely to lead real world dog purchases so dog breed popularity can be easily plotted over a year or so (history) as well as projected into likely real world ownership (future intentions). For this analysis popularity is classed as the number of month searches for a breed as compared to the leading breed dog. For instance a popularity of 50% means that the dog breed has half the number of Google searches per month as the most popular dog.

The first most popular dog breed list was compiled for Google March 2011 data. The tables below update this information for Australia, America and the UK as well as Japan for August 2011. The main difference this time in the analysis is that previously breed puppy searches were filtered out of the results, while this time they are included.

In March 2011 the German Shepherd had the most Google searches of any dog breed in Australia and America and was second in the UK.

In August 2011 in Australia the Labrador replaced the German Shepherd as the leading dog breed searched for with 9,900 exact searches per month on Google (across its search and affiliate network). And while the top five dog breeds remain essentially the same as the previous most popular dog breed list, the popularity of the bottom six breeds are 55% or below the popularly of the leading dog, the Labrador.

In March while the French bulldog was the second most popular breed (82% of the German shepherd search numbers) it was not even in the September top ten most popular dog breeds. In a reverse trend the Staffordshire bull terrier has risen from outside of the top ten to be the fifth most popular searched breed.

The first of the puppy breeds is the German shepherd puppies coming in seventh at 36%, followed by Labrador puppies – two variations on search terms. This means that in reality the Labrador occurs three times in the top ten and so is by far the most popular dog breed in Australia at the moment.

Due to America’s large population (308 million people) and it being one of the highest dog ownership countries on earth, the most popular dog trends for this country has implications for all others. Unlike Australia, America retained the German shepherd as the most popular dog breed search in September 2011 with 135,000 exact searches per month.

The second placed Pomeranian (81%) and the third placed golden retriever (67%) both made surprise entries into the top ten most popular dog breed lists for America.

The American top ten most popular dog list for September also includes two puppy breeds: German Shepherd puppies (30%) and boxer puppies (30%). An even more telling trend is that now the list contains a designer dog the ‘cockapoo’ which is a mix between a poodle and a cocker spaniel. In Australia this dog is known as the spoodle.

The UK is the most highly dog online searched country in the developed world. So the most popular dog breeds in the UK online have particular strong implications for real world ownership of those breeds.

The staffordshire bull terrier that did not appear in either the UK or Australia’s most popular dog lists in March is now equal third in the UK at 67% and fourth in Australia at 55%.

It appears that the popularity of the French bulldog has taken a severe decease between March and September of 2011 with it being second on the Australian and American list in March and third in the UK and NOT on any of these three countries top ten popular breed lists in September.

For comparison with a highly developed, low dog ownership country, Japan is a perfect case to analyse. In Australia the leading dog breed term ‘german shepherd’ had 9,900 searches, while in Japan their leading breed, the golden retriever, only had 480 searches per month.

Remarkably even though the Japanese are so pressed for space, the dogs they search for online are typically large dogs (top four being golden retriever, Labrador, Pomeranian (small breed), german shepherd).

Another interesting point of difference is that the sixth most popular dog in Japan (English bulldog) is only 29% as popular in terms of searches as their leading dog the golden retriever. So popularity of dog breed search terms quickly drop off in Japan.

While the German Shepherd was the overall most popular dog in Australia, America and UK in March, it has dropped to second on the list in Australia and the UK.

The cocker spaniel which did not rate on any of the top ten  lists in March has risen to sixth most popular in Australia (44%), fifth in America (37%) and equal most popular in the UK.

For the first time the cockapoo (spoodle in Australia) now appears on two of the dog breed lists – sixth in America (30%) and equal second in the UK (82%).

Original research & Analysis by Bruce Dwyer. If you wish to use any of this information please refer to the article as a reference and provide a link to https://www.healthydogtreats.com.au

Previous reading
What are the search trends for ‘dog food’ & ‘dogs’ online in Australia, USA and UK?
Next reading
SHIPPING